Minecraft In The Classroom: The Power Of Game-Based Learning. Editors Note: This post is part of a series being developed collaboratively between Minecraft EDU and Teaching Channel. 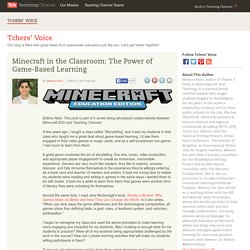 A few years ago, I taught a class called “Storytelling” and it was my students in that class who taught me a great deal about game-based learning. I’d see them engaged in their video games or magic cards, and as a self-proclaimed non-gamer, I had much to learn from them. A great game combines the art of storytelling, fine arts, music, video production, and appropriate player engagement to create an immersive, memorable experience. 12 Surprising Things Your Child Can Learn from Minecraft. Video gaming has been seen by some detractors as a passive, mind-numbing activity that has an adverse effect on children’s social development. 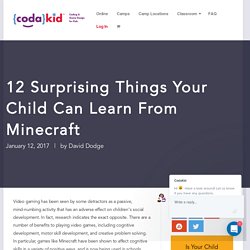 In fact, research indicates the exact opposite. There are a number of benefits to playing video games, including cognitive development, motor skill development, and creative problem solving. In particular, games like Minecraft have been shown to affect cognitive skills in a variety of positive ways, and is now being used in schools across the globe for its surprising educational benefits. With this infographic we explore 12 Surprising Things Your Child Can Learn From Minecraft, and in doing so, unlock some of the most important reasons why the game is considered the greatest educational game of its generation.

Please include attribution to www.codakid.com with this graphic. Links for 12 Surprising Things that Your Child Can Learn from Minecraft Are there any other academic concepts or learning lessons that kids can learn from playing Minecraft? Piper Computer Kit - award winning STEM learning toolbox. ﻿Frequently Asked Questions. 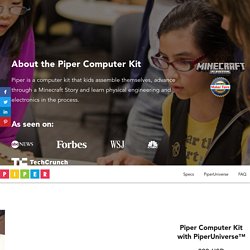 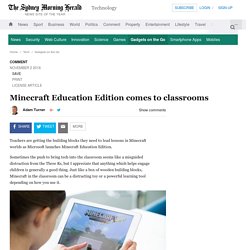 Sometimes the push to bring tech into the classroom seems like a misguided distraction from the Three Rs, but I appreciate that anything which helps engage children is generally a good thing. Mod Minecraft Pi with our latest Essentials books. Minecraft: Education Edition early access is here! Hello! 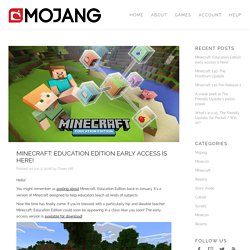 Even though this is an exciting announcement, it’s worth remembering that this is the early access version of Education Edition. Real Artworks in Virtual Minecraft Worlds. About ETR Community EdTechReview (ETR) is a community of and for everyone involved in education technology to connect and collaborate both online and offline to discover, learn, utilize and share about the best ways technology can improve learning, teaching, and leading in the 21st century. 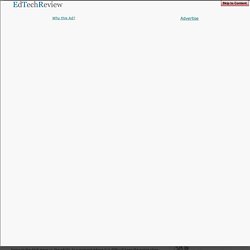 EdTechReview spreads awareness on education technology and its role in 21st century education through best research and practices of using technology in education, and by facilitating events, training, professional development, and consultation in its adoption and implementation. 6 Minecraft lessons offer a motherlode of learning. Use Minecraft to teach math. School's out for summer? Not for Minecraft Education Edition. Minecraft is already a hit at schools. 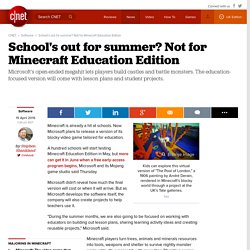 Now Microsoft plans to release a version of its blocky video game tailored for education. A hundred schools will start testing Minecraft Education Edition in May, but more can get it in June when a free early-access program begins, Microsoft and its Mojang game studio said Thursday. Microsoft didn't reveal how much the final version will cost or when it will arrive. But as Microsoft develops the software itself, the company will also create projects to help teachers use it.

"During the summer months, we are also going to be focused on working with educators on building out lesson plans, sharing learning activity ideas and creating reusable projects," Microsoft said. The Minecraft Generation. In its first year, Minecraft found popularity mostly among adult nerds. 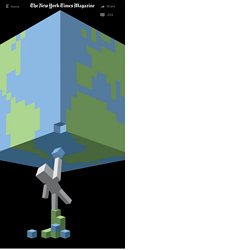 But sometime in late 2011, according to Alex Leavitt, a Ph.D. candidate at the University of Southern California, children discovered it, and sales of the game exploded. Today it costs $27 and sells 10,000 copies a day. (It’s still popular across all age groups; according to Microsoft, the average player is between 28 and 29, and women make up nearly 40 percent of all players.) Persson frequently added new features to the game, like a “survival mode,” in which every 20 minutes evening falls and monsters attack — skeletons shooting arrows, “creepers” blowing themselves up when they get close to you — forcing players to build protective shelters.

(“Creative mode” is just about making things.) Persson also made it possible for players to share their works. The game was a hit. — Required MinecraftEdu Update and Other Changes. For the Hesitant Teacher: Leveraging the Power of Minecraft. If there’s any video game that has successfully made its way into the classroom, it’s Minecraft. 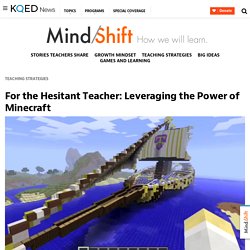 There’s a small subset of teachers using all kinds of digital games in interesting ways, but the blockbuster hit Minecraft and its educational counterpart MinecraftEDU have reached much wider audiences. But getting started with MinecraftEDU can be intimidating for teachers who don’t consider themselves “gamers” and aren’t sure how to harness the engagement and excitement of Minecraft. Luckily, there’s a robust and global Minecraft teacher community to supply tips, support and even lesson plans. Teachers who already use Minecraft in the classroom love it because of the flexibility it offers — almost any subject can be taught with a little creativity. Untitled. For the Hesitant Teacher: Leveraging the Power of Minecraft. How 'Minecraft' is Transforming Developing Cities Around the World. In Haiti, a waterfront in the poorest part of Le Cayes is getting a makeover. 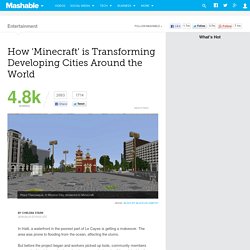 The area was prone to flooding from the ocean, affecting the slums. But before the project began and workers picked up tools, community members were asked to pick up a keyboard and mouse and reimagine this park inside of Minecraft. It's part of the United Nations' Block by Block program, which asks community members to redesign public spaces in need inside the popular sandbox game that allows players to build anything within the limits of their imaginations. Minecraft With Multi-Age. Your report has been submitted. There was a problem submitting your report. Please contact Adobe Support. Report Abuse If you feel that this video content violates the Adobe Terms of Use, you may report this content by filling out this quick form.

To report a Copyright Violation, please follow Section 17 in the Terms of Use. Minecraft Officially Comes to Schools, But Teachers Have to Do All the Legwork. Microsoft has announced Minecraft: Education Edition, a brand-new version of the best-selling building game. The concept is that kids love Minecraft - given the fact that it remains on the top of sales charts - and combining the game with educational subjects should improve the learning process. The announcement coincides with Computer Science Education Week and the Hour of Code, an intiative Mojang already has Minecraft-specific content available for. This isn't a new idea for Minecraft, as the MinecraftEdu mod has been around since 2011. In fact, many of the ideas here came straight from MinecraftEdu, as created by TeacherGaming. The mod has allowed educators to bring students together in the virtual world and learn a variety of subjects. "Geeky teachers have brought Minecraft to subjects ranging from history to biology to probability," wrote University of California professor Mizuko Ito on BoingBoing.

Minecraft: Education Edition - Resources. Minecraft With Multi-Age. Untitled. Minecraft could be coming to your child’s classroom. Kids would probably want to play Minecraft more than they want to do their homework. Now, the popular game may become their homework. Microsoft is launching a new version of the game that's made specifically for schools. >> Read more trending stories The game, which is owned by more than 22 million people worldwide, has users build virtual worlds using blocks. There's no storyline players have to follow, rather, they create their own worlds and stories, CNN reported. Teachers already are using the game to teach coding, math, history, geography and engineering without the education-specific version. There could be concerns about kids not socializing with each other because of the game, but the opposite is true. Rafranz Davis told CNN that kids end up working together on group projects and the students become the teachers and help their instructors.

While some upgrades to the game will come out with the school version, developers said they will be minor, according to The Verge. How Minecraft Is Educational. Does your child spend hours at their computer or game console playing Minecraft ($20)? Well, that may not be a bad thing. Targeted toward kids between the ages of 9 and 15, this simple building-blocks game is one the few that successfully educates and entertains players.