12 Surprising Things Your Child Can Learn from Minecraft 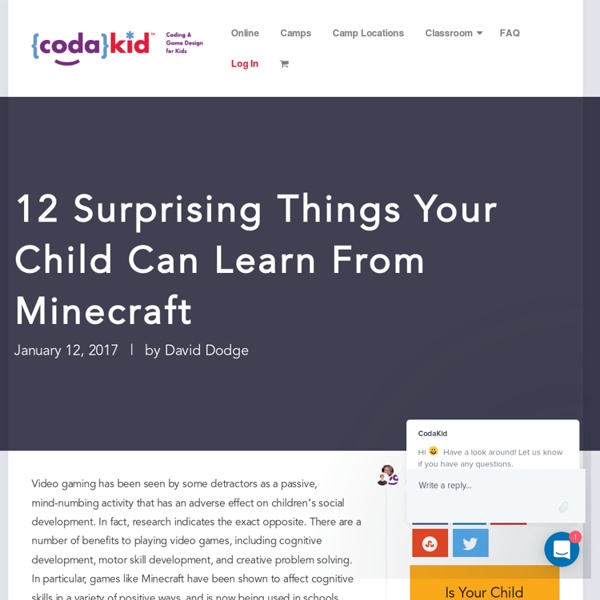 Video gaming has been seen by some detractors as a passive, mind-numbing activity that has an adverse effect on children’s social development. In fact, research indicates the exact opposite. There are a number of benefits to playing video games, including cognitive development, motor skill development, and creative problem solving. In particular, games like Minecraft have been shown to affect cognitive skills in a variety of positive ways, and is now being used in schools across the globe for its surprising educational benefits. With this infographic we explore 12 Surprising Things Your Child Can Learn From Minecraft, and in doing so, unlock some of the most important reasons why the game is considered the greatest educational game of its generation. Please include attribution to www.codakid.com with this graphic. Links for 12 Surprising Things that Your Child Can Learn from Minecraft Are there any other academic concepts or learning lessons that kids can learn from playing Minecraft?

Use Classic Games to Ignite Student Engagement As a new middle school media specialist in a school that serves students in grades 5 through 8, I spent most of last year collaborating with Sara, our school's instructional technology facilitator. We focused on converting our media center from a traditional library model into a learning commons model. This model updates the library from a storehouse of information to a place where students can interact with information, learn 21st-century skills, and create content and materials in a whole new way. Our language arts, social studies, and science teachers were quick to see the value in our new learning commons. But many math teachers didn't see the relevance to their subject area. After I regularly pursued a particularly skeptical math teacher, he finally agreed to give our learning commons a whirl.

Just released Visuino version 7_8_2_259 with YahBoom BBC micro:bit robot support Just released Visuino 7_8_2_259 Added YahBoom BBC micro:bit robot supportImproved BBC micro:bit supportImproved NeoPixels support for ESP32Reduced Memory Usage by most Motor Control componentsReduced Memory Usage by the WiFi, Ethernet, and GPRS componentsReduced memory usage by SPI SSD1306 DisplayImproved ST7735 Display implementation with reduced memory usageImproved PCA9685 PWM implementationImproved RGBW Ramp To Color componentA numbed of Visuino IDE improvements Where History Comes Alive: Augmented Reality in Museums “Museums will need to do everything they can to engage with their public, through their displays, education and outreach programs, and by being as open as possible to what their audience wants. Museums are much more than repositories of objects; they are meeting places for people and ideas. Their future depends on remaining a dynamic part of the public realm.”

MinecraftEdu: The Craft Of Digital Citizens MinecraftEdu: The Craft Of Digital Citizens by TeachThought Staff Originally released in 2011, Minecraft quickly found a place in classrooms around the world. It was dead simple to use–at its simplest you stack digital blocks, and its most complex you can recreate entire cities, create video games within the video game, (roughly) functioning ecosystems, and more. Full STEAM Ahead: Why Arts Are Essential in a STEM Education In December of last year, Old Navy was caught up in a controversy over a tee shirt design in which the word "Artist" was crossed out and replaced with either "Astronaut" or "President." The internet was full of artists and scientists sharing their stories about how art was actually an important part of their lives. There was even a photo of former President George Bush, now an aspiring artist, making its rounds.

3 Ways to Use Game-Based Learning What exactly is game-based learning, anyway? Is it a roomful of children playing video games? Is it students designing games? Or is it both of these? Digital Technologies Hub Level F - 2: Follow, describe and represent a sequence of steps and decisions (algorithims) needed to solve simple problems (ACTDIP004) Level 3 - 4:

Learn to Play: Minecraft in the classroom Imagine being eight years old today. You pack your bag, hop on a bus, act like your crush has cooties and go through lessons on history, English, maths, science, and... Minecraft? BBC micro:bit unveiled STEMNET is proud to be partnering with the BBC to raise awareness of the micro:bit with schools right across the whole of the UK. Teachers can now register to get micro:bits for 2015 Year 7 classes at: The BBC micro:bit is a codeable device that will do whatever the children who get one program it to do.