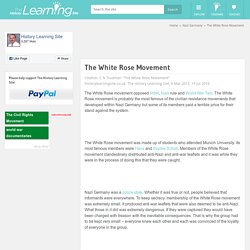 Nazi Germany was a police state. The White Rose movement was active between June 1942 and February 1943. One of the leaflets entitled “Passive Resistance to National Socialism” stated: “Many, perhaps most, of the readers of these leaflets do not see clearly how they can practise an effective opposition. Sophie, Hans and Christoph Probst were the first to be brought before the People’s Court on February 22nd 1943. No Cookies. Absurd propaganda postcards warning men about the dangers of women’s rights, early 1900s.

Battle of Fromelles: Centenary of ‘worst day in Australian military history’ ‘An attack that went wrong in just about every way you can imagine’ Remains of a shell damaged farm on the Fromelles battlefield, an area in which the 5th Australian Division suffered heavy casualties in an attack on 19 July 1916. 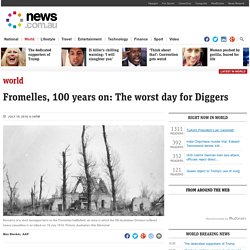 Picture: Australian War Memorial IT WAS the worst day in Australian military history, an action described by one commander as a “tactical abortion” which succeeded in killing and wounding thousands of soldiers for no gain whatsoever. From the evening of July 19, 1916 — a century ago today — Australian troops attacked German lines, held a small section overnight and were expelled with casualties of 5533, including 1917 dead and 470 prisoners.

In this one inconsequential 14-hour action, Australia lost almost a quarter of what was lost in eight-months at Gallipoli. So ended the Battle of Fromelles, the first major action involving Australian troops on the Western Front of France in World War I. The name comes from a village behind German lines, which wasn’t the objective and which Australian troops never came near. Soldiersequipment. BBC Bitesize - What was it like in a World War One trench? 10 Photos of Life in the Trenches. Remembrance Day teaching resources - HTML Content. These Remembrance Day teaching resources include a range of presentations and activities that will help your students to understand why 11 November is significant and to commemorate those who have lost their lives as a result of war. 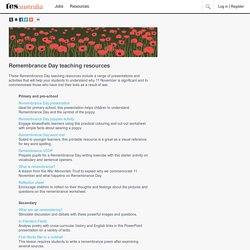 Primary and pre-school Remembrance Day presentation Ideal for primary school, this presentation helps children to understand Remembrance Day and the symbol of the poppy. Remembrance Day poppies activity Engage kinaesthetic learners using this practical colouring and cut-out worksheet with simple facts about wearing a poppy. Remembrance Day word mat Suited to younger learners, this printable resource is a great as a visual reference for key word spelling. Remembrance VCOP Prepare pupils for a Remembrance Day writing exercise with this starter activity on vocabulary and sentence openers. What is remembrance? Reflection sheet Encourage children to reflect on their thoughts and feelings about the pictures and questions on this remembrance worksheet. Some Study That I Used to Know (Gotye Parody) Australian troops entertaining themselves at the front-line. Australia is widely regarded, by others and ourselves, as a sport-loving nation with a larrikin sense of humour that knows how to have a good time and is not afraid to thumb its nose at authority. 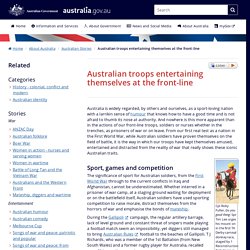 And nowhere is this more apparent than in the actions of our front-line troops, soldiers or nurses whether in the trenches, as prisoners of war or on leave. From our first real test as a nation in the First World War, while Australian soldiers have proven themselves on the field of battle, it is the way in which our troops have kept themselves amused, entertained and distracted from the reality of war that really shows these iconic Australian traits.