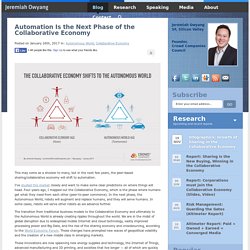 Its growth and influence has made it the globe’s top location for innovation, STEM jobs, IT patents, venture capital funding, and Internet and software growth, and Unicorn startups galore. Tracking the Trackers: Where Everybody Knows Your Username. Click the local Home Depot ad and your email address gets handed to a dozen companies monitoring you. 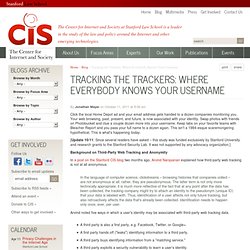 Web Companies Agree to Support 'Do Not Track' System. Joseph Turow: How Companies Are 'Defining Your Worth' Online. Google sugarcoated privacy policy changes to mislead users, group charges. The Center for Digital Democracy sent a complaint to the Federal Trade Commission Wednesday asking it to find Google in violation of a 2011 consent order, conduct an investigation and request the search giant postpone the rollout of its new privacy policies. 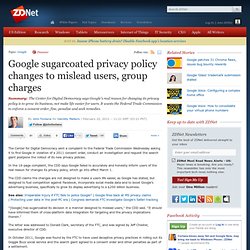 National Strategy for Trusted Identities in Cyberspace. David Birch: Identity without a name. Google Busted With Hand in Safari-Browser Cookie Jar. Google intentionally circumvented the default privacy settings of Apple’s Safari browser, using a backdoor to set cookies on browsers set to reject them, in the latest privacy debacle for the search and advertising giant. 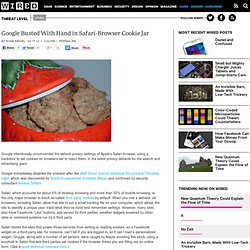 Google immediately disabled the practice after the Wall Street Journal disclosed the practice Thursday night, which was discovered by Stanford researcher Jonathan Mayer and confirmed by security consultant Ashkan Soltani. Safari, which accounts for about 6% of desktop browsing and more than 50% of mobile browsing, is the only major browser to block so-called third-party cookies by default. When you visit a website, all browsers, including Safari, allow that site to put a small tracking file on your computer, which allows the site to identify a unique user, track what they’ve done and remember settings. However, many sites also have Facebook “Like” buttons, ads served by third parties, weather widgets powered by other sites or comment systems run by a third party. Jerry - Articles About Big Data. Manage (and make cash with?) your data online. Personal lets users store data from multiple sites and then decide whom, if anyone, they want to share it with. 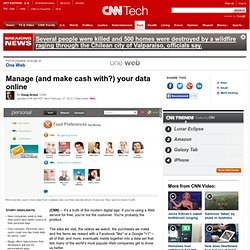 Issues Final Commission Report on Protecting Consumer Privacy. The Federal Trade Commission, the nation's chief privacy policy and enforcement agency, issued a final report setting forth best practices for businesses to protect the privacy of American consumers and give them greater control over the collection and use of their personal data. 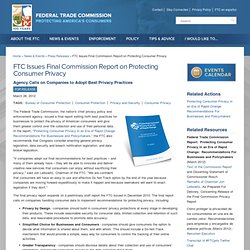 In the report, "Protecting Consumer Privacy in an Era of Rapid Change: Recommendations For Businesses and Policymakers," the FTC also recommends that Congress consider enacting general privacy legislation, data security and breach notification legislation, and data broker legislation. "If companies adopt our final recommendations for best practices – and many of them already have – they will be able to innovate and deliver creative new services that consumers can enjoy without sacrificing their privacy," said Jon Leibowitz, Chairman of the FTC.

The final privacy report expands on a preliminary staff report the FTC issued in December 2010. » Judge Napolitano: First Patriot To Shoot Down A Government Spy Drone Will Be A Hero Alex Jones. Blasts illegal use of “plastic drones” to spy on Americans in their backyards Steve Watson Infowars.com May 16, 2012 Judge Andrew Napolitano has warned Congress not to act “like potted plants” regarding the increased use of unmanned surveillance drones without warrants over US skies by military, government, and law enforcement agencies. 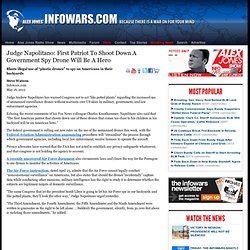 Echoing the recent comments of his Fox News colleague Charles Krauthammer, Napolitano also said that “The first American patriot that shoots down one of these drones that comes too close to his children in his backyard will be an American hero.” The federal government is rolling out new rules on the use of the unmanned drones this week, with the Federal Aviation Administration announcing procedures will “streamline” the process through which government agencies, including local law enforcement, receive licenses to operate the aircraft.

How open is your internet? An interactive map. Map: Where are the gun permits in your neighborhood? These maps indicate the locations of all pistol permit holders in Westchester and Rockland counties. 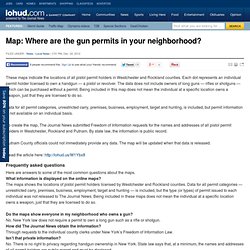 Each dot represents an individual permit holder licensed to own a handgun — a pistol or revolver. The data does not include owners of long guns — rifles or shotguns — which can be purchased without a permit. Being included in this map does not mean the individual at a specific location owns a weapon, just that they are licensed to do so. Latest in Web Tracking: Stealthy 'Supercookies' The Advertising Industry Has Quietly Launched One Of History's Biggest Efforts In Social Profiling - Business Insider.

Does the Internet empower consumers? 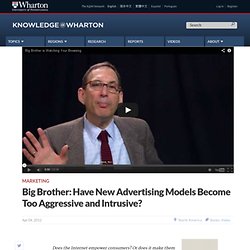 Dick Hardt dot org. Avi Rubin: All your devices can be hacked. The New Pay Phone and What It Knows About You. The term pay phone has a new meaning today. 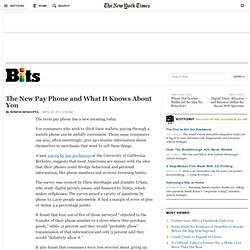 For consumers who wish to ditch their wallets, paying through a mobile phone can be awfully convenient. Massive Data Breach Strikes Visa, MasterCard, Others. Four giant card-payment processors and large U.S. banks that issue debit and credit cards were hit by a data-security breach after third-party services provider Global Payments Inc discovered its systems were compromised by unauthorized access. It was not immediately clear how many cardholders became victims of the breach, which affected MasterCard Inc, Visa Inc, American Express Co and Discover Financial Services, as well as banks and other franchises that issue cards bearing their logos. U.S. law enforcement authorities including the Secret Service are investigating and MasterCard said it has hired an independent data-security organization to review the incident. The CIA wants to spy on you through your TV: Agency director says net-connected gadgets will 'transform' surveillance. Devices connected to internet leak informationCIA director says these gadgets will 'transform clandestine tradecraft' Spies could watch thousands via supercomputersPeople 'bug' their own homes with web-connected devices By Rob Waugh Published: 13:20 GMT, 16 March 2012 | Updated: 13:55 GMT, 16 March 2012.

How Companies Learn Your Secrets. Big Data and the Stalker Economy. Retail Insight Blog. Did Target Go Too Far with Analytics? By Joe Skorupa The end game of predictive analytics in retail is to know shopper buying patterns before anyone else knows them. But does this include knowing personal details that are intimate and sensitive? Or, specifically, in the case of Target, does it mean knowing a teen is pregnant before the teen’s father knows? This is an extreme proof of concept, but the point is clear: advanced analytical tools in the hands of skilled executives can be incredibly powerful. Google deliberately stole information but executives 'covered it up' for years. Work of Street View cars to be examined over allegations Google used them to download personal detailsEmails, texts, photos and documents taken from wi-fi networks as cars photographed British roadsEngineer who designed software said a privacy lawyer should be consultedCalls for police and Information Commissioner to investigate new evidence.

Webcam Hacker Luis Mijangos: Newsmakers. Facebook, Google to Stand Trial in India. Cookie Law Solutions. Spectrum Crunch: The cell phone industry hits its limits - Feb. 21. This is part one of a week-long series on the cell phone capacity crunch. NEW YORK (CNNMoney) -- The U.S. mobile phone industry is running out of the airwaves necessary to provide voice, text and Internet services to its customers. Outlook: Monetizing mobile bandwidth. Mobile's Coming Costs Put CFOs on the Spot CIO. CFOworld — The iPad/iPhone-driven BYOD trend means demand for mobile bandwidth is expanding exponentially. That's interesting as a reflection of the boom in mobile devices across consumer and enterprise markets, but means problems for carriers. Blog Archive » Shopatron redefines Vendor Relationships. Is Procter & Gamble Losing Its Edge on the Competition?

Digital has been a hallmark of Procter & Gamble Chairman-CEO Bob McDonald's tenure, hailed as key to wringing $10 billion in overall costs and $1 billion in marketing savings out of its massive budgets in five years. But while P&G has gotten plenty of media play lately -- social and otherwise -- over its digital ambitions, it faces growing questions about how much good digital marketing can do amid broader signs P&G is losing its edge. Some analysts and competitors question whether P&G can digitize its way out of its deeper issues, or enjoy the same scale advantages in a digital world that it had in traditional marketing.

P&G is far from collapse. F-Commerce Trips as Gap to Penney Shut Facebook Stores: Retail. Brands Give Facebook F-Commerce an F. By Brian Solis On February 22, 2012. How Facebook Can Improve Upon Its 'F' Grade in F-Commerce. Infographic: A look into the future of Facebook 2012 - 2025. Understanding And Engaging The Digital Shopper - SymphonyIRI Group.

Brands struggling to follow consumer journey online, finds IAB. Why QR Codes Won't Last. Marketing Infographics. Clay Christensen's Milkshake Marketing. Amex Invests $100 Million In Its Future: Digital Ecosystem, Not The Plastic Card. The “Unhyped” New Areas in Internet and Mobile. Google’s Mobile Sales Head: US Smartphone Ownership Grew 7% Last Year — Plus, Predictions. Amazon Has Tried Everything to Make Shopping Easier. Except This. BloomReach Crunches Big Data To Deliver The Future Of SEO and SEM. The 5 Must-Reads on Enterprise Social within the Last Month. 5 Paradoxes Shaping the Future of Mobile Commerce. The Everything Project: Building A Google For The Mobile Web App Ecosystem.