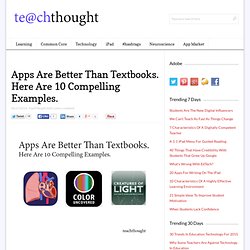 Here Are 10 Examples. We’ve theorized before that apps are the new textbook. That was back in 2012, and this hasn’t proven true for a variety of reasons. Not every classroom has tablets. Textbooks, while stagnant, are chock full of information and content. So while apps are seen as new school cool and books as dated, the latter persist, and probably aren’t going anywhere anytime soon. What we’ve tried to do in the following list is provide an evidentiary-based counterpoint to the lingering persistence of the textbook in education. Only one of these apps is a game; the rest are examples of how–when properly designed–content can be refracted digitally, with a user-centered touch interface, full multimedia capabilities, while still maintaining a focus on delivering content to students. Of course, it’s not really that simple. 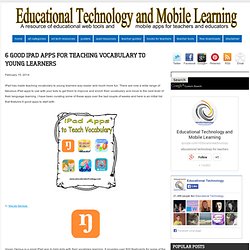 25 iPad Apps for Learning Spelling. February 5, 2014 While working on this list of iPad apps for learning spelling I came across over a hundred app which are all supposedly geared towards helping kids and young learners with their spelling but going through them I came out with only 25 and the rest was just a waste of time and effort. 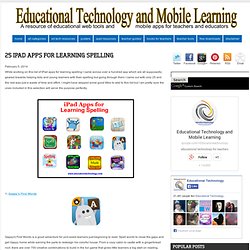 I might have skipped some good titles to add to this list but I am pretty sure the ones included in this selection will serve the purpose perfectly. 1- Gappy's First Words Gappy's First Words is a good adventure for pint-sized learners just beginning to read. Spell words to close the gaps and get Gappy home while earning the parts to redesign his colorful house. From a cozy cabin to castle with a gingerbread roof, there are over 700 creative combinations to build in the fun game that gives little learners a big start on reading. iPad Picture Dictionaries. Picture Dictionaries are useful in a number of different educational situations. 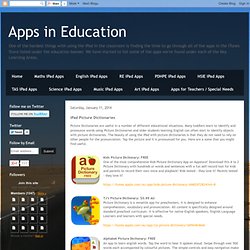 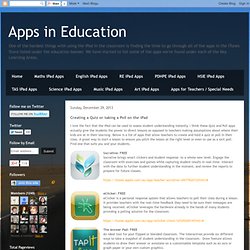 I think these Quiz and Poll apps actually give the students the power to direct lessons as opposed to teachers making assumptions about where their kids are at in their learning. Below is a list of apps that allow teachers to create and hold a quiz or poll in their class. A great way to start a lesson to ensure you pitch the lesson at the right level or even to use as a exit poll. 7 Wonderful iPad Apps to Learn about Human Body in 3D. Technology has radically revolutionized the human science and provided us with profound insights that were not knowable to us before. 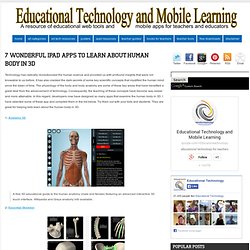 It has also cracked the dark secrets of some key scientific concepts that mystified the human mind since the dawn of time. The physiology of the body and body anatomy are some of these key areas that have benefited a great deal from the advancement of technology. Consequently, the teaching of these concepts have become way easier and more attainable. In this regard, developers now have designed so many apps that examine the human body in 3D. 55 Free iPad Apps for Practicing Reading. Special Needs iPad Resources. 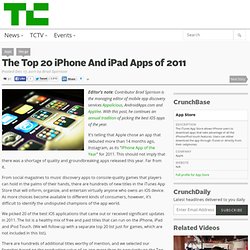 With this post, he continues an annual tradition of picking the best iOS apps of the year. It’s telling that Apple chose an app that debuted more than 14 months ago, Instagram, as its “iPhone App of the Year” for 2011. This should not imply that there was a shortage of quality and groundbreaking apps released this year. Far from it. From social magazines to music discovery apps to console-quality games that players can hold in the palms of their hands, there are hundreds of new titles in the iTunes App Store that will inform, organize, and entertain virtually anyone who owns an iOS device.

We picked 20 of the best iOS applications that came out or received significant updates in 2011. Here are ours. 1. After launching exclusively on iPads last year, this pioneering social magazine expanded to all iOS devices in December. 2. Top 5 iPhone Apps and Accessories. This website would like to remind you: Your browser (Firefox 17) is out of date. 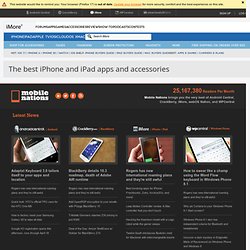 Update your browser for more security, comfort and the best experience on this site. Skip to main content. Pack for iPhone: Our List of the Best iPhone Apps. AppShopper, Luxylight, Zite, Verbs, Prompt, Yelp (until iOS6), Groupon, OpenTable, Cineplex, and SoundHound Infinity And for the built in apps: Messages, Notes, Camera, Reminders, Clock, and Calculator I recommend using Viggle. 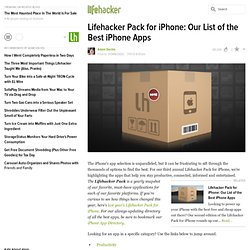 Its a reward program app that you gain rewards for watching TV. Best Apps for Kids : reviews, news and promo codes for iPhone / iPad / iPod apps. Surprisingly Educational Apps. BrainPop Featured Movie is No. 1 on the Editor's Top 15! (FREE app!) It's taken much longer than I anticipated, but we've finally come to the end of the Editor's Top 15 countdown. 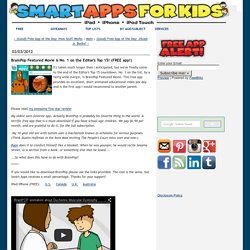 No. 1 on the list, by a fairly wide margin, is BrainPop Featured Movie. This free app provides an excellent, short animated educational video per day and is the first app I would recommend to another parent. iPad. 30 Examples of Stunning iPad App Interface Design. The iPhone ushered in an era of beautiful interface design unlike anything we’d ever seen on a mobile device. This trend is now being revived and pushed further than ever on the iPad’s larger screen and the results are amazing. Best iPad Apps. Using iPads to Support Literacy Instruction in the Classroom. A directory of educational apps that can be used in the classroom. 1,000 Education Apps Organized By Subject & Price.

How Students Benefit From Using Social Media 13.56K Views 0 Likes A lot of criticism has been leveled at social media and the effect it has on the way students process and retain information, as well as how distracting it can be. However, social media offers plenty of opportunities for learning and interactivity, and if you take a moment to think about it, it's not too hard to see how students benefit from using social media. 10 African-American History Month Teaching Resources 1.27K Views 0 Likes This week’s Featured Ten Learnist boards are dedicated to African-American history month. 3 Tech Tips Your Grandma Could Teach You. APPitic - 1,300+ EDUapps.

40 Amazingly Educational iPad Apps for Kids. Adults are obsessed with the new iPad, but have you ever thought about sharing your new toy with your kids? Just like online education games provide kids with fun outlets for learning, iPad apps help your kids review basic skills, improve critical thinking and decision-making skills, and even learn to read. The Top 50 Apps for Kids: Our favorite picks for education, music, art, and more!

Whether you're an iPhone mom, an iPad dad, or an Apple-agnostic type who prefers Google's Android operating system, your kids just know you as the one who buys the apps. However, with more than 1 million tablet and smartphone apps available across Apple's iTunes Store and the Google Play market, where do you even start to find the best ones for your kids? For Babble's annual roundup of the 50 best apps for kids, we looked at some basic criteria that you and your family might also consider before downloading an app.

Every app we tested had to have received an age-appropriate rating ("4+" in Apple's case; "Everyone" in Google's). We also considered whether the app allowed parents to participate in, or at least oversee, whatever their kids were doing onscreen. In addition, even if the apps were designed to do nothing more than keep kids busy while you're in line at the store, there had to be some positive or educational element to them. 50 Must-Download Apps For Lifelong Learners. Added by Jeff Dunn on 2012-08-13 Long after degrees have been conferred and careers have been launched, many folks just can’t seem to quit school. For them, life provides an overstuffed cornucopia of educational opportunities that don’t necessarily require hefty loans and navigating different professorial strategies.

Those with a lust for learning who happen to also enjoy testing the limits of what the iPad offers definitely don’t have to worry about finding resources to pique their fancy. Hundreds, if not thousands, of apps are out there just twitching for users to fire them up and absorb a mental nugget or two. History and Geography. Top 12 apps. 8 of the BEST Apps to Add to Your New iPad! 30 Cool Educational iPad Apps for Science Lovers - Creative Can Creative Can. If you are a student, a teacher, a parent or just a science enthusiast, you can now expand your knowledge about science in a somewhat enjoyable and convenient method using your iPad.

The Top 100 Apps for Kids: 1-10. Here are the Top 10! I've noticed that the top of the Top 100 Free Apps for Kids list gets tons of clicks, but the bottom not so much. (Understandably, it's a long list.) So, when updating the list from now on, I'm going to reveal them 10 at a time counting up so that none of the free apptastic fun is missed. Remember, the list is determined by reader clicks, so it will get better with your help. 1) LEGO App 4+ (build a vehicle and then use it in activities) 2012 Apps for Teachers. Another 10 Great Apps for Teachers. The Top Educational iPad Apps Every Teacher and Student should Know about ( 100+)

Maths Apps. Literacy apps. 50 Must-Have Educational Apps. It’s time for holiday road trips and you know what that means: driving, flying, cranky kids, and… teaching opportunities! What’s that, you say? App Gems: Honorable mentions. It isn’t that hard to come up with a list of App Gems winners.

The difficult part is keeping that list down to a manageable length. When Macworld editors first meet to discuss our awards for great iOS apps, the number of nominees runs in the triple digits. The Very First App You Should Load on Your New iPad. 10 Best iPad PDF Readers. We’ve taken the time to list out the best iPad PDF readers, even though the Apple tablet already has a native application, simply because it’s worth a look to go beyond the standard and into the unknown. Also, it won’t hurt to have a multipurpose app that lets you not only view all your PDF documents, but also annotate them with sticky notes or highlight important points on the device itself. Best iPad Apps. Apps to Use as Student ePortfolios.

Special Needs Apps. Education - Apps. Apps for Grading Assessments. iPad and games for learning. Quixey - Find apps that do what you want. These are a few of my favorite apps! My Pinterest iPad boards.