Katalon is a complete, easy-to-use, and scalable automation platform for continuous testing.

Strategy to Select the Automation Testing Tool. Depending on your projects and your QA team’s nature, your choice of automation testing tool must be compatible with many different aspects, such as project scope and requirements, in addition to its reputation. 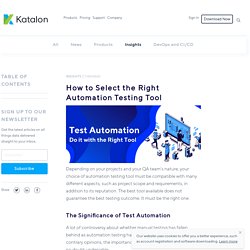 The best tool available does not guarantee the best testing outcome. It must be the right one. The Significance of Test Automation A lot of controversy about whether manual testing has fallen behind as automation testing has risen in popularity. Regardless of contrary opinions, the importance of test automation nowadays is no doubt undeniable. The software market now demands “Quality at Speed” from industry players. Test types that require repetitive actions, like regression testing, are what needed to be automated the most. You can dig a bit deeper into test automation with this complete introduction of automation testing. AI Powered Efficiency - Katalon Offers Native Integration with Applitools. Introduction If you write software for a living, you probably have a bias toward coded tests and against all things codeless. 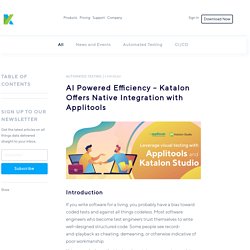 Most software engineers who become test engineers trust themselves to write well-designed structured code. Some people see record-and-playback as cheating, demeaning, or otherwise indicative of poor workmanship. Yet, research shows that test code maintenance costs correlate directly to the number of lines of written test code. Every line of test code may evolve into a liability on a continually-evolving product. Applitools, a leader in Visual Testing via Visual AI, virtually eliminates the dependency on locators for test validation – and dozens of lines of validation code in the process. Eliminate Object Locator Flakiness with Self-healing. In Web UI testing, testers have to deal with increasing new page objects and changing identifiers when the web application grows. 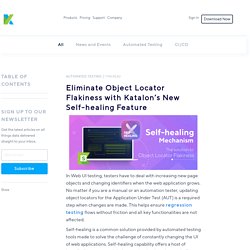 No matter if you are a manual or an automation tester, updating object locators for the Application Under Test (AUT) is a required step when changes are made. This helps ensure regression testing flows without friction and all key functionalities are not affected. Self-healing is a common solution provided by automated testing tools made to solve the challenge of constantly changing the UI of web applications.

Self-healing capability offers a host of benefits for testers and their team: it takes less time and effort to ensure all the functional tests run smoothly and avoids interruption for all executions. Top Software Testing Trends to Watch Out For in 2020. The software testing landscape continues to evolve. 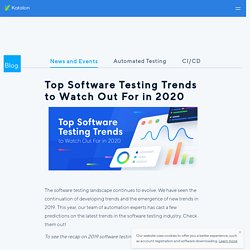 We have seen the continuation of developing trends and the emergence of new trends in 2019. This year, our team of automation experts has cast a few predictions on the latest trends in the software testing industry. Software Testing Trends 2019 Recap. 2019 is almost over. 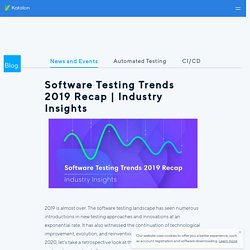 The software testing landscape has seen numerous introductions in new testing approaches and innovations at an exponential rate. It has also witnessed the continuation of technological improvement, evolution, and reinvention. As we are progressing to 2020, let’s take a retrospective look at the top trends in test automation and see how we stand after one year. Our team at Katalon has reflected on the most popular trends that took place in the software testing industry over the course of one year.

Katalon Smart Wait: A New Way to Handle Web Loading Issues. For those who are familiar with Selenium WebDriver, one of the most common features is the Wait command. 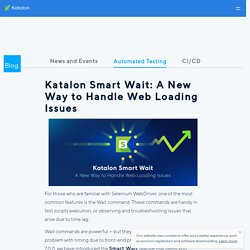 These commands are handy in test scripts execution, or observing and troubleshooting issues that arise due to time lag. Wait commands are powerful — but they also come along with a big problem with timing due to front-end processing. Starting from version 7.0.0, we have introduced the Smart Wait feature that helps you handle Selenium wait issues without any additional test scripts. 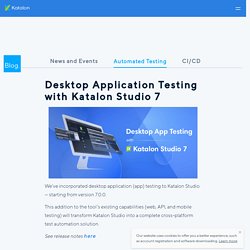 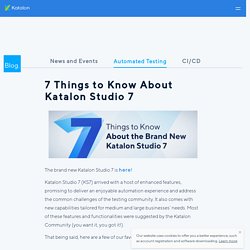 Katalon Studio 7 (KS7) arrived with a host of enhanced features, promising to deliver an enjoyable automation experience and address the common challenges of the testing community. It also comes with new capabilities tailored for medium and large businesses’ needs. Most of these features and functionalities were suggested by the Katalon Community (you want it, you got it!).

That being said, here are a few of our favorite things in KS7! Best 14 CI/CD Tools You Must Know. “Quality at Speed” is the new norm in software development. 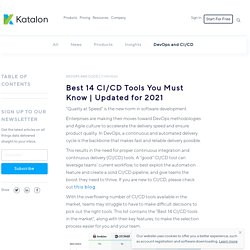 Enterprises are making their moves toward DevOps methodologies and Agile culture to accelerate the delivery speed and ensure product quality. In DevOps, a continuous and automated delivery cycle is the backbone that makes fast and reliable delivery possible. CI/CD Pipeline: What, Why & How to Build The Best One. On this page: To gain full potential of the software development workflow, developers today must familiarize themselves with the best workflows, practices, and tools. 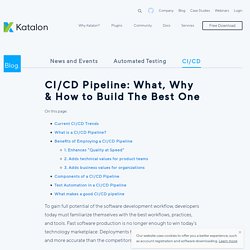 Fast software production is no longer enough to win today’s technology marketplace. Continuous Delivery vs. Continuous Deployment: Where to draw the line? You’ve likely heard of the term CI/CD pipeline. You have probably known about these practices: continuous integration, continuous delivery, and continuous deployment as well. What is Regression Testing? Definition, Tools & How to Get Started. What is regression testing?

Regression testing is a software testing practice that ensures an application still functions as expected after any code changes, updates, or improvements. Regression testing is responsible for the overall stability and functionality of the existing features. Whenever a new modification is added to the code, regression testing is applied to guarantee that after each update, the system stays sustainable under continuous improvements. Changes in the code may involve dependencies, defects, or malfunctions. Regression testing targets to mitigate these risks, so that the previously developed and tested code remains operational after new changes. Generally, an application goes through multiple tests before the changes are integrated into the main development branch. Research Done For You (2019 Updated) The third wave of test automation brings about more concepts in software delivery – one of which is ‘continuous testing.’

However, mastering continuous testing is difficult; choosing the right continuous testing tool is even more overwhelming. Using the right tool is incredibly beneficial to your software testing and delivery success. We compiled a list of 10 most popular continuous testing tools (ranked in no particular order) that are currently in the market. Under each tool, we analyzed the features and possible drawbacks based on certain criteria, including types of supported test, learning curve, used programming language, continuous testing support, CI/CD ecosystem support, breakthrough features, and so on. 1. Top 30+ DevOps Interview Questions. Total DevOps Interview Questions & Answers DevOps – a renowned software development practice that many companies adopt into their workflow – has been drawing a great deal of attention.

More and more companies have adopted this practice, including large enterprises such as Netflix, Facebook, or Amazon. As a matter of fact, DevOps-related job has become one of the most promising career choices for IT professionals. You might be among the developers who are planning to advance their career as a DevOps engineer, analyst, or specialist. Besides the required technical skills, a DevOps job interview can be a tough challenge without diligent preparation. Best Strategies to Implement for Your Team. In today’s rapidly changing world, software products need to be upgraded frequently and quickly to bring value to customers and users. Software features are continuously developed, tested, deployed, and operated in the production environment.

New features are not only developed and tested successfully, but they also deployed and operated without much chaos and disruption. Software cross-functional teams which include product owners, software development, quality assurance (QA), operations need to work together to ensure the fast flow of work from development to operation. This requires development teams to be more productive in delivering quality work while QA, operations, and other teams need to use automated tools and follow well-formed practices to minimize their dependence on other teams. DevOps has been a process that organizations seek to achieve this goal. Organizational change A transformation in DevOps must begin within. What to Consider Before Applying CI/CD. What are Microservices? A Complete Introduction for Beginners. Microservices are a type of architectural style for building software that has been gaining popularity.

The concept was first introduced at a tech conference in 2011 and has been adopted by many Agile enterprises such as Netflix, Amazon, Uber, SoundCloud, Groupon, eBay, to name a few. Top 10 Benefits of Continuous Integration & Continuous Delivery. Apply Shift-Left Testing Approach to Continuous Testing.

As the demand to release quality software products in the short amount of time continues to accelerate, Agile and DevOps teams have to adopt new approaches to avoid falling behind. What is End-to-End (E2E) Testing? 8 Best Practices to Implement Continuous Testing. Research Done For You (2019 Updated) What is CI/CD? Continuous Integration & Continuous Delivery in 2019.

Related:  Journey through Psychopath / Narcissist abuse.   -  Oracle   -  Top Software Testing Trends to Watch Out For in 2020   -  Software Testing Trends 2019 Recap   -  Katalon Smart Wait: A New Way to Handle Web Loading Issues   -  Desktop Application Testing with Katalon Studio 7   -  7 Things to Know About the Brand New Katalon Studio 7   -  Best 14 CI/CD Tools You Must Know   -  CI/CD Pipeline: What, Why & How to Build The Best One   -  Continuous Delivery vs. Continuous Deployment: Where to draw the line?   -  What is Regression Testing? Definition, Tools & How to Get Started   -  Research Done For You (2019 Updated)   -  Top 30+ DevOps Interview Questions   -  Best Strategies to Implement for Your Team   -  What to Consider Before Applying CI/CD   -  What are Microservices? A Complete Introduction for Beginners   -  Top 10 Benefits of Continuous Integration & Continuous Delivery   -  Apply Shift-Left Testing Approach to Continuous Testing   -  What is End-to-End (E2E) Testing?   -  8 Best Practices to Implement Continuous Testing   -  What is CI/CD? Continuous Integration & Continuous Delivery in 2019   -  Education   -  Enterprise