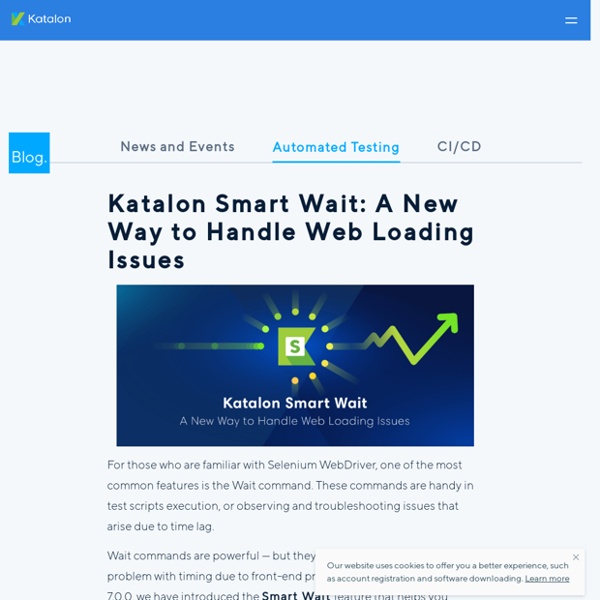 For those who are familiar with Selenium WebDriver, one of the most common features is the Wait command. These commands are handy in test scripts execution, or observing and troubleshooting issues that arise due to time lag. Wait commands are powerful — but they also come along with a big problem with timing due to front-end processing. Starting from version 7.0.0, we have introduced the Smart Wait feature that helps you handle Selenium wait issues without any additional test scripts. The #1 Selenium’s Villain: Timing Issue Most web applications today are developed using front-end technologies such as Javascript or Ajax. This is not an issue to manual testing, but a huge problem to automated testing since no one is there to tell the machine when it should take actions. There are several solutions to problems in Selenium wait — but they don’t seem to go directly to the point. However, these solutions come with risks and uncertainties. Thus, the solution itself becomes a new timing issue.

7 Things to Know About the Brand New Katalon Studio 7 The brand new Katalon Studio 7 is here! Katalon Studio 7 (KS7) arrived with a host of enhanced features, promising to deliver an enjoyable automation experience and address the common challenges of the testing community. It also comes with new capabilities tailored for medium and large businesses’ needs. Top Software Testing Trends to Watch Out For in 2020 The software testing landscape continues to evolve. We have seen the continuation of developing trends and the emergence of new trends in 2019. This year, our team of automation experts has cast a few predictions on the latest trends in the software testing industry. Check them out!

Best 14 CI/CD Tools You Must Know “Quality at Speed” is the new norm in software development. Enterprises are making their moves toward DevOps methodologies and Agile culture to accelerate the delivery speed and ensure product quality. In DevOps, a continuous and automated delivery cycle is the backbone that makes fast and reliable delivery possible.

CI/CD Pipeline: What, Why & How to Build The Best One On this page: To gain full potential of the software development workflow, developers today must familiarize themselves with the best workflows, practices, and tools. Fast software production is no longer enough to win today’s technology marketplace. Deployments have to be faster, more reliable, and more accurate than the competitors. Continuous Delivery vs. Continuous Deployment: Where to draw the line? You’ve likely heard of the term CI/CD pipeline. You have probably known about these practices: continuous integration, continuous delivery, and continuous deployment as well. But the uncertainty remains: What are the differences between continuous delivery and continuous deployment? What is Regression Testing? Definition, Tools & How to Get Started What is regression testing? Regression testing is a software testing practice that ensures an application still functions as expected after any code changes, updates, or improvements. Regression testing is responsible for the overall stability and functionality of the existing features. Whenever a new modification is added to the code, regression testing is applied to guarantee that after each update, the system stays sustainable under continuous improvements. Changes in the code may involve dependencies, defects, or malfunctions. Regression testing targets to mitigate these risks, so that the previously developed and tested code remains operational after new changes.

Top 30+ DevOps Interview Questions Total DevOps Interview Questions & Answers DevOps – a renowned software development practice that many companies adopt into their workflow – has been drawing a great deal of attention. More and more companies have adopted this practice, including large enterprises such as Netflix, Facebook, or Amazon. As a matter of fact, DevOps-related job has become one of the most promising career choices for IT professionals. Best Strategies to Implement for Your Team In today’s rapidly changing world, software products need to be upgraded frequently and quickly to bring value to customers and users. Software features are continuously developed, tested, deployed, and operated in the production environment. New features are not only developed and tested successfully, but they also deployed and operated without much chaos and disruption. Software cross-functional teams which include product owners, software development, quality assurance (QA), operations need to work together to ensure the fast flow of work from development to operation. This requires development teams to be more productive in delivering quality work while QA, operations, and other teams need to use automated tools and follow well-formed practices to minimize their dependence on other teams. DevOps has been a process that organizations seek to achieve this goal.

What to Consider Before Applying CI/CD Continuous integration and continuous delivery (CI/CD) is a complex part of any development cycle. It involves continuously integrating code into a shared repository to keep code progression amongst a team of developers running smooth and steady. This helps prevent merging errors, duplicated efforts and promoting collaboration to create a better product. That code is then thoroughly and continuously tested to keep problems from arising. From there, the code is then deployed to production to be continuously delivered to the live environment.

What are Microservices? A Complete Introduction for Beginners Microservices are a type of architectural style for building software that has been gaining popularity. The concept was first introduced at a tech conference in 2011 and has been adopted by many Agile enterprises such as Netflix, Amazon, Uber, SoundCloud, Groupon, eBay, to name a few. So, what are microservices? What are the benefits of microservices?