Cognitive Impairment in Aging: 10 Causes & What the Doctor Should Check. Assessing Cognitive Impairment in Older Patients. As a primary care practice, you and your staff are often the first to address a patient’s complaints — or a family’s concerns — about memory loss or possible dementia.(1,2) This quick guide provides information about assessing cognitive impairment in older adults. 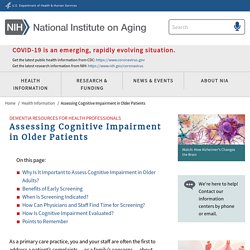 With this information, you can identify emerging cognitive deficits and possible causes, following up with treatment for what may be a reversible health condition. Or, if Alzheimer’s disease or another dementia is suspected, you can help patients and their caregivers prepare for the future. Brief, nonproprietary risk assessment and screening tools are available.(2) Why Is It Important to Assess Cognitive Impairment in Older Adults?

Cognitive impairment in older adults has a variety of possible causes, including medication side effects, metabolic and/or endocrine derangements, delirium due to intercurrent illness, depression and dementia, with Alzheimer’s dementia being most common. When Is Screening Indicated? The U.S. References. Mild Cognitive Impairment (MCI) Mild cognitive impairment (MCI) causes a slight but noticeable and measurable decline in cognitive abilities, including memory and thinking skills. 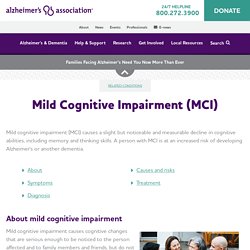 A person with MCI is at an increased risk of developing Alzheimer's or another dementia. About mild cognitive impairment Mild cognitive impairment causes cognitive changes that are serious enough to be noticed to the person affected and to family members and friends, but do not affect the individual’s ability to carry out everyday activities. Approximately 15% to 20% of people age 65 or older have MCI. People living with MCI, especially MCI involving memory problems, are more likely to develop Alzheimer’s disease or other dementias than people without MCI. Learn more: Types of Dementia, What Is Alzheimer's? Symptoms Experts classify mild cognitive impairment based on the thinking skills affected: Amnestic MCI: MCI that primarily affects memory. Diagnosis A medical workup for MCI includes the following core elements: 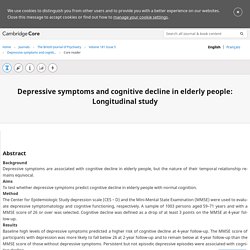 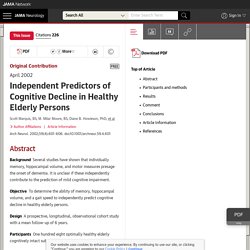 It is unclear if these independently contribute to the prediction of mild cognitive impairment. Objective To determine the ability of memory, hippocampal volume, and a gait speed to independently predict cognitive decline in healthy elderly persons. Design A prospective, longitudinal, observational cohort study with a mean follow-up of 6 years. Participants One hundred eight optimally healthy elderly cognitively intact subjects. 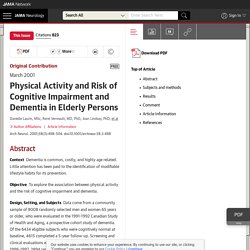 Little attention has been paid to the identification of modifiable lifestyle habits for its prevention. Objective To explore the association between physical activity and the risk of cognitive impairment and dementia. Design, Setting, and Subjects Data come from a community sample of 9008 randomly selected men and women 65 years or older, who were evaluated in the 1991-1992 Canadian Study of Health and Aging, a prospective cohort study of dementia. Of the 6434 eligible subjects who were cognitively normal at baseline, 4615 completed a 5-year follow-up.

Screening and clinical evaluations were done at both waves of the study. Symptoms of mental impairment among elderly adults and their effects on Family caregivers. Exploring Interventions to Reduce Cognitive Decline in Aging. Eight Habits That Improve Cognitive Function. 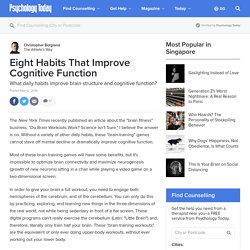 Science Isn’t Sure. " I believe the answer is no. Without a variety of other daily habits, these "brain-training" games cannot stave off mental decline or dramatically improve cognitive function. Most of these brain-training games will have some benefits, but it's impossible to optimize brain connectivity and maximize neurogenesis (growth of new neurons) sitting in a chair while playing a video game on a two-dimensional screen.

In order to give your brain a full workout, you need to engage both hemispheres of the cerebrum, and of the cerebellum. Article continues after advertisement Although the cerebellum constitutes only 10 percent of the brain by volume, it houses over 50 percent of the brain's total neurons. Brain-Training Games Increase Sedentary Screen Time I slightly disagree. 1. 2. 3. 4. 5. 6. 7. "Sleep is not just a waste of time," Yuka Sasaki concludes. 8. 10 Strategies to Fight Brain Aging. Cognitive Training for Older Adults Nov 14. Physical activity to improve cognition in older adults: can physical activity programs enriched with cognitive challenges enhance the effects? A systematic review and meta-analysis. Cognition and Healthy Brain Aging Video – Brigham and Women’s Hospital.