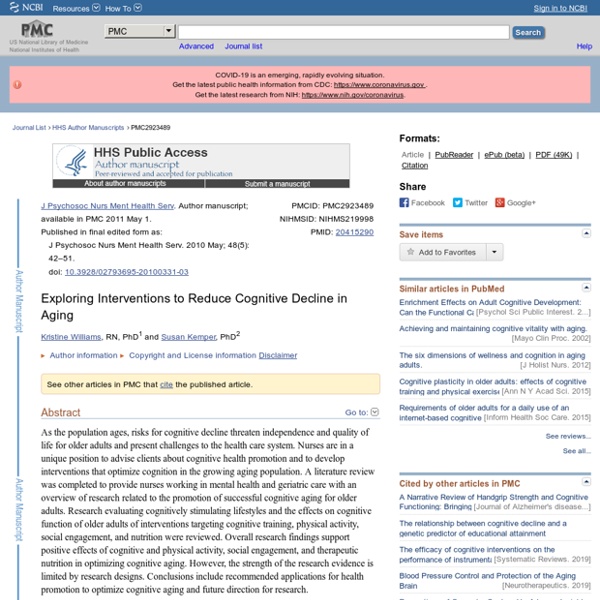 Eight Habits That Improve Cognitive Function The New York Times recently published an article about the "brain fitness" business, "Do Brain Workouts Work? Science Isn’t Sure." I believe the answer is no. Without a variety of other daily habits, these "brain-training" games cannot stave off mental decline or dramatically improve cognitive function. Most of these brain-training games will have some benefits, but it's impossible to optimize brain connectivity and maximize neurogenesis (growth of new neurons) sitting in a chair while playing a video game on a two-dimensional screen.

6 simple steps to keep your mind sharp at any age Everyone has the occasional "senior moment." Maybe you've gone into the kitchen and can't remember why or can't recall a familiar name during a conversation. Memory lapses can occur at any age, but aging alone is generally not a cause of cognitive decline. When significant memory loss occurs among older people, it is generally not due to aging but to organic disorders, brain injury, or neurological illness. Cognitive Health and Older Adults Cognitive health—the ability to clearly think, learn, and remember—is an important component of brain health. Others include: Motor function—how well you make and control movements Emotional function—how well you interpret and respond to emotions Sensory function—how well you feel and respond to sensations of touch, including pressure, pain, and temperature This guide focuses on cognitive health and what you can do to help maintain it.

Physical Activity and Risk of Cognitive Impairment and Dementia in Elderly Persons Context Dementia is common, costly, and highly age related. Little attention has been paid to the identification of modifiable lifestyle habits for its prevention. Objective To explore the association between physical activity and the risk of cognitive impairment and dementia.

How memory and thinking ability change with age Scientists used to think that brain connections developed at a rapid pace in the first few years of life, until you reached your mental peak in your early 20s. Your cognitive abilities would level off at around middle age, and then start to gradually decline. We now know this is not true. Instead, scientists now see the brain as continuously changing and developing across the entire life span. What are Cognitive Skills and Abilities? By: Dr. Pascale Michelon What is cog­ni­tion?

Independent Predictors of Cognitive Decline in Healthy Elderly Persons Background Several studies have shown that individually memory, hippocampal volume, and motor measures presage the onset of dementia. It is unclear if these independently contribute to the prediction of mild cognitive impairment. Objective To determine the ability of memory, hippocampal volume, and a gait speed to independently predict cognitive decline in healthy elderly persons.

Attention Deficit Can Come with Old Age Source: Are you old enough that this sounds familiar? Actually, memory problems like these affect most people at some time, but getting older can make such forgetting worse. These memory problems happen because you lose attention and get distracted. As you get older, it is easier to get distracted. It is as if we get "attention deficit disorder (ADD)" as we age.