REVEAL: Leaving the International Churches of Christ (ICC, ICOC, ICoC) and International Christian Church (ICC)/Sold-Out Discipling Movement. Christian Radio - Free Online Christian Ministry Radio Broadcasts. Prophetic Dream: Marco Rubio - Behold the Man Ministries. The Nile And The Euphrates Are Drying Up: Both Rivers Are In The News And Both Rivers Are In The Bible (An Inevitable Famine Is Plaguing The Muslim World) By Walid Shoebat Egyptian President Abdel Fattah al-Sisi signed agreement on the Grand Ethiopian Renaissance Dam will be a burden on Egypt. 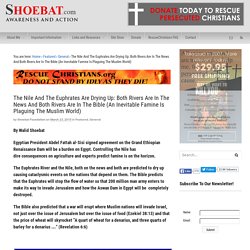 A Prophetic Vision of the Elections to Come. "Arise and awaken church for the future of your nation rests within your hands! 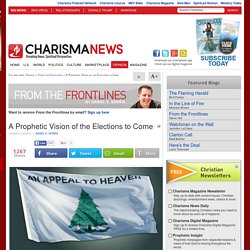 " Those were the words I heard in my spirit as I prayed this morning. At the same time I saw a large, brass balance scale and I heard, "Can you not weigh out truth and judge what is righteous? Let the remnant arise for their voice is needed in this very hour. " How presidents pray: The prayer breakfast from Eisenhower to Obama. WASHINGTON — For 63 years, presidents have spent the morning of the first Thursday in February gathering with members of Congress and evangelical Christians for the National Prayer Breakfast. 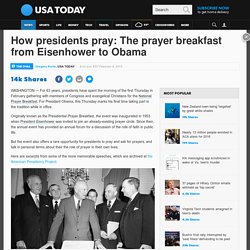 For President Obama, this Thursday marks his final time taking part in the tradition while in office. Originally known as the Presidential Prayer Breakfast, the event was inaugurated in 1953 when President Eisenhower was invited to join an already-existing prayer circle. Since then, the annual event has provided an annual forum for a discussion of the role of faith in public life. But the event also offers a rare opportunity for presidents to pray and ask for prayers, and talk in personal terms about their the role of prayer in their own lives.

Here are excerpts from some of the more memorable speeches, which are archived at the American Presidency Project: Are We Headed For A Crash? Reflections On The Current State of Evangelical Worship – Worthily Magnify. Last week I spent a couple of days attending the National Worship Leader Conference, hosted by Worship Leader Magazine, featuring many well-known speakers and worship leaders. 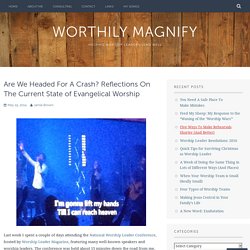 The conference was held about 15 minutes down the road from me, so it was an opportunity I couldn’t pass up. Facts About Abortion: U.S. Abortion Statistics. Primary, nationwide abortion statistics for the United States are available from two sources—privately from the Guttmacher Institute (AGI) and publicly from the Centers for Disease Control (CDC). 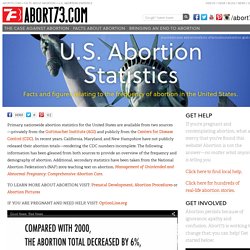 In recent years, California, Maryland, and New Hampshire have not publicly released their abortion totals—rendering the CDC numbers incomplete. The following information has been gleaned from both sources to provide an overview of the frequency and demography of abortion. Additional, secondary statistics have been taken from the National Abortion Federation's (NAF) 2009 teaching text on abortion, Management of Unintended and Abnormal Pregnancy: Comprehensive Abortion Care. TO LEARN MORE ABOUT ABORTION, VISIT: Prenatal Development, Abortion Procedures or Abortion Pictures IF YOU ARE PREGNANT AND NEED HELP, VISIT: OptionLine.org. Facts About Abortion: U.S. Abortion Statistics. Missing U.S. Missile Shows Up in Cuba.

Obama announces gun actions in emotional plea for congressional action. President Obama announced a series of executive actions on guns, and shed tears as he remembered the victims of gun violence. 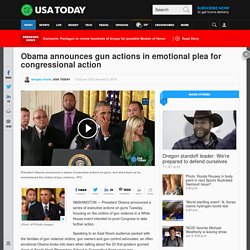 VPC WASHINGTON — President Obama announced a series of executive actions on guns Tuesday, focusing on the victims of gun violence in a White House event intended to prod Congress to take further action. Speaking to an East Room audience packed with the families of gun violence victims, gun owners and gun control advocates, an often emotional Obama broke into tears when talking about the 20 first-graders gunned down at Sandy Hook Elementary School in Connecticut three years ago. "First graders," he said, pausing to wipe away tears and compose himself. To the White Parents of my Black Son’s Friends. I’ve been wrestling with talking to you about some things I think you need to know. 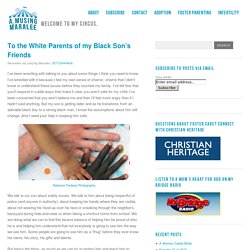 I’ve wrestled with it because I feel my own sense of shame– shame that I didn’t know or understand these issues before they touched my family. I’ve felt fear that you’ll respond in subtle ways that make it clear you aren’t safe for my child. I’ve been concerned that you won’t believe me and then I’ll feel more angry than if I hadn’t said anything. 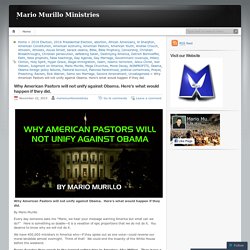 Here’s what would happen if they did. By Mario Murillo Every day someone asks me “Mario, we hear your message warning America but what can we do?” YEAR IN REVIEW: Why the Gay Agenda Is Attacking Ex-Homosexual Donnie McClurkin. Join us on our podcast each weekday for an interesting story, well told, from Charisma News.

Listen at charismapodcastnetwork.com. Editor's Note: 2015 was a big year in the church—and in the world. This week we're looking at some of the biggest stories of the year, selected based on feedback from our readers. Thanks for reading Charisma News this year and stay tuned as we continue expanding our coverage in 2016 to include more spiritual insights on the stories that matter most to you. 21 Surprising Statistics That Reveal How Much Stuff We Actually Own. Do Muslims and Christians Worship the Same God? Posted by Nabeel Qureshi on December 22, 2015 The Wheaton Controversy On December 15, 2015, Wheaton College, a flagship of evangelical educational institutions, placed one of its professors on administrative leave for “theological statements that seemed inconsistent with [their] doctrinal convictions.” 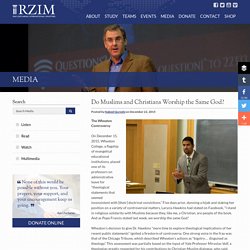 Five days prior, donning a hijab and staking her position on a variety of controversial matters, Larycia Hawkins had stated on Facebook, “I stand in religious solidarity with Muslims because they, like me, a Christian, are people of the book. And as Pope Francis stated last week, we worship the same God.” ‘Fairy tale’: Many pastors don’t believe Jesus born of virgin. Text smaller Text bigger A live Nativity scene at the Redeemer Lutheran Church in Stuart, Florida. (WND photo / Joe Kovacs) More people might come to church if Christians would drop “fairy tale” tidbits like the Nativity story. We Already Have a Viable Third Party - Michael Brown - Page full. According to the latest polls, only one percent of voters will cast their ballot for a third party candidate, which means that all the talk of a protest vote against the two main parties will amount to little or nothing.

Yet there is already a viable third party in America. It simply needs to awaken to its calling. Dr. Martin Luther King spoke of this “third party” as well – although not in those terms – saying that it “must be reminded that it is not the master or the servant of the state, but rather the conscience of the state.” Why The Pulpit Must Be Political — Michael C Sherrard. This time of year, my church doesn’t need a “5 Ways to Make Jesus the Reason for the Season” type of sermon. We are not in a time of peace. We cannot keep drinking our spiced eggnog pretending that all is well in the world. While we deck the halls with boughs of holly, there is a mob that has set fire to boughs of their own, and they are marching toward us.

Now, of course it is right to celebrate. I’m not saying otherwise. Trump rips ‘desperate’ Jeb’s nominee threat. Text smaller Text bigger Donald Trump and Jeb Bush. Here’s What That Post About Taking a Train Across the USA for $213 Doesn’t Tell You. 2016 election: Ben Carson blasts RNC, threatens to leave Republican Party. Ben Carson on Friday blasted the Republican National Committee following a Washington Post report that nearly two-dozen establishment party figures were prepping for a potential brokered convention as Donald Trump continues to lead most polls. RNC Chairman Reince Priebus held a dinner in Washington, D.C., on Monday, and, according to five people who spoke with the Post, the possibility of Trump heading into the Cleveland convention with a substantial number of delegates was a topic of discussion. Some attendees suggested the establishment lay the groundwork for a floor fight that could lead the party’s mainstream wing to unite behind an alternative.

6 Reasons Many Pastors Aren't Addressing Hot Button Issues From the Pulpit. How ISIS Makes Radicals. France shuts down three mosques in state of emergency crackdown. Pakistan Christian Post. The article by Mr. Jeffrey Imm who leads a volunteer group R.E.A.L based in Washington DC wrote in “San Bernardino, California Attack and Al Huda” clearly linked Tashfeen Malik with Al-Huda which was confirmed by intelligence sources in Pakistan today and turned breaking news by media. A Guide to Mass Shootings in America. A Guide to Mass Shootings in America. Why Have There Been More Mass Shootings Under Obama than the Four Previous Presidents Combined? Leaving the Faith Because of the Faithful  A study by the Pew Research Center recently found that no religion has as many defectors as Christianity. By 2050, an estimated 66 million people who define themselves as Christian are expected to leave the faith. 5 Indicators of an Evil and Wicked Heart -Spiritual Living, Christian Faith.

Where Are People Leaving the Church Going? Is Obama at War With Us. Homicides of transgender women in US nearly double to 22. Why Islam is a Religion of War. Muslims around the world condemn terrorism after the Paris attacks. Newsmax. Pastor Who Called Islam 'Satanic' Refuses to Run From Trial. Shariaville, USA: America's 1st Muslim-majority City Council. Justice Kennedy: Christians with convictions resigned under Hitler and they should today too. A global map of wind, weather, and ocean conditions. Ten Signs Your Church Has Been Secularized - Announces new payment structure and bonuses. 20 Sites To Get Paid For Writing And Blogging – Best Of. Best Free Blogging Sites - How To Start A Blog. The 18 best blogging platforms on the internet in 2015. What I Wish More People Understood About Losing A Child. This Mountain Can and Will Be Moved.

Comments. The day Christians were martyred on American soil. RT Kendall: The Ache I Feel as I Watch America Brings Me to Tears. Prophecy: You Can Sound the Alarm, But ... Call it 'gender fluidity': Schools to teach kids there's no such thing as boys or girls. Gender Fluidity Promoted to Children As Young As Three. I’m a pedophile, but not a monster. Is Pedophilia Next?

One Ex-Lesbian's Plea to Pastors Across America. How Should We Practically Respond to the Shemitah Predictions? 1 Big Reason Spiritual People Are Leaving Churches. Clerk the Only One Obeying the Law. Call me 'ze,' not 'he': University wants everyone to use 'gender inclusive' pronouns. It Was Easier to Give in Than Keep Running. Spiritual Abuse - Religious Abuse - Cults - Cult-like Churches - Controlling Ministries - Spirit of Jezebel - Jezebel Spirit - Spirit of Control - Cultish Churches - Jennifer LeClaire Ministries. Paying a Dear Price for the Anointing That Breaks the Yoke. An Open Letter to Rachel Held Evans: 3 Ways to Keep Christianity Weird and Relevant.

Houston, We Have a Problem: Video Shows Hillsong’s Brian Houston Knew About Open ‘Gays’ in Choir. Why TV's ‘Broadway Boyfriends’ will keep singing with Hillsong Church (COMMENTARY) Forever Gay? Contending with God for Your Breakthrough. Your Questions Answered By Chuck Missler Meanings Of The Names In Genesis 5 - Chuck Missler. Hidden Message in Genesis. WOW! Unbelievable Hidden Message In The First book Of The Bible - Bible Study Times. Parenting Kiddos who Sabotage Big Days. Leonard Ravenhill and the Other Prophetic Voices We Didn't Heed — Charisma News. Saul Alinsky's 12 Rules for Radicals. Major Breaking News: Males Are Not Females — Charisma News. The Bible Does Not Condemn Homosexuality. Why Does Franklin Graham Not Get This?