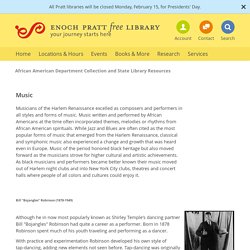 Throughout her career her recital programs mixed arias, art songs, and spirituals. Marian Anderson began singing at a young age and by the time she was six she was singing with the Union Baptist Junior Choir, At age 13 she was singing with the Senior Choir and substituting for absent choir members. She was often sent to represent the church choirs and quartets at competitions in New York City. Before she was eight Marian taught herself to play both the violin and the piano. As a teenager Anderson sang with the school chorus and earned money by singing at other churches and social functions.

In the mid-1920's Anderson gave her first concert at New York's Town Hall where she received poor reviews - especially for her singing of German Lieder. In 1939 Anderson was denied the use of Constitution Hall for an Easter Sunday concert by the Daughters of the American Revolution. Websites: The Harlem Renaissance. The Savoy Ballroom in Harlem in 1926 was The Place and Lindy Hop was The Dance! 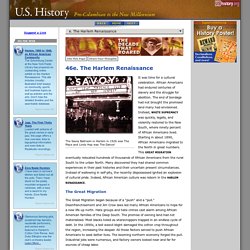 It was time for a cultural celebration. African Americans had endured centuries of slavery and the struggle for abolition. The end of bondage had not brought the promised land many had envisioned. Instead, white supremacy was quickly, legally, and violently restored to the New South, where ninety percent of African Americans lived. Starting in about 1890, African Americans migrated to the North in great numbers. The Great Migration The Great Migration began because of a "push" and a "pull. " Unfortunately, northerners did not welcome African Americans with open arms. Drop Me Off in Harlem. Eubie Blake Lyricist, composer, pianist 1883-1983 Cab Calloway Vocalist, bandleader 1907-1994 Duke Ellington Composer, musician, bandleader 1899-1974 Fletcher Henderson Bandleader, arranger, pianist 1897-1952 James Johnson Pianist, composer 1894-1955 Bessie Smith Singer 1894-1937 William Still Composer, arranger, conductor 1895-1978 Fats Waller Pianist, vocalist, composer 1904-1943 Chick Webb Drummer, bandleader 1909-1939. 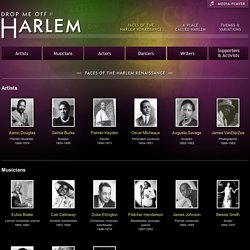 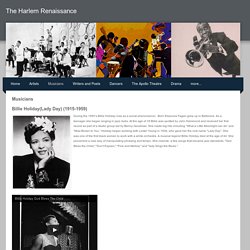 Born Eleanora Fagan grew up in Baltimore. As a teenager she began singing in jazz clubs. At the age of 18 Billie was spotted by John Hammond and received her first record as part of a studio group led by Benny Goodman. Chick Webb (1905-1939) Born William Henry Webb, know as Chick Webb was and American jazz ad swing music drummer. Lift Every Voice and Sing with Lyrics. Martin Luther King - I Have A Dream Speech - August 28, 1963 (Full Speech) 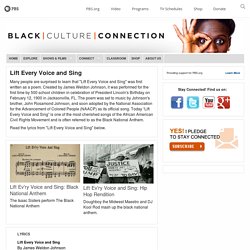 Created by James Weldon Johnson, it was performed for the first time by 500 school children in celebration of President Lincoln's Birthday on February 12, 1900 in Jacksonville, FL. The poem was set to music by Johnson's brother, John Rosamond Johnson, and soon adopted by the National Association for the Advancement of Colored People (NAACP) as its official song. 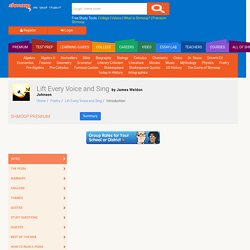 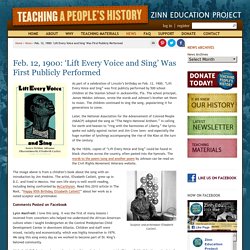 The school principal, James Weldon Johnson, wrote the words and Johnson’s brother set them to music. The children continued to sing the song, popularizing it for generations to come. Later, the National Association for the Advancement of Colored People (NAACP) adopted the song as “The Negro National Anthem.” In calling for earth and heaven to “ring with the harmonies of Liberty,” the lyrics spoke out subtly against racism and Jim Crow laws—and especially the huge number of lynchings accompanying the rise of the Klan at the turn of the century. Lift Every Voice and Sing - a brief history for all. Joey Alexander plays "Ma Blues" Famous Blues Artists. Robert Johnson - Robert Johnson's Cross Road Blues. BLUES TIMELINE.