Glogin?mobile=1&URI= What Will the Cartels Do After Drugs Are Legal? Opponents of legalizing drugs often argue that you can’t really eliminate the cartels because they'll just move on to other crimes. 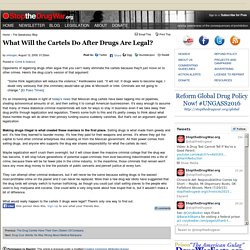 Here's the drug czar's version of that argument: "Some think legalization will reduce the violence," Kerlikowske said. "It will not. If drugs were to become legal, I doubt very seriously that (the criminals) would take up jobs at Microsoft or Intel. Criminals are not going to change. " It's an interesting debate in light of today's news that Mexican drug cartels have been tapping into oil pipelines, stealing astronomical amounts of oil, and then selling it to corrupt American businessmen.

Making drugs illegal is what created these maniacs in the first place. Maybe legalization won't crush them overnight, but it will close down the massive criminal college that the drug war has become. They can attempt other criminal endeavors, but it will never be the same because selling drugs is the easiest most-profitable crime on the planet and it can never be replaced. U.S. war on drugs empowers Mexico cartels (Opinion) That's a sad statement, if you think about it. 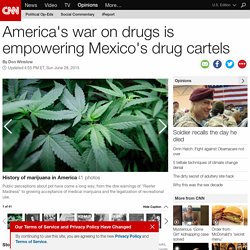 Particularly given that 15 years is less than half the life of this particular war, which, at 44, has gone on longer than the Civil War, World War II, Vietnam and Afghanistan combined. Don Winslow The war has multiple fronts, but my particular beat is the Mexican border, across which the vast majority of illegal drugs now come into the United States.

I've gone out with the Border Patrol, walked the line, sat in cars observing the crossing under the hostile gaze of cartel gunmen on the other side. I've talked with DEA agents, cops, drugs users, and yes, drug traffickers. Fifteen years on the border observing the war on drugs. You know what drug isn't coming across in such great volume any more? What Will the Cartels Do After Drugs Are Legal? Losing marijuana business, Mexican cartels push heroin and meth. SAN YSIDRO, Calif. — Mexican traffickers are sending a flood of cheap heroin and methamphetamine across the U.S. border, the latest drug seizure statistics show, in a new sign that America’s marijuana decriminalization trend is upending the North American narcotics trade. 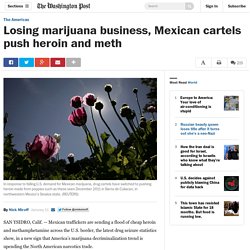 The amount of cannabis seized by U.S. federal, state and local officers along the boundary with Mexico has fallen 37 percent since 2011, a period during which American marijuana consumers have increasingly turned to the more potent, higher-grade domestic varieties cultivated under legal and quasi-legal protections in more than two dozen U.S. states. Made-in-the-USA marijuana is quickly displacing the cheap, seedy, hard-packed version harvested by the bushel in Mexico’s Sierra Madre mountains. U.S. law enforcement agents seized 2,181 kilograms of heroin last year coming from Mexico, nearly three times the amount confiscated in 2009. Heroin seizures along the U.S. U.S. “It’s like a fish fry,” Aki said. The economic case for the US to legalize all drugs. Novelist EL Doctorow has died in a Manhattan hospital from complications of lung cancer. 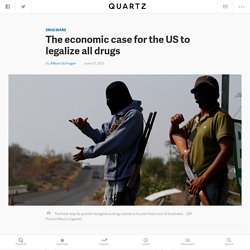 He was 84. He was the recipient of many distinguished literary prizes, among them the National Book Award, two National Books Critics Circle Awards, the PEN/Faulkner Award, the William Dean Howells Medal of the American Academy of Arts and Letters, the National Humanities Medal, and most recently, the Library of Congress Prize for American fiction. Shortly after the news of Doctorow’s death became public, President Obama on Twitter called Doctorow “one of America’s greatest novelists. His books taught me much, and he will be missed.” He will be missed. Doctorow rose to prominence with The Book of Daniel (1971) and Ragtime (1975) and had the distinct honor of being among a small group of American novelists who was admired by an international readership and academics alike. Doctorow was born and raised in New York City within a secular humanist and Jewish cultural milieu. Drug Dealers Unfazed By Legal Pot In Colorado - BuzzFeed News.