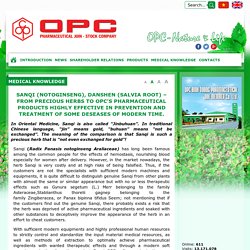 In traditional Chinese language, “jin” means gold, “buhuan” means “not be exchanged”. The meaning of the comparison is that Sanqi is such a precious herb that is “not even exchanged for gold”! Sanqi (Radix Panasis notoginseng Araliaceae) has long been famous among the common people for the effects of hemostasis, nourishing blood especially for women after delivery. However, in the market nowadays, the herb Sanqi is very costly and at high risks of being falsified. Thus, if the customers are not the specialists with sufficient modern machines and equipments, it is quite difficult to distinguish genuine Sanqi from other plants with almost the same or similar appearance but with no or less therapeutic effects such as Gynura segetum (L.) Sanqi (Radix Panasis notoginseng Araliaceae) Tam that OPC Fengshi OPC- Sanqi’s role in treating bone and joint problems: Arthritis capsule FENGSHI OPC Danshen (Radix Salviae multiorrhizae Lamiaceae) 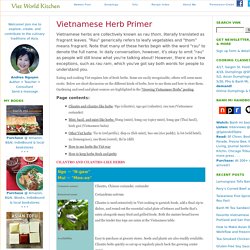 "Rau" generically refers to leafy vegetables and "thom" means fragrant. Note that many of these herbs begin with the word "rau" to denote the full name. In daily conversation, however, it's okay to omit "rau" as people will still know what you're talking about! However, there are a few exceptions, such as rau ram, which you've got say both words for people to understand you. 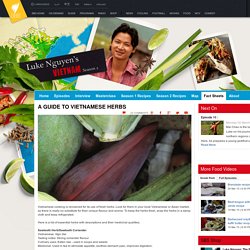 Look for them in your local Vietnamese or Asian market, as there is really no substitute for their unique flavour and aroma. To keep the herbs fresh, wrap the herbs in a damp cloth and keep refrigerated. Here is a list of essential herbs with descriptions and their medicinal qualities. Sawtooth Herb/Sawtooth CorianderVietnamese: Ngò GaiTasting notes: Strong coriander flavourCulinary uses: Eaten raw - used in soups and saladsMedicinal: Used in tea to stimulate appetite, soothes stomach pain, improves digestion. 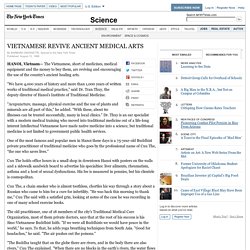 Tran Thuy, the deputy director of Hanoi's Institute of Traditional Medicine. ''Acupuncture, massage, physical exercise and the use of plants and minerals are all part of this,'' he added. ''With these, about 60 illnesses can be treated successfully, many in local clinics.'' Dr. One of the most famous and popular men in Hanoi these days is a 75-year-old Buddhist private practitioner of traditional medicine who goes by the professional name of Cuu The, ''the one who saves lives.'' Cuu The holds office hours in a small shop in downtown Hanoi with posters on the walls and a sidewalk sandwich board to advertise his specialties: liver ailments, rheumatism, asthma and a host of sexual dysfunctions. Dr. Dr. Traditional herbal medicine still saves lives - Features. Traditional herbal medicine still saves lives Herbs found in the wild can treat many ailments, so researchers are growing them on a wider scale in order to provide affordable herbal treatments for those in need. 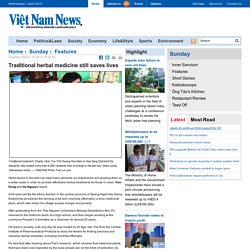 Tran Dong and Ha Nguyen report. A 64-year-old Ba Na ethnic teacher in the central province of Quang Ngai'sTay Giang District has pioneered the farming of ba kich (morinda officinalis), a tonic medicinal plant, which later helps his village escape hunger and poverty. After graduating from the Thai Nguyen University's Biology Department, Briu Po returned to the district to teach at a high school, and then began working at the commune People's Committee as a chairman for almost 25 years. He lived in poverty, until one day he was invited by Dr Ngo Van Trai from the Central Institute of Pharmaceutical Products to study the terrain for finding precious and valuable herbal remedies, including morinda officinalis. "In 2007, we tried growing 900 plants.