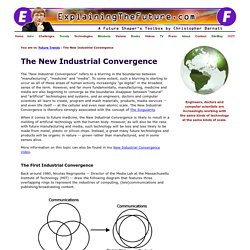 To some extent, such a blurring is starting to occur as all of these areas of human activity increasingly "go digital" in the broadest sense of the term. However, and far more fundamentally, manufacturing, medicine and media are also beginning to converge as the boundaries disappear between "natural" and "artificial" technologies and systems, and as engineers, doctors and computer scientists all learn to create, program and mash materials, products, media services -- and even life itself -- at the cellular and even near-atomic scale. The New Industrial Convergence is therefore strongly associated with the concept of The Singularity. When it comes to future medicine, the New Industrial Convergence is likely to result in a melding of artificial technology with the human body.

NOAH15-Top 10 Disruptors(May-15) Tech visionary James Martin, who predicted web in 1977, dies. The influential technology author James Martin, who was nominated for the Pulitzer Prize in 1977 for his internet-predicting book The Wired Society, has died at the age of 79. 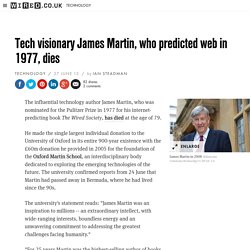 He made the single largest individual donation to the University of Oxford in its entire 900-year existence with the £60m donation he provided in 2005 for the foundation of the Oxford Martin School, an interdisciplinary body dedicated to exploring the emerging technologies of the future. The university confirmed reports from 24 June that Martin had passed away in Bermuda, where he had lived since the 90s.

The university's statement reads: "James Martin was an inspiration to millions -- an extraordinary intellect, with wide-ranging interests, boundless energy and an unwavering commitment to addressing the greatest challenges facing humanity. " "For 25 years Martin was the highest-selling author of books on computing and related technology. Image: Wikimedia Commons/Neokoenig/CC BY-SA 3.0. Microsoft Buys Skype for $8.5 Billion. Why, Exactly?

Just days after reports that Google and Facebook were interested in partnering with, and possibly buying VoIP company Skype, Microsoft announced that it was buying the company for $8.56 billion in cash. 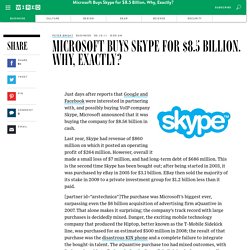 Last year, Skype had revenue of $860 million on which it posted an operating profit of $264 million. However, overall it made a small loss of $7 million, and had long-term debt of $686 million. This is the second time Skype has been bought out; after being started in 2003, it was purchased by eBay in 2005 for $3.1 billion. EBay then sold the majority of its stake in 2009 to a private investment group for $1.2 billion less than it paid. [partner id=”arstechnica”]The purchase was Microsoft’s biggest ever, surpassing even the $6 billion acquisition of advertising firm aQuantive in 2007. Microsoft’s own software already has considerable overlap with Skype.

Skype, in contrast, has around a third the number of active users: 124 million each month. Skype certainly has some things of value. The four pillars of a decentralized society. The Battle of Our Generation: Centralized vs Decentralized Networks — Bitcoin College. To date, only a small number of these "peer-to-peer" networks have been widely used. 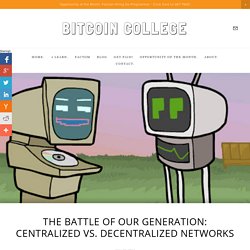