It's been happening for a while but this is the 21st C global malaise. Our loss of habitat, wilderness, our place.

Solastalgia in a time of disquiet. Anchorage’s second real snow of this winter finally arrived in late December. 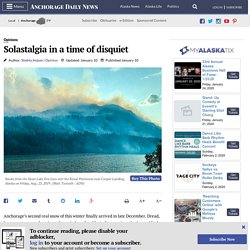 Dread, however, tempered my joy — I worried another blast of warm air and rain would take it all away. I fear the sight of snow might become a privilege one day. The first big snowfall after Thanksgiving had softened fall’s dark days. But within days temperatures soared, rains arrived, and snow disappeared. Anchorage turned drab again and my spirits, momentarily uplifted, sank again. It happened again. Most of this fall and into winter, the grass and clover remained green in my backyard and birch sprouted buds. These variations don’t bode well for Alaska, my home for more than four decades. Climate-related disasters regularly make the news — Australia is the latest. In some areas of the world drought renders everything to dust, searing heat and fires create infernos, or water wreaks destruction on property and lives. We have had years of hot summers and warm winters before. The summer of 2019 began normally. Psychoterratica – Glenn A Albrecht. Is There an Ecological Unconscious?

About eight years ago, Glenn Albrecht began receiving frantic calls from residents of the Upper Hunter Valley, a 6,000-square-mile region in southeastern . 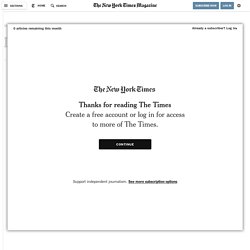 For generations the Upper Hunter was known as the “ of the South” — an oasis of alfalfa fields, dairy farms and lush English-style shires on a notoriously hot, parched continent. “The calls were like desperate pleas,” Albrecht, a philosopher and professor of sustainability at Murdoch University in , recalled in June. “They said: ‘Can you help us? We’ve tried everyone else. Is there anything you can do about this?’ Residents were distraught over the spread of mining in the Upper Hunter. To see the full article, subscribe here. Continue reading the main story. What is Solastalgia? - Wings, Worms and Wonder. I am really excited about this week’s posts. 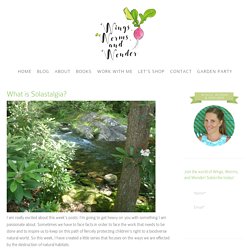 I’m going to get heavy on you with something I am passionate about. Sometimes we have to face facts in order to face the work that needs to be done and to inspire us to keep on this path of fiercely protecting children’s right to a biodiverse natural world. So this week, I have created a little series that focuses on the ways we are effected by the destruction of natural habitats.

Psychoterratica - solastalgia and more. Psychoterratica: more. The negative and positive concepts that are relevant to a fuller understanding of the human-environment relationship have been incorporated by me into a psychoterratic typology (below). 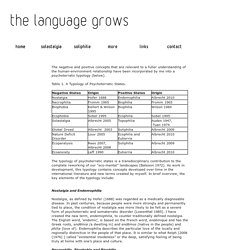 Table 1. A Typology of Psychoterratic States. The typology of psychoterratic states is a transdisciplinary contribution to the complete reworking of our “eco-mental” landscapes (Bateson 1972). As work in development, this typology contains concepts developed over time in the international literature and new terms created by myself. In brief overview, the key elements of the typology include: Future - Have you ever felt ‘solastalgia’? Every few months, Oxford Dictionaries makes global headlines when it adds new words to its online vocabulary – the most recent updates include ‘hangry’ (anger resulting from hunger) and ‘manspreading’ (sitting with legs wide apart). 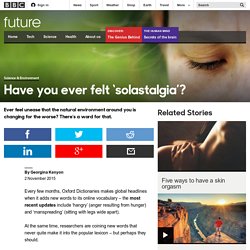 At the same time, researchers are coining new words that never quite make it into the popular lexicon – but perhaps they should. While you won’t find it in the Oxford English Dictionary, philosopher Glenn Albrecht once coined one such word while working at the University of Newcastle in Australia. 'Solastalgia’ – a portmanteau of the words ‘solace’ and ‘nostalgia’ – is used not just in academia but more widely, in clinical psychology and health policy in Australia, as well as by US researchers looking into the effects of wildfires in California. It describes the feeling of distress associated with environmental change close to your home, explains Albrecht. Solastalgia: Living With the Environmental Damage Caused By Natural Disasters. Crossref Citations This article has been cited by the following publications. 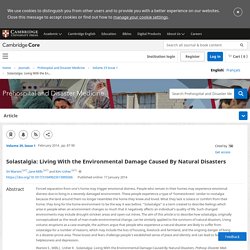 This list is generated based on data provided by CrossRef. Scott, Katherine K. and Errett, Nicole A. 2018. Content, Accessibility, and Dissemination of Disaster Information via Social Media During the 2016 Louisiana Floods. Journal of Public Health Management and Practice, Vol. 24, Issue. 4, p. 370. Hiraeth. Hiraeth, pronounced [hɨraɪ̯θ], is a Welsh word that has no direct English translation. 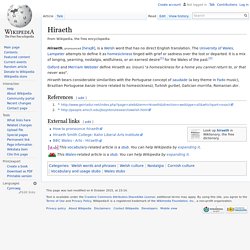 The University of Wales, Lampeter attempts to define it as homesickness tinged with grief or sadness over the lost or departed. It is a mix of longing, yearning, nostalgia, wistfulness, or an earnest desire[1] for the Wales of the past.[2] Oxford and Merriam Webster define Hiraeth as: (noun) "a homesickness for a home you cannot return to, or that never was". Hiraeth bears considerable similarities with the Portuguese concept of saudade (a key theme in Fado music), Brazilian Portuguese banzo (more related to homesickness), Turkish gurbet, Galician morriña, Romanian dor. References[edit] External links[edit]