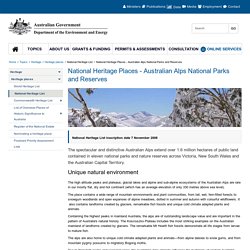 Unique natural environment. Desert. AUSTRALIA IS THE driest inhabited continent in the world – only Antarctica is drier. 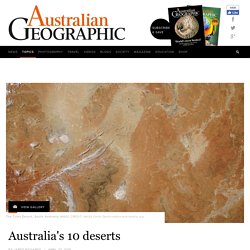 Seventy per cent of the mainland receives less than 500mm of rain annually, which classifies most of Australia as arid or semi-arid. While the Simpson and the Great Victoria deserts are the best known, Australia has a total of ten deserts. Defining a desert in Australia is complicated. Typically defined as areas receiving on average less than 250mm of rain per year, Australia’s deserts can sometimes technically exceed this average due to our uneven rainfall distribution. Forests. Forests are places with tall trees and a thick canopy. 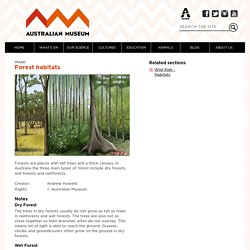 In Australia the three main types of forest include dry forests, wet forests and rainforests. Creator: Andrew Howells Rights: © Australian Museum Notes Dry Forest The trees in dry forests usually do not grow as tall as trees in rainforests and wet forests. Wet Forest Wet forests have very tall trees and they are usually found in areas where it rains a lot. Rainforest Rainforests have trees of all different heights growing close together. Grasslands. You are here Grasslands are dominated by perennial, mostly tufted or tussock-forming grasses and occur on the vast, undulating western volcanic plains, the northern alluvial plains and in Gippsland. 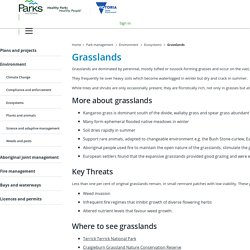 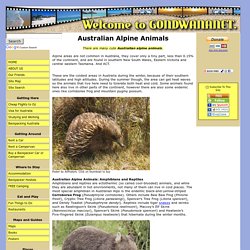 Alpine areas are not common in Australia, they cover only a tiny part, less than 0.15% of the continent, and are found in southern New South Wales, Eastern Victoria and central western Tasmania. Indigenous Connections. When we talk about learning to live in harmony with our environment it can be easy to forget that there are people in Australia who have been doing this for longer than most of us can imagine. Australia’s indigenous peoples have a huge amount of knowledge about our country and a strong connection to the land.

They also have a relationship with the environment that is incredibly sustainable. Classroom questions What do your students already know about the ways that indigenous people live and their relationship to our environment? Engage your students in a discussion about this issue using the following questions to guide your discussion (suggested answers included): Aboriginal Culture of the indigenous people of the Daintree. ‘Welcome to Kuku Yalanji country. 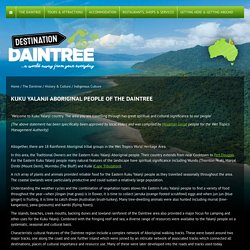 The area you are travelling through has great spiritual and cultural significance to our people’ (The above statement has been specifically been approved by local elders and was compiled by Mossman Gorge people for the Wet Tropics Management Authority) Altogether, there are 18 Rainforest Aboriginal tribal groups in the Wet Tropics World Heritage Area. In this area, the Traditional Owners are the Eastern Kuku Yalanji Aboriginal people. Their country extends from near Cooktown to Port Douglas. A rich array of plants and animals provided reliable food for the Eastern Kuku Yalanji people as they travelled seasonally throughout the area. Blue Mountains Australia Guide. Here are some interesting facts and statistics about Australia’s Blue Mountains: Fact: The Blue Mountains is a popular tourist destination receiving around three million day trippers each year.Fact: Domestic day trippers spend around $250 million per year in the area.Fact: The Blue Mountains is a great holiday destination for families and kids. 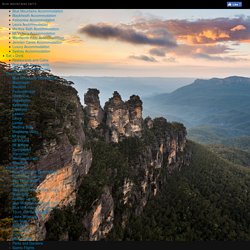 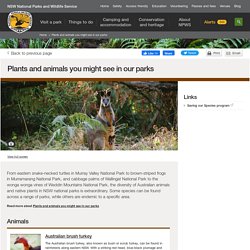 With a striking red head, blue-black plumage and booming call, these distinctive Australian birds are easy to spot while bird watching in several NSW national parks. Australian fur seal The largest fur seal, Australian fur seals are found in isolated rocky outcrops and islands along the NSW coast. They come ashore to form breeding colonies and can often be seen at Montague Island Nature Reserve. Blue Mountains City Tourism. Visit the Blue Mountains. Visitors to the Blue Mountains can experience history through diverse experiences — from prehistoric trees, Aboriginal culture and Jenolan Caves to convict-built roads, industrial age remnants and some of the most iconic man-made landmarks and attractions in the land including Scenic World, the Hydro Majestic and Carrington hotels. 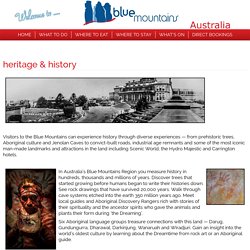 In Australia’s Blue Mountains Region you measure history in hundreds, thousands and millions of years. Discover trees that started growing before humans began to write their histories down. See rock drawings that have survived 20,000 years. Walk through cave systems etched into the earth 350 million years ago. Guide to The Three Sisters. Visit the Waradah Aboriginal Centre The Three Sisters watch over the land of the traditional country of the Darug, Gundungurra, Wiradjuri and Dharwal Aboriginal people. 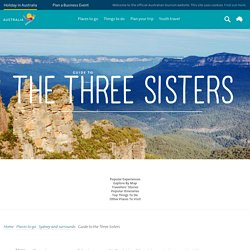 Blue Mountains History in Detail - Blue Mountains Australia. Sustainability explained through animation. The tomorrow book. Baiames Ngunnhu - the story of Brewarrina Fish Traps. NSW Holidays & Accommodation, Things to Do, Attractions and Events. Super Trawler: 18/09/2012, Behind the News. The second biggest fishing trawler in the world arrived in Australia last week. But with it came a sea of controversy. The Government has tried to stop the super trawler from dropping its huge nets in Australian waters.

But the company behind it says it's doing nothing wrong and has followed all the rules. So why has it become such a controversial issue? Let's take a look. NATHAN BAZLEY, REPORTER: Fans of fishing often say too much is never enough. They're talking about the age old pastime of chucking a line in though. It's been caught hook, line and sinker in a net of protest. The two types of fish it goes after are jack mackerel and red bait. Well it was planned to be used for actual fishing. Carbon Footprints. Ecological Footprint Calculator - WWF - WWF-Australia.

WWF is one of Australia’s most trusted conservation organisations. At WWF, we work in Australia and in our Asia-Pacific backyard to protect endangered species and habitats, meet the challenge of climate change, and build a world where people live in harmony with nature. This would not be possible without financial support from our community. Thank you! If you would like to help us, please make a donation. All donations of $2 or more to WWF-Australia are tax-deductible.