For the Elites, Education for the 99% Is Not Part of the Plan. The Fraudulent Media Campaign To Scandalize Obamacare's Passage. Fox News dishonestly claimed that MIT economist Jonathan Gruber's comment that the Affordable Care Act (ACA) "was written in a tortured way" to minimize criticism proves that the law was passed deceitfully. 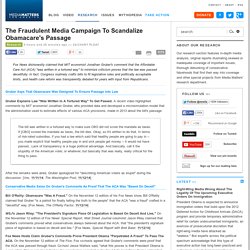 In fact, Congress routinely crafts bills to fit legislative rules and politically acceptable limits, and health care reform was transparently debated for years with input from Republicans. Gruber Says That Obamacare Was Designed To Ensure Passage Into Law Gruber Explains Law "Was Written In A Tortured Way" To Get Passed. Here Comes the Sun: America's Solar Boom, in Charts. This post first appeared at Mother Jones. 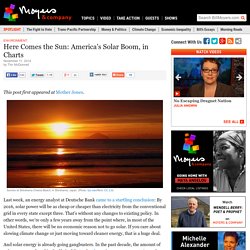 Sunrise at Shirahama Ohama Beach, in Shirahama, Japan. (Photo: Izu navi/flickr CC 2.0) Last week, an energy analyst at Deutsche Bank came to a startling conclusion: By 2016, solar power will be as cheap or cheaper than electricity from the conventional grid in every state except three. That’s without any changes to existing policy. In other words, we’re only a few years away from the point where, in most of the United States, there will be no economic reason not to go solar. And solar energy is already going gangbusters. Still, solar is a bit player, providing less than half of 1 percent of the energy produced in the United States. The US and China Just Announced a Huge Deal on Climate — and It's a Game Changer. This post first appeared at Mother Jones. 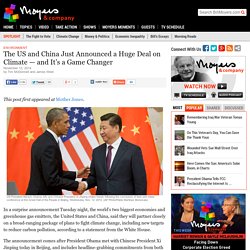 US President Barack Obama, left, and Chinese President Xi Jinping shake hands following the conclusion of their joint news conference at the Great Hall of the People in Beijing, Wednesday, Nov. 12, 2014. (AP Photo/Pablo Martinez Monsivais) In a surprise announcement Tuesday night, the world’s two biggest economies and greenhouse gas emitters, the United States and China, said they will partner closely on a broad-ranging package of plans to fight climate change, including new targets to reduce carbon pollution, according to a statement from the White House.

The announcement comes after President Obama met with Chinese President Xi Jinping today in Beijing, and includes headline-grabbing commitments from both countries that are sure to breathe new life into negotiations to reach a new climate treaty in Paris next year. Tuesday’s announcement is equally remarkable for China’s commitment. Obama Can Reform Dark Money With a Stroke of a Pen. 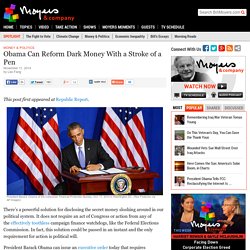 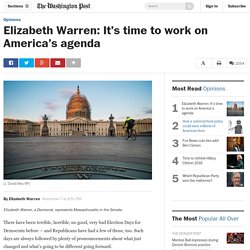 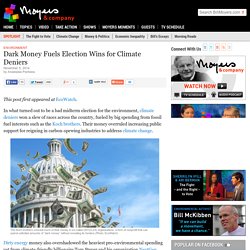 In what turned out to be a bad midterm election for the environment, climate deniers won a slew of races across the country, fueled by big spending from fossil fuel interests such as the Koch brothers. Their money overruled increasing public support for reigning in carbon-spewing industries to address climate change. The Koch brothers conceal much of their money in so-called (501)(c)(4) organizations, a form of nonprofit that can spend unlimited amounts of “dark money” without revealing its funders. (Photo: EcoWatch) Dirty energy money also overshadowed the heaviest pro-environmental spending yet from climate-friendly billionaire Tom Steyer and his organization NextGen Climate. Gerrymandering Rigged the 2014 Elections for GOP Advantage. This post first appeared at Republic Report. 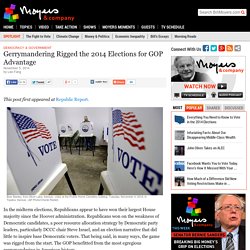 Bow Stanley, from Silver Lake, Kansas, votes at the Prairie Home Cemetery building, Tuesday, November 4, 2014, in Topeka, Kansas. (AP Photo/Charlie Riedel) In the midterm elections, Republicans appear to have won their largest House majority since the Hoover administration. Republicans won on the weakness of Democratic candidates, a poor resource allocation strategy by Democratic party leaders, particularly DCCC chair Steve Israel, and an election narrative that did little to inspire base Democratic voters.

Money Won on Tuesday, But Rules of the Game Changed. This post first appeared at OpenSecrets blog. 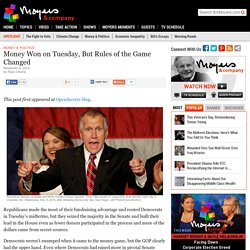 Republican Senate candidate and North Carolina House Speaker Thom Tillis speaks to supporters at an election night rally in Charlotte, NC, Wednesday, Nov. 5, 2014, after defeating Democratic Sen. Kay Hagan. (AP Photo/Chuck Burton) Republicans made the most of their fundraising advantage and routed Democrats in Tuesday’s midterms, but they seized the majority in the Senate and built their lead in the House even as fewer donors participated in the process and more of the dollars came from secret sources. Democrats weren’t swamped when it came to the money game, but the GOP clearly had the upper hand. The $9 Billion Witness: Meet JPMorgan Chase's Worst Nightmare. She tried to stay quiet, she really did. 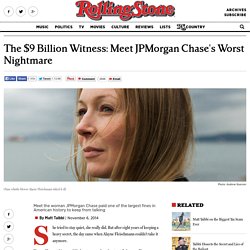 But after eight years of keeping a heavy secret, the day came when Alayne Fleischmann couldn't take it anymore. "It was like watching an old lady get mugged on the street," she says. "I thought, 'I can't sit by any longer.'" Fleischmann is a tall, thin, quick-witted securities lawyer in her late thirties, with long blond hair, pale-blue eyes and an infectious sense of humor that has survived some very tough times.

She's had to struggle to find work despite some striking skills and qualifications, a common symptom of a not-so-common condition called being a whistle-blower. Featured News From. This billionaire thinks the Fed is missing the hyperinflation in the Hamptons. The Inside Story of How Republicans Gaffe-Proofed Their Candidates. Corporate Triumphs, Progressive Victories and the Roadmap for a Democratic Revival. (Image: Flickr/ TaxRebate.org.uk) Tuesday’s Republican wave of election victories did not reflect public opinion or the public mood. 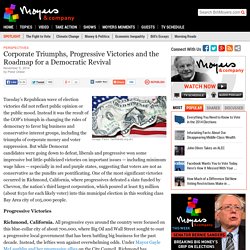 Gerrymandering Rigged the 2014 Elections for GOP Advantage. The complete guide to every public eyewitness interview in the shooting death of Mike Brown. Mike Brown was shot and killed by Officer Darren Wilson in broad daylight on a hot Saturday afternoon in Ferguson, Missouri. Poverty Denialism in a Culture of Cruelty: Bashing the Poor as Right-Wing Amusement.