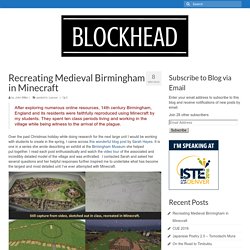 They spent ten class periods living and working in the village while being witness to the arrival of the plague. Over the past Christmas holiday while doing research for the next large unit I would be working with students to create in the spring, I came across this wonderful blog post by Sarah Hayes. It is one in a series she wrote describing an exhibit at the Birmingham Museum she helped put together. I read each post enthusiastically and watch the video tour of the associated and incredibly detailed model of the village and was enthralled. Euro 2016 Minecraft Competition. It’s an exciting few weeks ahead as both the Republic of Ireland & Northern Ireland are competing in Euro 2016. 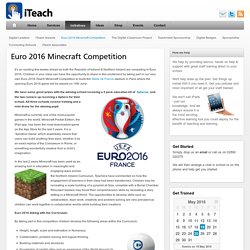 Children in your class can have the opportunity to share in this excitement by taking part in our very own Euro 2016 iTeach Minecraft Competition to build the Stade de France stadium in Paris where the opening Euro 2016 game will be played on 10th June. We have some great prizes with the winning school receiving a 5 pack education kit of Spheros, and the two runners up receiving a Sphero for their school.

All three schools receive training and a mini drone for the winning pupil. Minecraft is currently one of the most popular games in the world. Build a Minecraft Mini-Game - Video Masterclasses for Kids by MakeMatic. Minecraft in Education – How to Move Beyond the Tool Into Game-based Learning. – Minegage News. Is Minecraft in the Classroom Gamebased Learning, Gamification or Something Else? – Minegage News. GamED Academy, LLC. Find the perfect course to fit your schedule and learning goals! 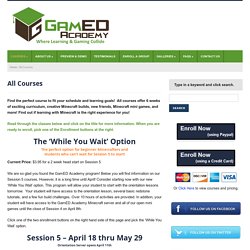 All courses offer 6 weeks of exciting curriculum, creative Minecraft builds, new friends, Minecraft mini games, and more! Find out if learning with Minecraft is the right experience for you! Read through the classes below and click on the title for more information. When you are ready to enroll, pick one of the Enrollment buttons at the right. Minecraft helps kids with autism build richer lives. Two hours north of Sydney, the kids of 3-6 Rainbow, a class in Aspect Hunter school combining grades 3-6, are playing Minecraft. 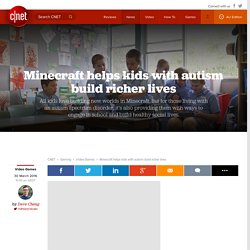 The students are bright, bubbly and talkative -- pretty much what you'd expect from any group of kids ages 8 to 11. But this class is a little different. It's run for children with autism spectrum disorder (ASD), a diagnosis that covers a broad range of difficulties with social interactions, communication and repetitive behaviour. Yet you'd have trouble guessing that as the kids excitedly play together over a networked Minecraft session. Since Mojang, now owned by Microsoft, first released the immensely popular game in 2009, it's found a dedicated fan base of teachers, parents and kids living with ASD.

Before he started playing Minecraft in the classroom, Hamish Ellem, 11, would do a lot of "aimless wandering" at the library, say his parents, Walter and Tracy. Life lessons. My First Minecraft Map﻿ - Mr. Ullman's Class Website. Teachercast.tv talk about how they use Minecraft in the classroom. Making Learning in Minecraft Fun! – The Curriculum How to Guide – Minegage News. Well here we are, educators around the world, enticed and inspired by this new opportunity to engage and inspire learning in our students by way of Minecraft. 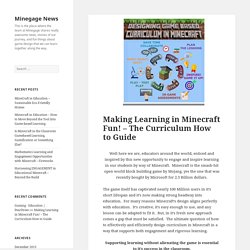 Minecraft is the smash-hit open world block building game by Mojang, yes the one that was recently bought by Microsoft for 2.5 Billion dollars. The game itself has captivated nearly 100 Million users in it’s short lifespan and it’s now making strong headway into education. For many reasons Minecraft’s design aligns perfectly with education. It’s creative, it’s easy enough to use, and any lesson can be adapted to fit it. But, in it’s fresh new approach comes a gap that must be satisfied. Supporting learning without alienating the game is essential to it’s success in the classroom. So we’ve put together a nice little reference info-graphic that should help you maximize the success of your Educational Minecraft lessons. MinecraftEDU. Första lektionen – Minecraftklasser. Minecraft gir læringskraft. Minecraft er et byggespill, ofte beskrevet som digital lego, som siden beta-lansering i 2009 har blitt et av de mest populære spillene i verden. 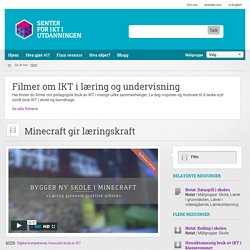 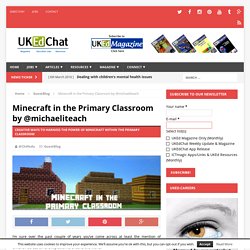 It is one of the most popular games in the world. It is played by millions of children across different platforms around the world. This is a re-blog post originally posted by Michael O’Kane and published with kind permission. The original post can be found here. Do you have a blog post which you are proud of? I have to admit, up until just over a year ago I dismissed it as just another game that children loved playing, just as I had loved, and still do, playing FIFA football games. Minecraft can be used in the classroom not only to engage and inspire, but to aid and develop learning in Literacy, Numeracy, W.A.U. and Digital Citizenship. 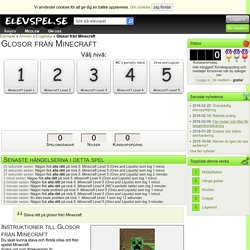