3 Reasons NOT to Gamify Education. Gamifying education is all the rage right now. 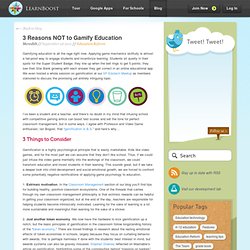 The 100-Second Guide To Gamification In Education. 5 Reasons We Use Social Media 9.81K Views 0 Likes There are many reasons we use social media. From the basic to the more advanced, the tool is simply ubiqutious and addictive. Gamification Classroom. Educational Gaming Commons. In addition to the “fun” aspect of gaming, there are a lot of additional mechanics that are added to games in an effort to make them more compelling for the player. 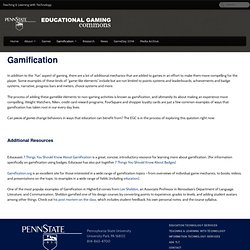 Some examples of these kinds of “game-like elements” include but are not limited to points systems and leaderboards, achievements and badge systems, narrative, progress bars and meters, choice systems and more. The process of adding these gamelike elements to non-gaming activities is known as gamification, and ultimately its about making an experience more compelling. Weight Watchers, Nike+, credit card reward programs, FourSquare and shopper loyalty cards are just a few common examples of ways that gamification has taken root in our every day lives. ClassBadges Is A Free Way To Gamify Your Classroom. Looking to find a new, simple, and free way to gamify your classroom? There a new web tool out that you should probably know about.

It’s called ClassBadges and it’s a free online tool where teachers can award badges for student accomplishments. Three Ways Game-Based Learning can be a Helpful Tool. Game-Based Learning Stories Based on Minecraft. Imagine the possibilities… An Augmented-Reality iPhone App Brings Minecraft Objects to the Real World. Fans of augmented reality and Minecraft, a game that lets players build things with virtual blocks, can now mash the two together. 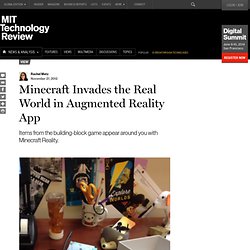 As Wired and others have noted, the minds behind Mindcraft have come up with a new iPhone app, Minecraft Reality, which for $1.99 lets you insert your Minecraft creations into the real world—through the lens of your smartphone’s camera, of course. Lamely, it seems that you must go through the Minecraft Reality site to save your own creations in a place where others using the app can discover them later on, but the app includes a number of sample objects you can place anywhere you’d like, such as a castle, battleship, or Ford Mustang. Users (who should be sporting an iPhone 4S or 5, according to the app’s maker) can also share an image of their juxtaposed fantasy-reality with friends. Effects of Video Games on our Brains ? I am really getting confused here. 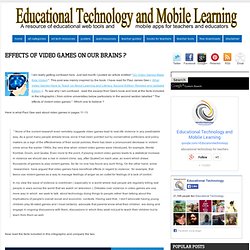 Just last month I posted an article entitled " Do Video Games Make Kids Violent ". This post was mainly inspired by the book I have read for Paul James Gee ( What Video Games Have to Teach Us About Learning and Literacy. Second Edition: Revised and Updated Edition. 5 Excellent Resources for Sploder Game CreatorElectronic Brains. In my previous story, I wrote about the benefits of using Sploder Video Game Creator to support children and adolescents in the development of critical thinking skills in an exciting and engaging way – through games! 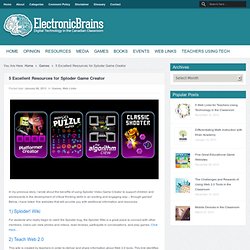 Below, I have listed five websites that will provide you with additional information and resources. Apps to turn your class into iPad game developers! Whether you teach KS1 or KS2, there are apps that will have your class totally enthralled as they create their own iPad games. 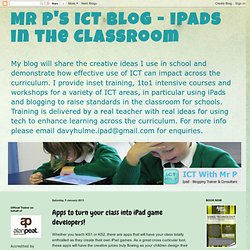 As a great cross curricular tool, these apps will have the creative juices truly flowing as your children design their own games. If you teach Key Stage 1 - the app Tiny Tap is a superb child friendly app that allows children to make quiz like games from photos, pictures from the web or drawings. Free Tools to Incorporate Game-Based Learning. As I work with teachers to implement game-based learning (GBL), they are always looking for any free tools that exist. 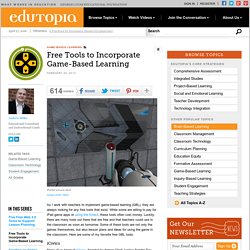 While some are willing to pay for iPad game apps or using the Kinect, these tools often cost money. Luckily, there are many tools out there that are free and that teachers could use in the classroom as soon as tomorrow. Some of these tools are not only the games themselves, but also lesson plans and ideas for using the game in the classroom. How I turned my classroom into a ‘living video game’—and saw achievement soar. By Joli Barker Read more by Contributor March 12th, 2013 In this innovative environment, students are active players in their own educational game. 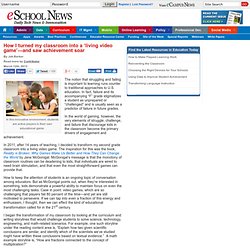 The notion that struggling and failing is important to learning runs counter to traditional approaches to U.S. education. The Gamification of Education? Yesterday, at the SXSWedu conference in Austin, Amplify, the education division of News Corporation, debuted a new tablet computer. 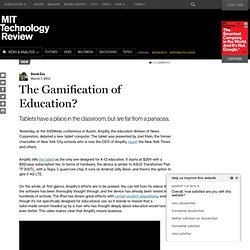 The tablet was presented by Joel Klein, the former chancellor of New York City schools who is now the CEO of Amplify, report the New York Times and others. Amplify bills the tablet as the only one designed for K-12 education. It starts at $299 with a $99/year subscription fee. In terms of hardware, the device is similar to ASUS Transformer Pad TF300TL, with a Tegra 3 quad-core chip.

It runs on Android Jelly Bean, and there’s the option to give it 4G LTE. Gamestar Mechanic: Gamification Made Easy. Children in the 21st century experience media in ways that are vastly different from any previous generation. 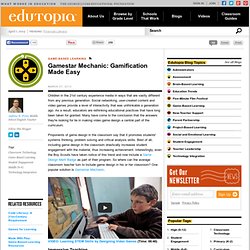 Social networking, user-created content and video games provide a level of interactivity that was unthinkable a generation ago. As a result, educators are rethinking educational practices that have long been taken for granted. Many have come to the conclusion that the answers they're looking for lie in making video game design a central part of the curriculum. Proponents of game design in the classroom say that it promotes students' systems thinking, problem solving and critical analysis skills. Octalysis: Complete Gamification Framework.

(This is the Gamification Framework that I am most known for. Within a year, it was translated into 9 different languages and became classic teaching literature in the gamification space in the US, Europe, Australia and South America.) Octalysis: Complete Gamification Framework. Game Playing in the Classroom: Common Concerns. I Give Up! I’m Finally Going to Gamify My FYC Class. And I’m kind of excited about it. Okay. Using Game Design to Further Your Education and Career. How Games Help Students Embrace Failure. What To Know About Google Play For Education. Yesterday at Google I/O (the company’s annual developer conference), Google released a major new education program called Google Play for Education that organizes and manages the way teachers share apps, books, and other learning content with their classes.

How To Gamify Your Classroom In 6 Easy Steps. Gamification can be a great tool to incorporate into your classroom. Helping with student engagement and motivation, gamification is a growing trend. Student Game Showcase Website from Mari Games Launched. MARI GAMES announces the launch of their competition game center to showcase student game submissions from the Thinking Challenge. MARI GAMES, the innovative gaming competition series, is pleased to announce the launch of the MARI game center located at www.marigames.org. Mari Games. Game-Based Learning in Practice. In early September, my sixth grade social studies students began playing the SimCityEDU beta. Around the same time, my seventh graders began playing a non-digital debate game -- complete with teams, a point system and a leaderboard.

SimCity. Build the city of your dreams and watch as the choices you make shape your city and change the lives of the Sims within it. Heroic learning, come play! Facebook Highlights 5 Growing Gaming Genres in its Ecosystem. Gaming on Facebook is continuing to evolve as the platform attracts new creators and players. The social network now has more genres than ever making up its most-played and biggest-earning games, according to information from Facebook. While Facebook, which has 260 million people playing games each month, used to be known primarily for such games as FarmVille, Dan Morris, the head of the North American Games Division at Facebook, said the top 20 grossing games are more diverse than ever.

Facebook highlighted the diversity in its 2013 Games of the Year review. Can People Learn Empathy From Playing Video Games? Made With Play: Game-Based Learning Resources. How Virtual Games Can Help Struggling Students Learn. Game-Based Learning: Resource Roundup. Scott Nicholson: Meaningful Gamification: Motivating through Play instead of Manipulating through Re.