7 Tips For Designing On A Budget. In the U.S. alone, sales by small businesses account for 54% of the country’s total sales and provide 55% of all jobs, according to the U.S. 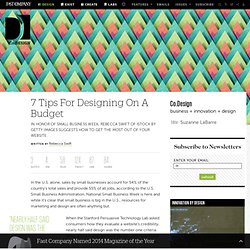 Small Business Administration. National Small Business Week is here and while it’s clear that small business is big in the U.S., resources for marketing and design are often anything but. When the Stanford Persuasive Technology Lab asked consumers how they evaluate a website’s credibility, nearly half said design was the number one criteria. While social media and web design tools have made it easier for small businesses to take a DIY approach, owners and managers shouldn’t forget that their website is typically a customer’s first impression of their company--and it must be a good one.

How Do You Know When A Design Is Really Done? David Fincher did 99 takes of the first scene in The Social Network. James Dyson made 5,127 vacuum-cleaner prototypes. Meanwhile, Paula Scher sketched out what became the Citi logo on a napkin on the first try. How do you know when a design is done--neither over-analyzed nor too facile? It's a question that doesn't just apply to product designers, as our latest advice-seeking reader knows: "When you're making something (whether it's a family Christmas card or a consumer product), how do you know when you've done enough testing? The DfX concept. The meaning of the X in DfX The electronics industry strives to meet four criteria when developing new products: quality, cost, performance and delivery. 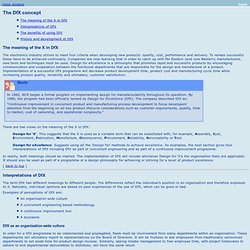 To remain successful these have to be achieved continually. Companies are now realising that in order to catch up with Far Eastern (and now Western) manufacturers, new tools and techniques must be used. Design for eXcellence is a philosophy that promotes rapid and successful products by encouraging communication and cooperation between the functional departments that are responsible for the design and manufacture of a product. Implementation of a successful DfX programme will decrease product development time, product cost and manufacturing cycle time while increasing product quality, reliability and ultimately, customer satisfaction. Engineering Design: Systematic Approach - G. Pahl, W. Beitz, Ken Wallace. 2001 - Biomedical Engineering Design in the New Millenniumimplications for Biomedical Engineering design efforts and plans. .... 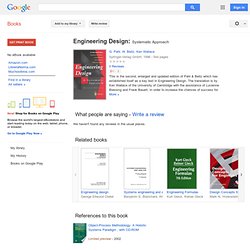 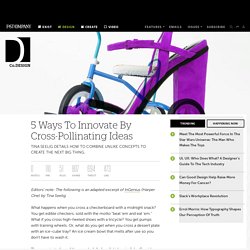 What happens when you cross a checkerboard with a midnight snack? You get edible checkers, sold with the motto "beat ’em and eat ’em. "

Ezio manzini. Sketching. Storytelling. 4 Ways To Amplify Your Creativity. The holidays are over, the weather is lousy, and we’re sober again. 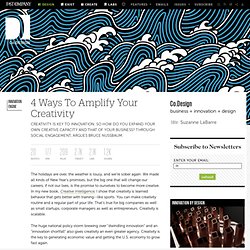 We made all kinds of New Year’s promises, but the big one that will change our careers, if not our lives, is the promise to ourselves to become more creative. In my new book, Creative Intelligence, I show that creativity is learned behavior that gets better with training--like sports.

The Story Behind the Sony Walkman. The world took a big step towards the iPod generation when Sony introduced the Walkman in 1979. 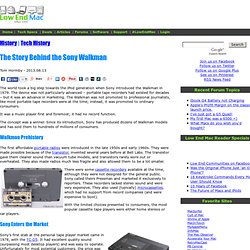 The device was not particularly advanced – portable tape recorders had existed for decades – but it was an advance in marketing. The Walkman was not promoted to professional journalists, like most portable tape recorders were at the time; instead, it was promoted to ordinary consumers. It was a music player first and foremost; it had no record function. The concept was a winner. Kozo Ohsone. The Walkman Kozo Ohsone (大曽根 幸三? 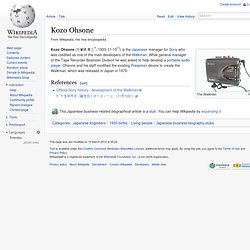 , 1933-11-10[1]) is the Japanese manager for Sony who was credited as one of the main developers of the Walkman. While general manager of the Tape Recorder Business Division he was asked to help develop a portable audio player. Ohsone and his staff modified the existing Pressman device to create the Walkman, which was released in Japan in 1979. Official Sony history - development of the Walkman. Unfold on Behance. Home. The Four Paradoxes of Great Performance. We each long for certainty – the security of simple answers. 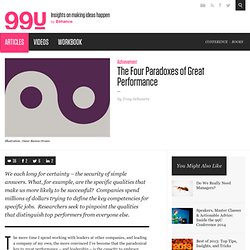 What, for example, are the specific qualities that make us more likely to be successful? Companies spend millions of dollars trying to define the key competencies for specific jobs. Researchers seek to pinpoint the qualities that distinguish top performers from everyone else. The more time I spend working with leaders at other companies, and leading a company of my own, the more convinced I’ve become that the paradoxical key to great performance – and leadership – is the capacity to embrace opposites.Stoic philosophers referred to this as the mutual entailment of the virtues. No virtue, they argued, is a virtue by itself. Exobrain. Personas.