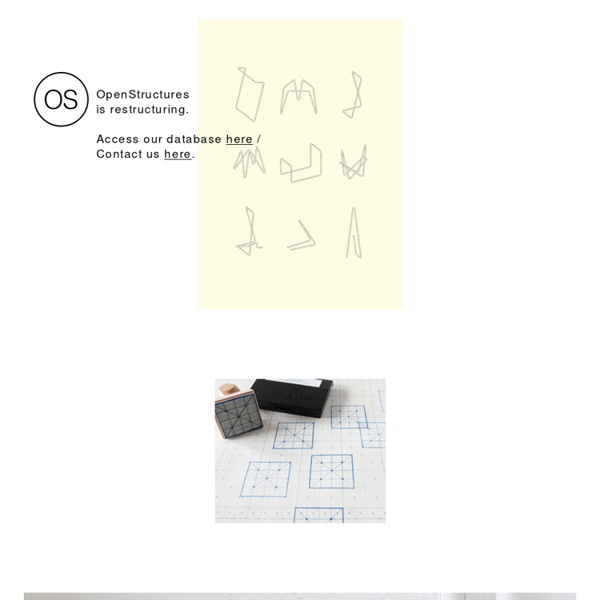 Clerkenwell Design Week 2012 photo © Ben Webb >> photographs & text by Ben Webb for Yatzer.com On the 22d May 2012, the gates to the infamous Farmiloe building (34 St John St London EC1M 4BE Area: Farringdon) opened once again in order to host Clerkenwell Design Week, London, UK (22-24 May 2012). Featured in films such as The Dark Knight and Eastern Promises, the Farmiloe boasts an ideal utilitarian backdrop for this contemporary design fair.

The Four Paradoxes of Great Performance We each long for certainty – the security of simple answers. What, for example, are the specific qualities that make us more likely to be successful? Companies spend millions of dollars trying to define the key competencies for specific jobs. Researchers seek to pinpoint the qualities that distinguish top performers from everyone else. Using the design process In engineering, programming, web design and most other creative work, many people consciously use The Design Process. The PBS show Design Squad provides some great examples of how people can work with this system. There are also plenty of resources for working with students and other learners on their site. The Android G1 is pretty much ready for the public to use, but it is still not done. One of the reasons I wanted the G1 was to follow the process of developing a product from initial release.

How to Make Everything Ourselves: Open Modular Hardware A modular system unites the advantages of standardisation (as parts can be produced cheaply in large amounts) with the advantages of customisation (since a large diversity of unique objects can be made with relatively few parts). Modularity can be found to a greater or lesser extent in many products (like bicycles and computers) and systems (like trains and logistics), but the best examples of modular systems are toys: LEGO, Meccano, and Erector (which is now the brand name of Meccano in the US). LEGO, Meccano and Erector are composed of relatively few elementary building blocks, which can be used to build various objects. The parts can then be disassembled and re-used to build something completely different. Apart from the elementary buildings blocks, these manufacturers have produced many more specific building blocks, which are less versatile, but further increase customisation possibilities.

Tidemark's Infographics Could Change How Your Business Is Run It’s only been a few months since Tidemark, a bold Andreessen Horowitz-backed business analytics platform, emerged from its beta cocoon. But today, the fledgling company is introducing a new set of tools, aimed at helping businesses visualize their data in real time. “Business reporting is broken, stagnated decades ago, built upon stacks of dense, complex, and dated reports and dashboards that few people ever read,“ explains Founder and CEO Christian Gheorghe. "Data is nothing without context." The new feature--called Storylines--supplies visual context with a dynamic mobile interface.

Kozo Ohsone The Walkman Kozo Ohsone (大曽根 幸三?, 1933-11-10[1]) is the Japanese manager for Sony who was credited as one of the main developers of the Walkman. While general manager of the Tape Recorder Business Division he was asked to help develop a portable audio player. Passionate about communities It's time to write history with CMNTY Story. Revolutionize the way you see your community. CMNTY Platform 2.4 The most advanced community platform available. Video introduction to CMNTY. Meet the products and the team behind it. 31 How to Sites Must Check Home » How to » 31 Best How To Sites To Learn Everything You Need To Know In Internet you can find lots of site which helps you to learn lots of thing that we use in our daily life. But the question is where to find it and and how to learn lots of thing and guides free. In our daily life we are doing lots of thing such as using computer, learning web design and more and more. If you’re looking for information on How to repair a hard drive, How to Clean PC, How to Design Website, how to use web services, how to make videosor any other questions, you’ll find it in my picks for the best how to sites on the Web. Yes you can also use Google, Yahoo, or Bing to search how to articles, tips and guides, but with these list you can find all the latest tutorial guides and tips at one place no need to search any other place.

Infographic: The Amazing Evolution Of Video Game Controllers Like the games we play with them, video game controllers have grown more complex throughout the years. They’ve become more ergonomic, and their buttons have multiplied. They’ve incorporated new technologies, like haptic feedback and touch screens. And most recently, in some cases, they’ve started disappearing entirely, with buttons being replaced by the movement of our own bodies tracked by sophisticated motion sensors.

The Story Behind the Sony Walkman The world took a big step towards the iPod generation when Sony introduced the Walkman in 1979. The device was not particularly advanced – portable tape recorders had existed for decades – but it was an advance in marketing. The Walkman was not promoted to professional journalists, like most portable tape recorders were at the time; instead, it was promoted to ordinary consumers. Restore Your USB Key to it's original state After having tooled around with a USB Linux version using your image overwritten or multi partitioned flash pen drive, you might find it necessary to revert it back to a single fat partition (restore the flash pen drive to its original state) that can again be read by all computers. Windows users can follow the Windows instructions below to Restore a Flash Drive using the HP USB Format Tool. For those working from Linux this task can easily be accomplished via the Linux Flash Drive Restoration tutorial that follows. Restoring your USB key to its original state using Windows/Mac OS: Windows and or Mac OS users could use the SD Formatter Tool to reformat and restore a USB Drive.