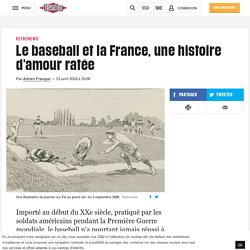 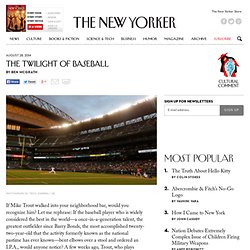 Let me rephrase: If the baseball player who is widely considered the best in the world—a once-in-a-generation talent, the greatest outfielder since Barry Bonds, the most accomplished twenty-two-year-old that the activity formerly known as the national pastime has ever known—bent elbows over a stool and ordered an I.P.A., would anyone notice? A few weeks ago, Trout, who plays center field for the Angels, hit a ball nearly five hundred feet. At the All-Star Game, he was clocked at twenty miles per hour—rounding the bases, on foot. Yet his Q rating is about on par with that of Jim, the guy in South Jersey whose burgers Trout’s mother sometimes mails, frozen, to her superhuman son in Anaheim, to keep him rooted in the tastes and comforts of home. 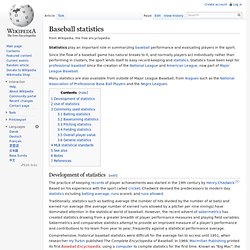 Since the flow of a baseball game has natural breaks to it, and normally players act individually rather than performing in clusters, the sport lends itself to easy record-keeping and statistics. Statistics have been kept for professional baseball since the creation of the National League and American League, now part of Major League Baseball. Many statistics are also available from outside of Major League Baseball, from leagues such as the National Association of Professional Base Ball Players and the Negro Leagues. Development of statistics[edit] Traditionally, statistics such as batting average (the number of hits divided by the number of at bats) and earned run average (the average number of earned runs allowed by a pitcher per nine innings) have dominated attention in the statistical world of baseball.

Use of statistics[edit] Commonly used statistics[edit] Infield fly rule. The infield fly rule is a rule in baseball intended to prevent infielders from intentionally dropping a pop-up or allowing it to fall to turn a double play (or triple play). Without this rule, a defense could easily turn a pop fly into a double or triple play when there are fewer than two outs with runners at first and second base or when the bases are loaded. If the runners stay near their bases to tag up, the defense could let the ball drop, throw to third base and then to second (or home to third or home to third to second), for a force-out at each base. If any of the runners stray too far from their bases, the defense could catch the pop-up and double-off any runner that failed to tag up. When the ball is in the air and the umpire signals that he is invoking the rule, the batter is out (and all force plays removed) regardless of whether the ball is caught.

The rule[edit] An infield fly may be declared by any umpire on the field. "Umpire's judgment"[edit] "Ordinary effort"[edit] Notes. Spitting: A Tough Baseball Tradition to Shake. It's traditional. 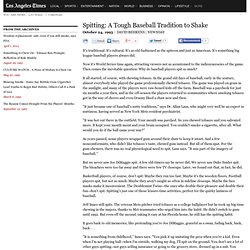 It's cultural. It's as old-fashioned as the spitoon and just as American. It's something big league baseball players always did. Now it's World Series time again, attracting viewers not as accustomed to the indiosyncracies of the game. Then comes the inevitable question: Why do baseball players spit so much? It all started, of course, with chewing tobacco.

"It just became one of baseball's nutty traditions," says Dr. "It was hot out there in the outfield. As years passed, some players wrapped gum around their chaw to keep it intact. But we never saw Joe DiMaggio spit. Basketball players, of course, don't spit: Maybe they run too fast. Jeff Innes still spits. Up Close on Baseball’s Borders.