Behind the Gare Saint Lazare, 1932 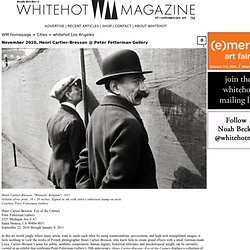 Cartier-Bresson’s sense for subtle, aesthetic composition, human dignity, historical relevance and psychological insight can be currently viewed in an exhibit that celebrates Peter Fetterman Gallery’s 20th anniversary. The picture of children and women in Aquila Degli Abruzzi in central Italy is here too. MY TIME WITH HENRI CARTIER-BRESSON. AFTER GRADUATING IN 1963 from the Faculty of Fine Arts, University of Baroda, India I was lucky enough to be selected by Gira Sarabhai to train as an “apprentice” at the newly formed National Institute of Design in Ahmedabad, India. 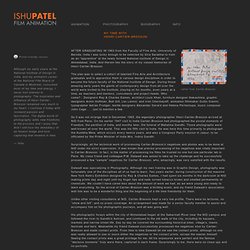 And therein lies the story of my valued memories of Henri Cartier-Bresson. The plan was to select a cohort of talented Fine Arts and Architecture graduates and to apprentice them in various design disciplines in order to become the future faculty of the National Institute of Design. During those amazing early years the giants of contemporary design from all over the world were invited to the Institute, staying on for months, even years at a time, as teachers and mentors, consultants and project heads. Street Photography Composition Lesson #3: Diagonals. For today’s street photography composition lesson, we will discuss a compositional rule that is simple enough: the diagonal. 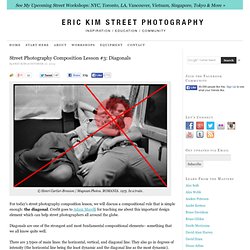 Credit goes to Adam Marelli for teaching me about this important design element which can help street photographers all around the globe. Diagonals are one of the strongest and most fundamental compositional elements– something that we all know quite well. There are 3 types of main lines: the horizontal, vertical, and diagonal line.

They also go in degrees of intensity (the horizontal line being the least dynamic and the diagonal line as the most dynamic). Famous, Infamous and Iconic Photos. Henri Cartier-Bresson Quotes (Author of The Mind's Eye) Henri Cartier-Bresson - A French Photographer - The Father of Modern Photojournalism - Photography Quotes. Bresson. There are giants in this world. 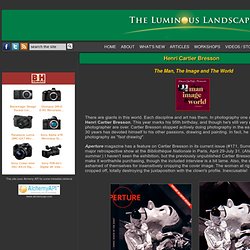 Each discipline and art has them. In photography one of the towering names is Henri Cartier Bresson. This year marks his 95th birthday, and though he's still very much alive his days are a photographer are over. Cartier Bresson stopped actively doing photography in the early 1970's and for the past 30 years has devoted himself to his other passions, drawing and painting.

In fact, he is quoted as describing photography as "fast drawing". Aperture magazine has a feature on Cartier Bresson in its current issue (#171, Summer - 2003) and there is a major retrospective show at the Bibliothèque Nationale in Paris, April 29-July 31. . © Henri Cartier Bresson The Book Of greater interest to anyone who admires, or indeed loves this man's work there is the just published The Man: The Image and The World — A Retrospective, from publisher Thames and Hudson. . © Henri Cartier Bresson In terms of presentation the reproductions are first rate Duotones. The Decisive Moment. The F-Stops Here - Street photography: crop or crap? HCB Never Cropped His Photos – Except He Did. 10 Things Henri Cartier-Bresson Can Teach You About Street Photography. Don’t forget to pre-order the new re-print of “The Decisive Moment” by Henri Cartier-Bresson! 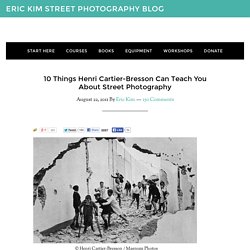 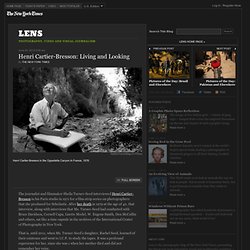 After her death in 1979 at the age of 42, that interview, along with interviews that Ms. Turner-Seed had conducted with Bruce Davidson, Cornell Capa, Lisette Model, W. Eugene Smith, Don McCullin and others, sat like a time capsule in the archives of the International Center of Photography in New York. That is, until 2011, when Ms. Turner-Seed’s daughter, Rachel Seed, learned of their existence and went to I.C.P. to study the tapes. Ms. The following interview was transcribed from tape by Sheila Turner-Seed and has been lightly edited. 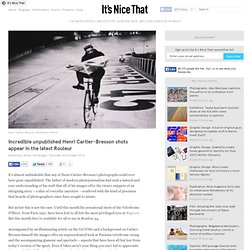 The father of modern photojournalism had such a natural and easy understanding of his craft that all of his images offer the viewer snippets of an intriguing story – a slice of everyday narrative – rendered with the kind of precision that hoards of photographers since have sought to mimic. But in fact this is not the case. Until this month his sensational shots of the Vélodrome D’Hiver, from Paris 1957, have been lost to all but the most privileged eyes at Magnum. But this month they’re available for all to see in Rouleur 34. Accompanied by an illuminating article on the Vél D’Hiv and a background on Cartier-Bresson himself the images offer an unprecedented look at Parisian velodrome racing and the accompanying glamour and spectacle – aspects that have been all but lost from today’s version of the sport. 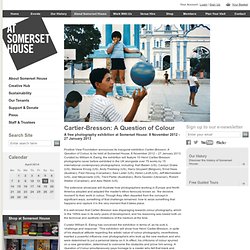 The extensive showcase will illustrate how photographers working in Europe and North America adopted and adapted the master's ethos famously known as ‘the decisive moment' to their work in colour. Ends Information: Sunday Salon » Henri Cartier-Bresson – the portraits. This is going to be a slightly unusual Sunday Salon. 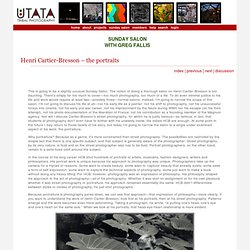 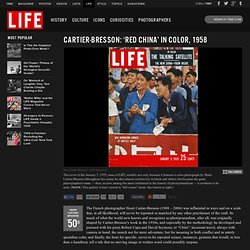 So much of what the world now knows and recognizes as photojournalism, after all, was originally shaped by Cartier-Bresson’s work in the 1930s, and especially by the methodology he developed and pursued with his peers Robert Capa and David Seymour, or “Chim”: incessant travel, always with camera in hand; the search not for mere adventure, but for meaning in both conflict and in utterly quotidian calm; and finally, the hunt for specific, never-to-be repeated scenes, instances, gestures that would, in less than a heartbeat, tell a tale that no moving image or written word could possibly surpass.

But have you ever wondered what Cartier-Bresson could teach you, to help you reflect on your own work and become a better photographer? I was checking out a book of his images the other day and began wondering what some of these lessons might be. And what if the action is in the middle of a war zone? 1. “The world is going to pieces and people like Adams and Weston are photographing rocks!”

“Henri Cartier-Bresson – Famous Photographers Tell How” (1958. Interview with Henri Cartier-Bresson – Famous Photographers Tell How (1958) HCB: To me, photography is a simultaneous recognition in a fraction of a second of a significance of an event as well as of a precise organization of form which gives that event its proper expression. I believe that, for reactive living, the discovery of oneself is made concurrently with the discovery of the world around us, which can mold us, but which can also be affected by us.

A balance must be established between these two worlds: the one inside us, and the one outside us. As the result of a constant reciprocal process, both these worlds come to form a single one. And it is this world that we must communicate. But this takes care only of a content of a picture. First I would like to say that it is only a rule I established in myself, a certain discipline, but it is not a school, it’s not a.. it’s very personal. Photography is in a way a mental process. Madrid, 1933 Volcano of Popocatepetl, Mexico, 1964. Henri Cartier-Bresson. Henri Cartier-Bresson and Street Photography. French photographer Henri Cartier-Bresson, the father of modern photojournalism, has inspired plenty of photographers.

His raw images capture the emotions of his subjects and his photo compositions are phenomenal. Read more about Henri Cartier-Bresson and his street photography. Henri Cartier-Bresson was a photographer who started out as a painter. Because of his interest in capturing intimate moments in the lives of people around him, he got into street photography. Most of the photos that he takes are of big events, wars, clashes in society, and other interesting subjects.