Edward Snowden warns about loss of privacy in Christmas message - video. Edward Snowden to broadcast Channel 4's alternative Christmas Day message. Edward Snowden, the whistleblower who prompted a worldwide debate when he leaked a cache of top secret documents about US and UK spying, has recorded a Christmas Day television message in which he calls for an end to the mass surveillance revealed by his disclosures. 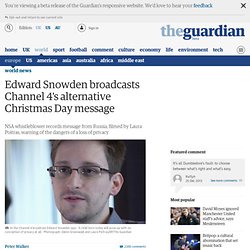 The short film was recorded for Channel 4, which has 20-year history of providing unusual but relevant figures as an alternative to the Queen's Christmas message shown by other UK broadcasters. It will be Snowden's first television appearance since arriving in Moscow. Edward Snowden revelations prompt UN investigation into surveillance. The UN's senior counter-terrorism official is to launch an investigation into the surveillance powers of American and British intelligence agencies following Edward Snowden's revelations that they are using secret programmes to store and analyse billions of emails, phone calls and text messages. 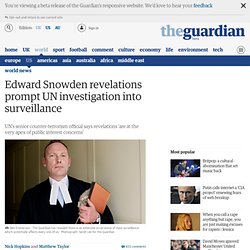 The UN special rapporteur Ben Emmerson QC said his inquiry would also seek to establish whether the British parliament had been misled about the capabilities of Britain's eavesdropping headquarters, GCHQ, and whether the current system of oversight and scrutiny was strong enough to meet United Nations standards. The inquiry will make a series of recommendations to the UN general assembly next year. In an article for the Guardian, Emmerson said Snowden had disclosed "issues at the very apex of public interest concerns". NSA files decoded: Edward Snowden's surveillance revelations explained. Greenwald Exits 'Guardian' Wednesday Updates: Pierre Omidyar just out with his own statement. 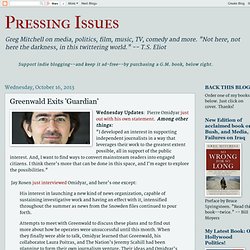 Among other things: "I developed an interest in supporting independent journalists in a way that leverages their work to the greatest extent possible, all in support of the public interest. And, I want to find ways to convert mainstream readers into engaged citizens. I think there’s more that can be done in this space, and I’m eager to explore the possibilities. " Jay Rosen just interviewed Omidyar, and here's one except: His interest in launching a new kind of news organization, capable of sustaining investigative work and having an effect with it, intensified throughout the summer as news from the Snowden files continued to pour forth. Attempts to meet with Greenwald to discuss these plans and to find out more about how he operates were unsuccessful until this month. At the core of Newco will be a different plan for how to build a large news organization. Lucian J. Hudson, Director of Communications, The Open University – personal blog.

Two things happened this week: it is a safe bet that Sir David Omand will be elevated to the House of Lords within the next year, and his intervention in the Snowden row reveals just how concerned the powers-that-be are that support for Snowden could prove corrosive. 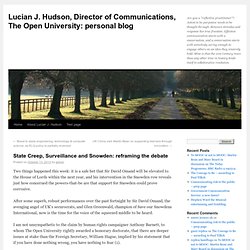 After some superb, robust performances over the past fortnight by Sir David Omand, the avenging angel of UK’s securocrats, and Glen Greenwald, champion of Save our Snowdens International, now is the time for the voice of the squeezed middle to be heard. I am not unsympathetic to the claim by human rights campaigner Anthony Barnett, to whom The Open University rightly awarded a honorary doctorate, that there are deeper issues at stake than the Foreign Secretary, William Hague, implied by his statement that if you have done nothing wrong, you have nothing to fear (1). 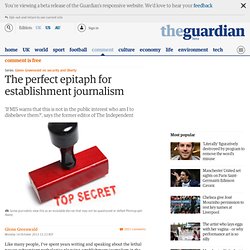 But this morning, I feel a bit like all of that was wasted time and energy, because this new column by career British journalist Chris Blackhurst - an executive with and, until a few months ago, the editor of the UK daily calling itself "The Independent" - contains a headline that says everything that needs to be said about the sickly state of establishment journalism: In other words, if the government tells me I shouldn't publish something, who am I as a journalist to disobey? The Banality of Systemic Evil. The Stone is a forum for contemporary philosophers and other thinkers on issues both timely and timeless. 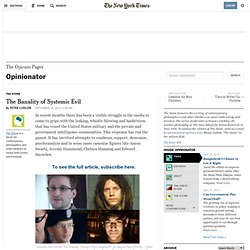 In recent months there has been a visible struggle in the media to come to grips with the leaking, whistle-blowing and hacktivism that has vexed the United States military and the private and government intelligence communities. This response has run the gamut. It has involved attempts to condemn, support, demonize, psychoanalyze and in some cases canonize figures like Aaron Swartz, Jeremy Hammond, Chelsea Manning and Edward Snowden.

In broad terms, commentators in the mainstream and corporate media have tended to assume that all of these actors needed to be brought to justice, while independent players on the Internet and elsewhere have been much more supportive. So has the younger generation lost its moral compass? No. Clearly, there is a moral principle at work in the actions of the leakers, whistle-blowers and hacktivists and those who support them. Manning could not play along. NSA surveillance: The US is behaving like China. Even though we know governments do all kinds of things I was shocked by the information about the US surveillance operation, Prism. 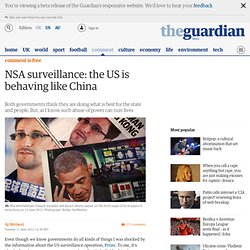 To me, it's abusively using government powers to interfere in individuals' privacy. This is an important moment for international society to reconsider and protect individual rights. I lived in the United States for 12 years. This abuse of state power goes totally against my understanding of what it means to be a civilised society, and it will be shocking for me if American citizens allow this to continue. The US has a great tradition of individualism and privacy and has long been a centre for free thinking and creativity as a result. In our experience in China, basically there is no privacy at all – that is why China is far behind the world in important respects: even though it has become so rich, it trails behind in terms of passion, imagination and creativity.

But still, if we talk about abusive interference in individuals' rights, Prism does the same. Edward Snowden: An A-Z of surveillance. The Snowden files: why the British public should be worried about GCHQ. In August, the editor of the Guardian rang me up and asked if I would spend a week in New York, reading the GCHQ files whose UK copy the Guardian was forced to destroy. 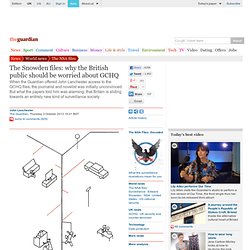 His suggestion was that it might be worthwhile to look at the material not from a perspective of making news but from that of a novelist with an interest in the way we live now. I took Alan Rusbridger up on his invitation, after an initial reluctance that was based on two main reasons. The first of them was that I don't share the instinctive sense felt by many on the left that it is always wrong for states to have secrets. I'd put it more strongly than that: democratic states need spies. The philosopher Karl Popper, observing the second world war from his academic post in New Zealand, came up with a great title for his major work of political thought: The Open Society and Its Enemies. I get all that. Reassuring read Problems and risks Access all areas This process is not without supervision, of course. British reaction. American surveillance: The Snowden effect.