Pamela Geller: America's 'bigoted blogger'? - BBC News. From an unknown blogger in the months following the 9/11 attacks, Pamela Geller has become one of the most outspoken US critics of Islam. 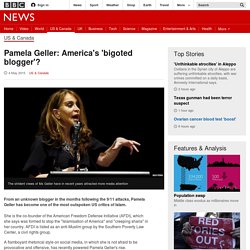 She is the co-founder of the American Freedom Defense Initiative (AFDI), which she says was formed to stop the "Islamisation of America" and "creeping sharia" in her country. AFDI is listed as an anti-Muslim group by the Southern Poverty Law Center, a civil rights group. A flamboyant rhetorical style on social media, in which she is not afraid to be provocative and offensive, has recently powered Pamela Geller's rise. In May 2015, Ms Geller played a key role in organising a conference on cartoons of the Prophet Muhammad in a suburb of Dallas, where two gunmen were shot dead after opening fire outside the venue. If you don’t speak French, how can you judge if Charlie Hebdo is racist? I’m the Irish guy who writes for Charlie Hebdo. 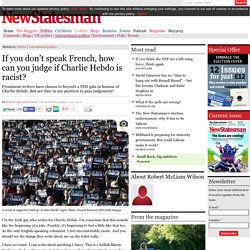 I’m conscious that this sounds like the beginning of a joke. Frankly, it’s beginning to feel a little like that too. As the only English-speaking columnist, I feel uncomfortably exotic. ‘Charlie Hebdo’ Deserves Its Award for Courage in Free Expression. Here’s Why. Share When PEN decided to award the first PEN/Toni and James C. 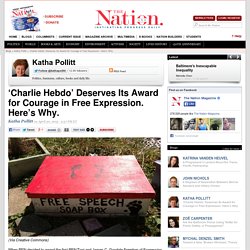 Goodale Freedom of Expression Courage Award to the French satirical magazine Charlie Hebdo, they surely thought they were honoring bravery in defense of free speech. This was a magazine that kept publishing after its offices were firebombed by Islamists in 2011, and kept publishing after nine staffers were horribly murdered by Islamists in January. Compare that to, say, Yale University Press, which dropped the illustrations for Jytte Clausen’s book about the Danish Mohammed cartoons after the book’s first printing, or Random House, which canceled publication of Sherry Jones’s The Jewel of Medina, a historical novel about Mohammed’s wife Aisha.

Both publishing houses cited fears of violence by Muslim extremists. Economia » The expanding empire of offence. I see that The Nation magazine and The New Statesman have published stirring defences of Charlie Hebdo, the French satirical newspaper whose murdered staff are currently being libelled as racist by Anglophone commentators. 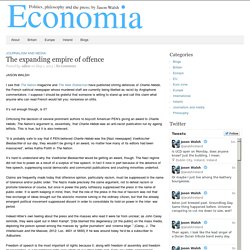 I suppose I should be grateful that someone is willing to stand up and call this claim what anyone who can read French would tell you: nonsense on stilts. It’s not enough though, is it? BBC Three - A Nation Divided? The Charlie Hebdo Aftermath. Queen's University: Charlie Hebdo event off due to lack of risk assessment - BBC News. Queen's University has said an event on the fallout from the Charlie Hebdo murders in France was cancelled as no risk assessment had been completed. 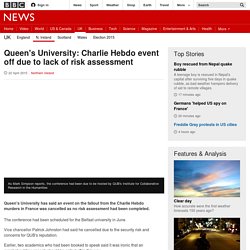 The conference had been scheduled for the Belfast university in June. Vice chancellor Patrick Johnston had said he cancelled due to the security risk and concerns for QUB's reputation. Earlier, two academics who had been booked to speak said it was ironic that an event about free speech should be called off in this way. Queen’s University conference on Charlie Hebdo ‘cancelled’ A conference about the satirical French publication Charlie Hebdo that was set to take place at Queen’s University Belfast has allegedly been cancelled because of a potential security risk. 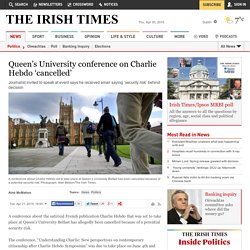 The conference, “Understanding Charlie: New perspectives on contemporary citizenship after Charlie Hebdo Symposium” was due to take place on June 4th and 5th. Jason Walsh, a journalist and academic who was due to speak at the conference said he received an email on Monday which said the event was cancelled on the grounds of a “security risk” . “I’m actually from Belfast, so I find the idea of security risk somewhat puzzling,” Mr Walsh said. Charlie Hebdo: Craven Queen University's needs a lesson in free speech. 01 of 50 By Fionola Meredith – 24 April 2015 Queen's should spend less time thinking about vacuous ways of branding and selling itself, and a lot more time thinking about the fundamental nature of a university, and what it's there to do. 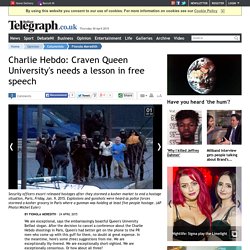 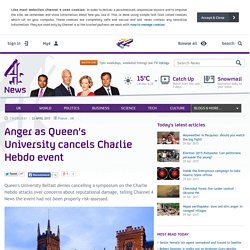 But it has insisted that its only concern was for health and safety, telling Channel 4 News that the event's organisers had failed to file the requisite risk assessment. The spokesman said there was no issue related to "academic freedom". The conference organisers should be supported in their attempts to discuss this issue, with extra security if necessaryAngela Nagle, academic The spokesman said: "As part of managing the health and safety of the institution, it is a requirement for all major events to have a full risk assessment completed prior to them going ahead on the campus.

Belfast 'shamed' after university cancels Charlie Hebdo conference. An award-winning novelist has said he is ashamed of his native city because of the decision by Queen’s University Belfast to cancel an academic conference on the Charlie Hebdo massacre for security reasons. 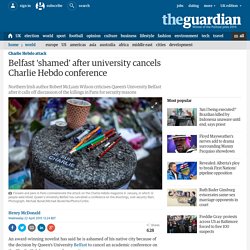 Robert McLiam Wilson, the Paris-based author of Ripley Bogle and Eureka Street, described the cancellation of the event in the face of an unspecified security threat as “not cowardice or surrender. It is part of a long defeat in an unfought war.” McLiam Wilson, who writes for the French satirical magazine, said he could not believe that a city like Belfast that had endured decades of violence would call off the conference. 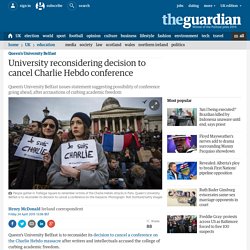 The conference on the implications of the attack on the French satirical magazine had been scheduled to take place in June. It was cancelled earlier this month. But in a statement issued late on Thursday Queen’s appeared to hold out the possibility that that decision might be reversed. Pro Patrick Johnston, the university’s vice-chancellor, said: “Queen’s is, and will remain, a place where difficult issues can be discussed. “In line with due process, the university has commissioned a full risk-assessment. Times Higher Education. I deplore the decision by Queen’s University Belfast to cancel the international conference “Understanding Charlie: New perspectives on contemporary citizenship after Charlie Hebdo” (“Charlie Hebdo academic conference ‘cancelled’”, 22 April), even though managers now say that they are reviewing the basis for the decision, which might allow the event to proceed.

In halting the event, Patrick Johnston, the vice-chancellor of Queen’s, reportedly cited concerns about the security of the delegates and the reputation of the university. As an invited speaker, I was especially surprised at this, because Queen’s has previously hosted events to discuss conflict, religion and the Troubles. French Muslims, Never Fully at Home. After the terrorist attacks last month on the offices of Charlie Hebdo and a kosher supermarket, the airwaves and the web were filled with vitriol toward French Muslims. Many demanded that they condemn the violence, which most Muslim organizations and public figures did. But far right-wing commentators in France and beyond attacked Islam itself, insisting that the religion was inherently violent. Luz : "All eyes are on us, we’ve become a symbol"

Luz has been a cartoonist at Charlie Hebdo for twenty years. He is alive today because January 7th marks his birthday and he was running late for the satirical paper’s weekly editorial meeting. On Charlie Hebdo: A letter to my British friends. Dear friends, Three days ago, a horrid assault was perpetrated against the French weekly Charlie Hebdo, who had published caricatures of Mohamed, by men who screamed that they had “avenged the prophet”. A wave of compassion followed but apparently died shortly afterward and all sorts of criticism started pouring down the web against Charlie Hebdo, who was described as islamophobic, racist and even sexist. Countless other comments stated that Muslims were being ostracized and finger-pointed. The Limits of Republicanism. A few days after the horrific attacks that left seventeen dead in the offices of Charlie Hebdo, in a kosher supermarket, and in the streets of Paris, the prime minister of France, Manuel Valls, declared war on “terrorism, jihadism, and radical Islam.”

As he explained in an impassioned speech to the National Assembly on January 13, this was a war that would be fought on three fronts: internationally, by bolstering France’s participation in the “global war on terror,” especially in Mali and Iraq; nationally, by reinforcing the security and surveillance arsenals in an effort to track down potential radicals especially on the Internet, in schools, and in jails; and ideologically, by upholding, now more than ever, “the Republic and its values.”

Why I am not Charlie. There is no “but” about what happened at Charlie Hebdo yesterday. Some people published some cartoons, and some other people killed them for it. Words and pictures can be beautiful or vile, pleasing or enraging, inspiring or offensive; but they exist on a different plane from physical violence, whether you want to call that plane spirit or imagination or culture, and to meet them with violence is an offense against the spirit and imagination and culture that distinguish humans. Nothing mitigates this monstrosity.

There will be time to analyze why the killers did it, time to parse their backgrounds, their ideologies, their beliefs, time for sociologists and psychologists to add to understanding. Charlie Hebdo: how journalism needs to respond to this unconscionable attack. The killings at the satirical magazine Charlie Hebdo highlight the threat to media workers in a world where free expression faces many violent threats. But they provide no excuse for hateful rejoinders. After a prior controversy in 2012, the magazine responded with humorous alternative front covers. Demotix / Davide del Guidice. All rights reserved. Danish cartoonist: Charlie Hebdo attack will lead to self-censorship by BBC World Service Radio. Charlie Hebdo: The French satirical magazine is heroic. It is also racist. Explosions After Kouachi Brothers’ Siege - Video. Hostages Flee Kosher Store in Paris - Video.

Hollande Pledges to Defend Freedom - Video. In Paris, Solidarity Against Terrorism - Video. No, we are NOT all Charlie (and that’s a problem) In Memoriam Charlie Hebdo, Emmeline Broussard/Flickr. Some rights reservedThe tragic terrorist attack at the French satirist magazine Charlie Hebdo in Paris, killing ten journalists and two policemen, is frightening at many levels. Provocative Books Tap a Mood of Profound French Anxiety. Marine Le Pen and the National Front on the rise: France’s far right party will be even more popular after the Charlie Hebdo attack. Photo by Kenzo Tribouillard/AFP/Getty Images. Charlie Hebdo and Islam: What that radical cleric in USA Today gets wrong about blasphemy in the Muslim faith. Photo by David McNew/Getty Images.