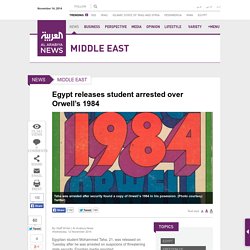 Taha was arrested in front of his university on Sunday after security found writings about a “Muslim caliphate” among his notes, in addition to a copy of George Orwell’s 1984. The notes allegedly spoke of a “corrupt military regime and its dictatorial reign over the country.” Speaking to the Egyptian daily al-Masry al-Youm, Mahmoud Farouq, the fdirector of Giza’s state security bureau said Taha was arrested while taking pictures of the Central Security Forces around the university. The Egyptian Homeland Security and the Giza State Security interrogated Taha and was later released without charges due to a lack of evidence against him. Gen. Gen. Last Update: Wednesday, 12 November 2014 KSA 07:45 - GMT 04:45 By Staff Writer | Al Arabiya News Wednesday, 12 November 2014 Gen. Gen. Student arrested for carrying George Orwell's novel 1984. Security services arrested a student in front of the main gate of Cairo University for carrying George Orwell's novel 1984, which tackles corruption and dictatorial military regimes. 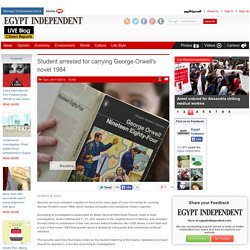 According to investigations supervised by Major General Mahmoud Farouk, head of Giza investigators, student Mohamed T., 21, who resides in the neighborhood of Warraq, was arrested Sunday while in possession of two cell phones without batteries, two USB drives, a hard disk and a copy of the novel 1984 that speaks about a dictatorial ruling party that criminalizes political rebellion. The security says they found also notes on the student referring to the Islamic caliphate and how it should be applied in a country, according to investigations. Edited translation from Al-Masry Al-Youm. 1984 Symposium: Jura (with images) · johnperivolaris. Audioboo. 1984 Symposium: Jura (with images) · johnperivolaris. After a walk of four miles Barnhill appears below at a bend of the path, overlooking its own natural harbour out of which Eric Arthur Blair would strike out in his motor boat, rounding the north of the island to camp on the west coast of Jura. 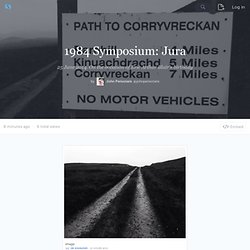 On one occasion he lost his outboard motor, nearly drowning in the whirlpool of Corryvreckan, whose waters the Admiralty deems unnavigable. Audioboo. Embed Code. 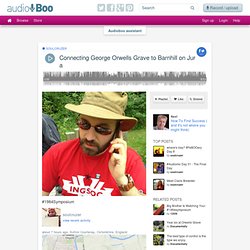 The Rest Is Silence 6. The Picnic is a Political Act. On June the 25th 2014, it will be the seventh continual year there has been a symposium (picnic) at George Orwell’s grave. 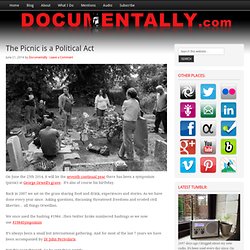 It’s also of course his birthday. Back in 2007 we sat on the grass sharing food and drink, experiences and stories. As we have done every year since. Asking questions, discussing threatened freedoms and eroded civil liberties… all things Orwellian. We once used the hashtag #1984 ..then twitter broke numbered hashtags so we now use #1984Symposium It’s always been a small but international gathering. Not this year through. Coca-Cola Security Camera Ad Encourages Viewers To 'Look At The World A Little Differently' Security cameras capture more than just burglaries, brawls and automobile accidents. 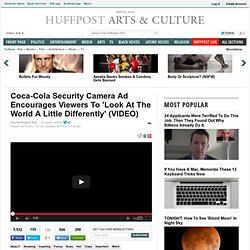 They also capture sweet, everyday moments of people just being, well, people. It's those feel good moments Coca-Cola highlights in a new video advertisement that urges viewers to "look at the world a little differently. " Set to the song "Give A Little Bit," the clip features security camera footage from around the world showing people kissing, dancing, helping the homeless, saving others and, yes, sharing a Coke. A representative from Coca-Cola Latin America explained the spot is meant to elicit those warm, fuzzy feelings. “We want to remind people that acts of kindness and bravery are taking place around them all the time,” Guido Rosales told Media Bistro's Agency Spy. And though some viral ads get a bit corny, CBS' William Goodman admits the clip was a "total feel-good video that actually had this blogger smiling.

" The Moral Compass of Millennials » Citings and Sightings.

1984 Looks Like This. John Perivolaris and christian Payne photographed by David Dunnico On the 2nd of May this year I took a walk from Manchester into Salford with Dr John Perivolaris. 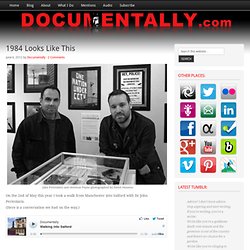 (Here is a conversation we had on the way.) We were heading to see David Dunnico’s Exhibition entitled ‘1984 Looks Like This‘ currently showing at Salford Museum and Art Gallery until the 1st of July. I first met Manchester based David Dunnico at a talk I participated in entitled ‘Photography and Security’ organised by the RedEye network. For a while now, David has been documenting both the spread of CCTV cameras and the related signage that go with them. Orwell’s prophetic tale written in 1949 has been translated into dozens of languages in hundreds of editions. Big Brother's head flanked by CCTV domes The current reality has people in the West less worried about state surveillance but more concerned regarding the corporate data mining prevalent across the digital spaces we frequent. 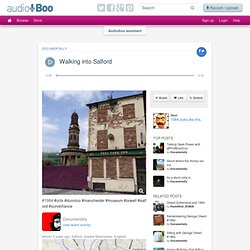