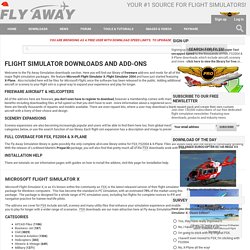 FSX Get Started - Ultimate FSX Addons Guide For 2015. Using ATC in FSX. For many of us taking part in flying an aircraft in FSX can be hard work. 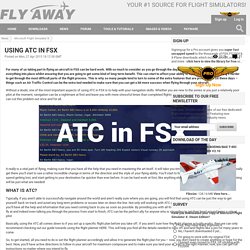 With so much to consider as you go through the day, it can be hard work just trying to put everything into place whilst ensuring that you are going to get some kind of long-term benefit. This can start to affect your ability to fly with confidence, making it harder to get through the most difficult parts of the flight process. This is why so many people tend to turn to some of the extra features that are provided in FSX these days – things such as Air Traffic Control can be the extra tool needed to make sure that you can get a bit more success when flying through your aircraft. Without a doubt, one of the most important aspects of using ATC in FSX is to help with your navigation skills. It really is a vital part of flying, making sure that you have all the help that you need in mastering the art itself.

This is a plugin for X-Plane, to connect and use FS Economy's economy system. The plugin uses Sandy Barbour's Python interface, so plugin may work on Mac, Linux and Windows too. This project has moved to GitHub. But FSEconomy team has taken the source to a closed version control. The FlightSim Store: Your Source for Flight Simulation Software and Accessories. HomeFlite Simulator Cockpit Plans. Just Look At These Features The design incorporates features most asked for by flight simulation enthusiast Lower monitor for instrument display upper monitor(s) for outside view Accommodates most yokes, throttles, wheels and HOTAS systems Plenty of room for commercial or DIY switches and control panels Final cost is a fraction of commercial units with the same functionality Flexible design to meet the builder's needs Environmentally friendly construction materials Compact size perfect fit. 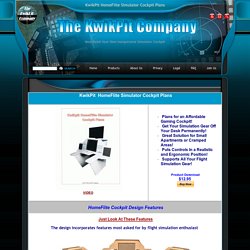 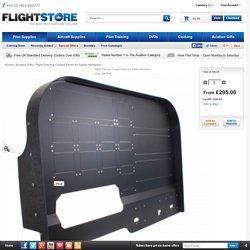 Connecting RaspberryPi to XPlane. Flightdecksolutions. How To Build The Cessna 172 Cockpit Simulator Project. By Rory Gillies (20 January 2004) Introduction As an avid flight simulation enthusiast for many years I've accumulated thousands of hours in the virtual skies, mostly in single engine GA aircraft such as the Cessna 172. 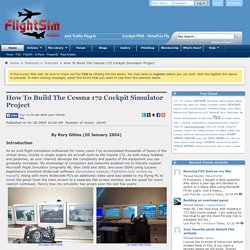 As with many hobbies and pastimes, as your interest develops the complexity and quality of the equipment you use gradually increases. My knowledge of computers and networks enabled me to literally expand Microsoft Flight Simulator (originally 98, then 2000 and 2002, and soon 2004) using Luciano Napolitano's excellent WidevieW software (developers website; FlightSim.Com review by myself). Along with more WidevieW PC's an additional video card was added to my flying PC to move the panel from the main screen to a separate flat screen monitor, but the quest for more realism continued. 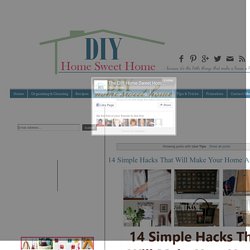 Save Pour your shower supplies into pretty bottles that match your bathroom decor. (source) Cover your laundry baskets in rope. Leave the rope as-is or use paint to add a decorative pattern. Cover up your ugly wire shelves with plywood. Diy home sweet home: Organizing Printables. Did You Know - Round 3. While working online, I come across several tips and tricks that just seem to make life easier and make me wonder how I ever lived without them. 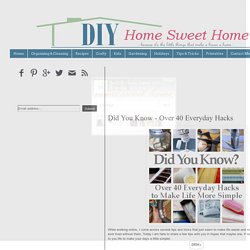 Today I am here to share a few tips with you in hopes that maybe one, if not a few, can be applied to you life to make your days a little simpler. 1. You can save a lot of money by purchasing items at certain times of the year. Often, items go on sale when the season changes or when the demand for a product changes. For example, stores drop the prices on their winter clothes once the weather starts to warm up. 2. 6. Did You Know... One thing that just makes me giddy all over is when I am randomly bouncing around from site to site and suddenly I discover something new. 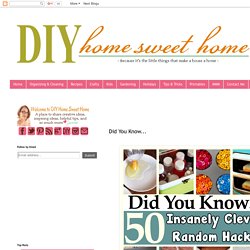 Something that makes me think "Why did I not discover this sooner? " Some of these new ideas (new to me at least) have made life just a little easier. 32 Of The Internet's Most Crucial Life Hacks, Compiled To Help You Master The Universe. BowlsNSW Regulations Amendment 15 0813. 2016 COP. Introducing the New Logitech Living Home Lineup. Sesame Smart Lock Preview. It's no surprise that we're seeing new connected locks emerge in 2015. The recent boom in smart security options has opened the door for a new generation of smart locks, and with early contenders like Lockitron and Goji stumbling out of the gate, many consumers are still waiting for more options. That's where Sesame hopes to come in. The product of a Stanford University startup called Candy House Inc., Sesame promises to fit over your existing deadbolt, then connect with your smartphone over Bluetooth, allowing you to open the lock using an Android or iOS app.

If you'd rather leave your phone in your pocket, Sesame says you can unlock your door using a customized knock. And, of course, keys are still an option. With the exception of that knocking trick, that pitch sounds an awful lot like the August Smart Lock -- but the two part ways when it comes to pricing. Sweet Search. Google Advanced Image Search. Google Advanced Search. CC Search. Understand what you read.

With my taxi and my girlfriend’s taxi, we’ve been taking them to a suspension workshop and had the bushes replaced there. It turned out that replacing the control arms actually isn’t all that difficult. Awakening the Aussie Ford Six - Part Two. In Part One of this series we looked at the differences in engines used from the EA to AU Falcon. Jim and Brendan Mock from J.M.M. (Jim Mock Motorsport) suggested the best platforms for tuning are the EF and EL Falcon as well as the Tickford XR6. However, since all of the good bits are interchangeable, it doesn’t matter too much if you’re starting with a different model. Now let’s look at approaches to modification... Exhaust and Headers Jim Mock says the best place to start modification on a Falcon six is the exhaust system. "The standard exhaust system on the Falcon ranges between about 1¾ to 2 inches diameter for most of its length," says Jim.

J.M.M. offers a number of off-the-shelf Falcon upgrades (which we’ll come to) and all use a collector-back 2½ inch mandrel bent pipe. Project & Task Management. Send Large Files. Wish Lists. Animation software. Wellbeing Hacks. Transcend Class 10 128GB SD Card price. Screen-reader users, click here to turn off Google Instant. About 117,000 results SponsoredBased on your search query, we think you are trying to find a product. Clicking in this box will show you results from providers who can fulfill your request. Google may be compensated by some of these providers. Buy, Compare & Review. Best Third-Party Lens Selection for Canon EOS 7D and Nikon D7000 (or D300S) DigitalRev TV. Nikon - Camera & Photo: Electronics. How to Pack an Emergency Kit Like a Spy Plane Pilot. How To Motivate Yourself: 3 Steps Backed By Science.

You make goals… but then you procrastinate. You write a to-do list… but then you don’t follow through. And this happens again and again and again. Seriously, what’s the problem? Why are we so good at thinking of what to do but so terrible at actually doing those things? The problem is you’re skipping an essential step. The Mistake Every Productivity System Makes Productivity systems rarely take emotions into account. We can’t ignore our emotions. And we can’t fight our feelings. Productivity Hacks From Startup Execs. 6 Toxic Behaviors That Push People Away: How To Recognize Them In Yourself and Change Them.