How To Motivate Yourself: 3 Steps Backed By Science 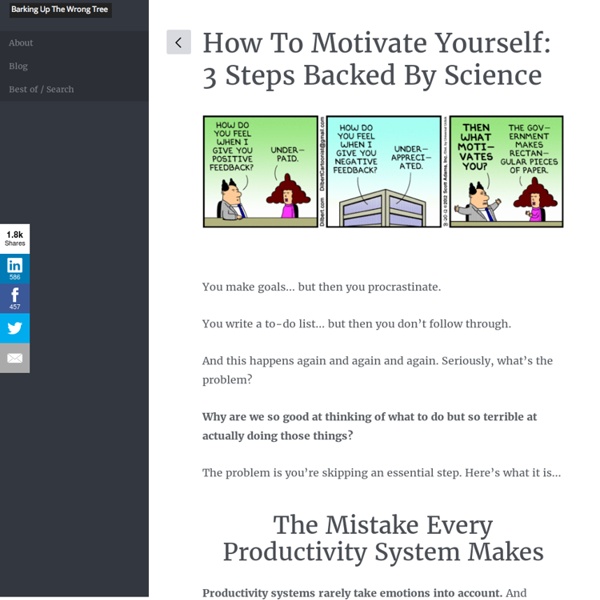 You make goals… but then you procrastinate. You write a to-do list… but then you don’t follow through. And this happens again and again and again. Why are we so good at thinking of what to do but so terrible at actually doing those things? The problem is you’re skipping an essential step. The Mistake Every Productivity System Makes Productivity systems rarely take emotions into account. We can’t ignore our emotions. And we can’t fight our feelings. Via The Antidote: Happiness for People Who Can’t Stand Positive Thinking: …when experimental subjects are told of an unhappy event, but then instructed to try not to feel sad about it, they end up feeling worse than people who are informed of the event, but given no instructions about how to feel. So what does the unavoidable power of feelings mean for motivation? In their book Switch, Chip and Dan Heath say that emotions are an essential part of executing any plan: Focus on emotions. We need to think to plan but we need to feel to act. Sum Up Tags: Related:  Self Actualisation

25 Killer Websites that Make You Cleverer It’s easy to forget that we have access to a virtually limitless resource of information, i.e. the Internet. For a lot of us, this is even true at our fingertips, thanks to the ubiquity of smartphones and an ever-increasing push for online greatness by tech engineers all over the world. As a result, there are countless websites out there that are geared to make you smarter and more brilliant for either a low or no cost. Here are just 25 killer websites that may just make you more clever than ever before. 1. Duolingo This isn’t the first time I’ve recommended this language-teaching website (and app), and it certainly won’t be the last. 2. Have you ever wanted to pick up a subject you’re not well-versed in, but you didn’t have the money to invest in a college course? 3. Guitar is one of the few instruments out there that’s actually pretty easy to learn if you’re a little older, making it one of the most accessible instruments. 4. 5. 6. 7. 8. 9. 10. 11. 12. 13. 14. 15. 16. 17. 19. 20. 21.

How To Be Motivated: 4 New Insights From Research Sometimes there is not enough coffee in universe to get you going. How to be motivated is something we all struggle with at some time or another. Or, um, daily. Motivation is such a mystery. It’s a feeling and we understand it so poorly it feels impossible to do anything about it. Dan Pink wrote the book on motivation. He’s the New York Times bestselling author of Drive: The Surprising Truth About What Motivates Us. His books have sold more than 2 million copies. Here’s what I love about Dan: He’s not the type to write a book and just move on. Here’s what you’ll get from this post: Why you don’t feel motivated.What the research says really produces motivation.The single most motivating thing there is and how to have it in your life.The biggest mistake you’re making when it comes to motivation. Let’s get to it… 1) This Is Why You Don’t Feel Motivated You’re probably thinking too much about the rewards involved. Rewards like money are tricky. Here’s Dan: We all want money. Autonomy Mastery Tags:

(13) How much should you have accomplished by 26 years old? This 15-Minute Activity Will Make You More Successful At Work News - Is it good for people to fail occasionally? 2 March 2014Last updated at 19:47 ET By Lucy Wallis BBC News In our highly competitive world, we prize success and hate it when things go wrong, but is there actually a value in failing? When Irish author Flann O'Brien submitted the manuscript for his second book, The Third Policeman, to a London publisher in 1940 it was rejected. But rather than admit this lack of success to his friends, he pretended the manuscript had accidentally blown out of the boot of his car on a trip to Donegal and had been lost forever. "This was a ruinous thing to say because he couldn't then turn around and say, 'Oh I've found it again,' so the manuscript sat very openly on his sideboard until his death," says Booker Prize-winning author Anne Enright. "The year after [O'Brien's] death, his wife got it published to a keen reception." If O'Brien had been more open about his failure to get the book printed, he might have seen his work published within his lifetime. Continue reading the main story “Start Quote

(4) What are the most productive ways to spend time on the Internet? 5 Ways to Make Your To-Do Lists More Effective To-do lists seem pretty straightforward: A list of all of the tasks you plan to accomplish during any given day or week. And, really, there are few things more satisfying than drawing lines through each entry. Progress! But, many times, they balloon to unrealistic levels, and we end up feeling overwhelmed and ineffective. That’s usually because we’re using them as a catch-all for every task that’s thrown at us. 1. When you take a few minutes to write your to-do list the night before, you can hit the ground running the next morning, Pozen advises. 2. Everything that goes on your daily to-do list should fit two criteria: It should be something important that you need to do--versus that which doesn’t really need to be done or which can be delegated to someone else--and something that needs to be done on that day. “When people don’t take control, they go through their days passively. 3. 4. Pozen divides his list into two columns. 5.

Einstein's Puzzle # Copyright (C) 2004 Lauri Karttunen # # This program is free software; you can redistribute it and/or modify # it under the terms of GNU General Public License as published by # the Free Software Foundation; either version 2 of the License, or # (at your option) any later version. # This program is distributed in the hope that it will be useful, # but WITHOUT ANY WARRANTY; without even the implied warranty of # MERCHANTABILITY or FITNESS FOR A PARTICULAR PURPOSE. See the # GNU General Public License for more details. Einstein's Puzzle Variations of this riddle appear on the net from time to time. It is sometimes attributed to Albert Einstein and it is claimed that 98% of the people are incapable of solving it. Let us assume that there are five houses of different colors next to each other on the same road. The Englishman lives in the red house. The question to be answered is: Who keeps fish? This is a simple constraint satisfaction problem. The result is a network with five paths.

How To Motivate People - 4 Steps Backed By Science Employees, spouses, kids — what does it take to get people motivated so you don’t have to nag them? Motivation is powerful. It predicts success better than intelligence, ability, or salary. Via The 100 Simple Secrets of Successful People: When tested in national surveys against such seemingly crucial factors as intelligence, ability, and salary, level of motivation proves to be a more significant component in predicting career success. I’ve covered persuasion, leadership, improving habits and fighting procrastination but what’s it take to get others to really give their best? 1) Stop Bribing Them When actors would ask the great film director Alfred Hitchcock “What’s my motivation?” Rewards definitely work. Researchers find that perceived self-interest, the rewards one believes are at stake, is the most significant factor in predicting dedication and satisfaction toward work. But as Dan Pink explains in Drive: The Surprising Truth About What Motivates Us there’s a problem with this equation: