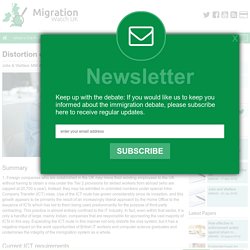 Foreign companies who are established in the UK may move their existing employees to the UK without having to obtain a visa under the Tier 2 provisions for skilled workers from abroad (who are capped at 20,700 a year). Instead, they may be admitted in unlimited numbers under special Intra-Company Transfer (ICT) visas. Use of the ICT route has grown considerably since its inception, and this growth appears to be primarily the result of an increasingly liberal approach by the Home Office to the issuance of ICTs which has led to them being used predominantly for the purpose of third-party contracting. This practice is almost entirely confined to the IT industry. Current ICT requirements 2. Long-term staff visa - For individuals brought into a role that requires previous experience working for the company. 3. 4.

Boeing engaged $9-an-hour Indian engineers to build 737 Max Software. It remains the mystery at the heart of Boeing Co’s 737 Max crisis: how a company renowned for meticulous design made seemingly basic software mistakes leading to a pair of deadly crashes. 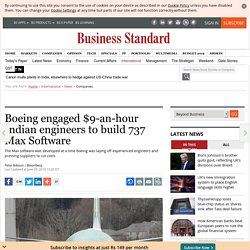 Longtime Boeing engineers say the effort was complicated by a push to outsource work to lower-paid contractors. The Max software -- plagued by issues that could keep the planes grounded months longer after U.S. regulators this week revealed a new flaw -- was developed at a time Boeing was laying off experienced engineers and pressing suppliers to cut costs. Increasingly, the iconic American planemaker and its subcontractors have relied on temporary workers making as little as $9 an hour to develop and test software, often from countries lacking a deep background in aerospace -- notably India.

The coders from HCL were typically designing to specifications set by Boeing. Still, “it was controversial because it was far less efficient than Boeing engineers just writing the code,” Rabin said. Costly Delay U.S. UKIP and Farage Seize on Osborne Immigration Revelations - Guido Fawkes Guido Fawkes. George Osborne has admitted that the Cameron government never tried to keep its promises on immigration and claimed that every senior member of the Cabinet privately opposes the Tory target on reducing net migration. 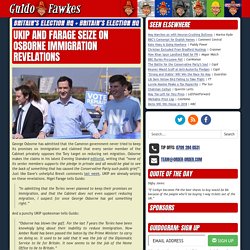 Osborne makes the claims in his latest Evening Standard editorial, writing that “none of its senior members supports the pledge in private and all would be glad to see the back of something that has caused the Conservative Party such public grief”. Just like Dave’s unhelpful Brexit comments last week, UKIP are already seizing on these revelations. Public Interest Disclosure Act 1998 - Wikipedia. The Public Interest Disclosure Act 1998 (c.23) is an Act of the Parliament of the United Kingdom that protects whistleblowers from detrimental treatment by their employer. 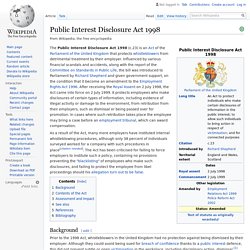 Influenced by various financial scandals and accidents, along with the report of the Committee on Standards in Public Life, the bill was introduced to Parliament by Richard Shepherd and given government support, on the condition that it become an amendment to the Employment Rights Act 1996. After receiving the Royal Assent on 2 July 1998, the Act came into force on 2 July 1999. It protects employees who make disclosures of certain types of information, including evidence of illegal activity or damage to the environment, from retribution from their employers, such as dismissal or being passed over for promotion. In cases where such retribution takes place the employee may bring a case before an employment tribunal, which can award compensation.

Background[edit] Complaints about an MP – w4mp. There are two organisations which deal with complaints about Members of Parliament: The Parliamentary Commissioner for Standards will investigate allegations that an MP has broken the Code of Conduct and the rules associated with it. 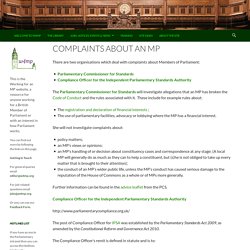 These include for example rules about:   She will not investigate complaints about: Pcfsprocednote2. Complaints and Investigations - UK Parliament. Complaints process. 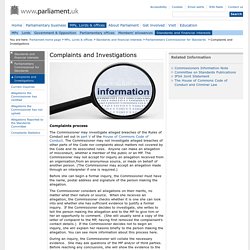 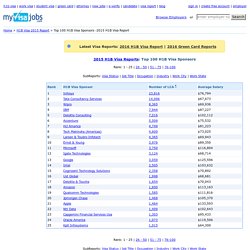 For Example, the first record on this report means that Infosys filed 23,816 Labor Condition Applications(LCA) for H1B Visa in fiscal year 2014. Changes to UK Tier 2 (Intra-Company Transfer) Visa - DavidsonMorris. Parliamentary Commissioner for Standards. Tata v Sengar Judgment. 0123419. Texas engineer, whose wife sent Obama his résumé, still unemployed. FORT WORTH — More than two months after President Barack Obama asked for Darin Wedel's résumé, the phone is quiet, e-mails are no longer flooding in and the long-sought-after job interviews -- which had begun to be scheduled -- have petered out. 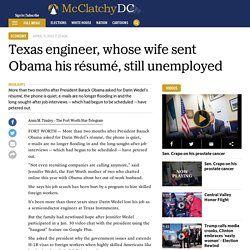 "Not even recruiting companies are calling anymore," said Jennifer Wedel, the Fort Worth mother of two who chatted online this year with Obama about her out-of-work husband. She says his job search has been hurt by a program to hire skilled foreign workers. It's been more than three years since Darin Wedel lost his job as a semiconductor engineer at Texas Instruments. Jennifer Wedel to Barack Obama: 'Why Doesn’t my Husband Have a Job?' An alarmingly large amount of Republican voters in Mississippi and Alabama believe President Barack Obama is Muslim, according to a new poll. 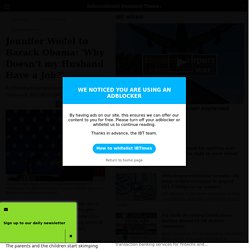 Buy mimoLive. FOI 3181 35191 Response 2015 05 22v1.0. Office of the Immigration Services Commissioner. Confronting the Parasite Economy. There are two types of businesses in America today: those that pay their workers a living wage—the real economy—and those that don’t—the parasite economy. 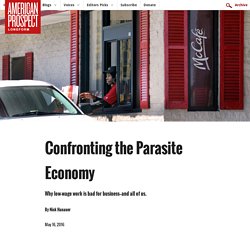 BA Rally Feb 29th. Wednesday, February 24, 2016 GMB Rally At Heathrow On February 29th Against British Airways Outsourcing It Jobs And Abusing The Tier 2 Visa System Members will make short walk from BA HQ at Waterside to meeting in protest at outsourcing and offshoring work to Tata Consultancy Services (TCS) in India says GMB. GMB British Airways workers will hold a public meeting and rally from 12.30pm on 29th February at the Thistle Hotel, Heathrow over proposals to outsource the company’s IT end user computing jobs Tata Consultancy Services (TCS) in India. TCS will need to carry out work in the UK and they will bring workers from India fill the jobs of the ex BA workers. GMB is accusing them of abusing the current visa regulations regarding rolling Tier 2 visas.

Local MP John McDonnell, MP for Hayes & Labour shadow Chancellor, will be speaking at the event along with GMB national officer for aviation, Mick Rix. Logne exposes a crisis in our continent, yet parliament is debating Donald Trump. Europe is going through a period of radical change, but it is facing this with a process of radical self-distraction. Unwilling to face up to our problems we obsess over the responses to those problems. There have been some startling recent examples. As the whole world now knows, on New Year’s Eve in Cologne, dozens of German women were sexually assaulted, apparently by some of that country’s more recent arrivals.

The Staggering Impact of IT Systems Gone Wrong. The world has relied on large-scale IT systems for decades, but we still haven’t learned how to prevent and avoid major glitches and failures. Here at IEEE Spectrum, we’ve been writing about such failures for 10 years (first in the oft-cited article “Why Software Fails,” and later in the Risk Factor blog). Now we’re taking a step back to look at the bigger picture.