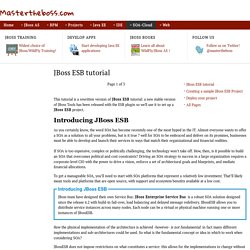 As you certainly know, the word SOA has become recentely one of the most hyped in the IT. Almost everyone wants to offer a SOA as a solution to all your problems, but is it true ? Well for SOA to be embraced and deliver on its promises, businesses must be able to develop and launch their services in ways that match their organizational and financial realities. If SOA is too expensive, complex or politically challenging, the technology won’t take off. To get a manageable SOA, you’ll need to start with SOA platforms that represent a relatively low investment.

Introducing JBoss ESB JBoss team have designed their own Service Bus: JBoss Enterprise Service Bus is a robust SOA solution designed since the release 4.2 with build-in fail-over, load balancing and delayed message redelivery. 1. The Open Universe: Fuse ESB Enterprise WS-Security Quickstart with Fuse IDE. The objective of this article is to show how to compile, deploy and run a SOAP web service with Apache CXF using WS-Security and the Blueprint configuration. 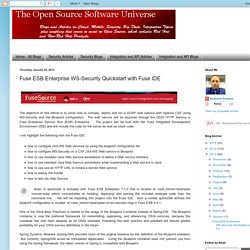 The web service will be exposed through the OSGi HTTP Service in Fuse Enterprise Service Bus (ESB) Enterprise. The project will be built with the Fuse Integrated Development Environment (IDE) and will include the code for the server as well as client code. I will highlight the following with the Fuse IDE: The Message: Calling Web Services with Apache Camel. Web Services are very important components of most (if not all) of the integration projects these days. 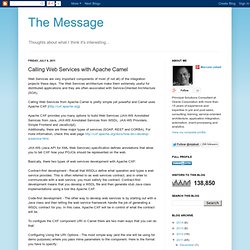 The Web Services architecture make them extremely useful for distributed applications and they are often associated with Service-Oriented Architecture (SOA). Calling Web Services from Apache Camel is pretty simple yet powerful and Camel uses Apache CXF ( Apache CXF provides you many options to build Web Services (JAX-WS Annotated Services from Java, JAX-WS Annotated Services from WSDL, JAX-WS Providers, Simple Frontend and JavaScript). Additionally, there are three major types of services (SOAP, REST and CORBA). For more information, check this web page JAX-WS (Java API for XML Web Services) specification defines annotations that allow you to tell CXF how your POJOs should be represented on the web. Secure-soap: demonstrates a secure SOAP web service with Apache CXF. 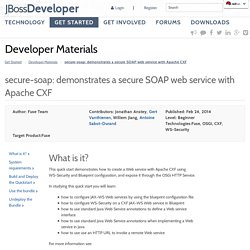 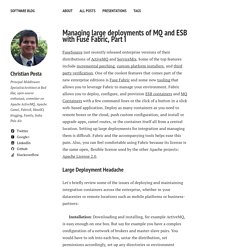 Some of the top features include incremental patching, custom platform installers, and third party verification. One of the coolest features that comes part of the new enterprise editions is Fuse Fabric and some new tooling that allows you to leverage Fabric to manage your environment. Fabric allows you to deploy, configure, and provision ESB containers and MQ Containers with a few command lines or the click of a button in a slick web-based application. Deploy as many containers as you need to remote boxes or the cloud, push custom configuration, and install or upgrade apps, camel routes, or the container itself all from a central location. Setting up large deployments for integration and managing them is difficult. Large Deployment Headache Installation: Downloading and installing, for example ActiveMQ, is easy enough on one box. . FMC:karaf@FuseManagementConsole> list -t 0. Part II: Managing Large Deployments of MQ and ESB With Fuse Fabric.

In the last blog post I introduced Fuse Fabric, an overview of the problems it is intended to solve, and the components that it uses to accomplish pain-free management of large deployments of ActiveMQ and ServiceMix/ESB containers. 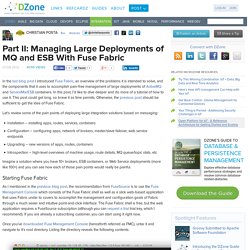 In this post, I’d like to dive deeper and do more of a tutorial of how to use it. This post could get long, so brave it as time permits. Otherwise, the previous post should be sufficient to get the idea of Fuse Fabric. Let’s review some of the pain points of deploying large integration solutions based on messaging: Installation – installing apps, routes, services, containersConfiguration – configuring apps, network of brokers, master/slave failover, web service endpointsUpgrading – new versions of apps, routes, containersIntrospection – high-level overviews of machine usage, route details, MQ queue/topic stats, etc Starting Fuse Fabric Once you’ve downloaded Fuse Management Console (henceforth referred as FMC), untar it and navigate to it’s root directory. . 02.