Facebook isn’t eavesdropping, but the truth is more disturbing. Perhaps one of the most pervasive longstanding technology conspiracy theories is that your smartphone is constantly listening in on your private conversations. 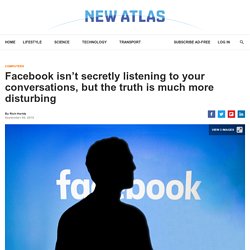 Almost everyone at some point has felt the eerie synchronicity of seeing an ad served up on Facebook that exactly corresponds to a recent conversation. It’s certainly unnerving, and the most simple explanation is one of direct surveillance. Of course Facebook is listening in on your private conversation with friends, catching key words, and then serving you tailored advertisements. And of course Facebook would deny this is happening. The problem is, outside of anecdotal cases, no one has ever been able to find clear evidence that this is actually happening. Facebook admits listening to private conversations In early August 2019, Bloomberg News published a story revealing how Facebook had contracted an external company to transcribe audio conversations conducted through the Facebook Messenger app.

No Ghost in the Machine - <a href=' Halpern</a> iStock It is desirable to guard against the possibility of exaggerated ideas that might arise as to the powers of the Analytical Engine. 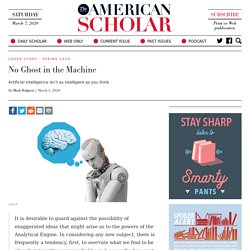 In considering any new subject, there is frequently a tendency, first, to overrate what we find to be already interesting or remarkable; and, secondly, by a sort of natural reaction, to undervalue the true state of the case, when we do discover that our notions have surpassed those that were really tenable. Heuristic Dendral: a Family of LISP Programs. AIM-080. - Stanford Publications - Spotlight at Stanford. The Edward A. Feigenbaum Papers - Spotlight at Stanford. Math in Data Science – Dataquest. Math is like an octopus: it has tentacles that can reach out and touch just about every subject. 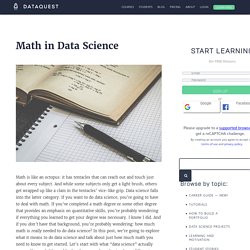 And while some subjects only get a light brush, others get wrapped up like a clam in the tentacles’ vice-like grip. Data science falls into the latter category. If you want to do data science, you’re going to have to deal with math. If you’ve completed a math degree or some other degree that provides an emphasis on quantitative skills, you’re probably wondering if everything you learned to get your degree was necessary. Mining Knowledge Graphs from Text. Introduction to Machine Learning and AI: Conversations with Chris Penn. Pro-Gun Russian Bots Flood Twitter After Parkland Shooting. @IUinformatics Both open source! Data here Model (not mine) here Many other char-rnn models too. How to choose effective MOOCs for machine learning and data science? PokerStars to Hire Artificial Intelligence Researchers. Sharelines A surge in AI research at PokerStars could lead to many exciting new offerings for their customers. 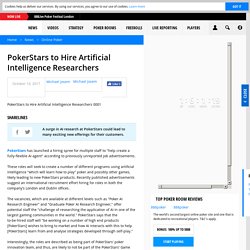 PokerStars has launched a hiring spree for multiple staff to "help create a fully-flexible AI agent" according to previously unreported job advertisements. These roles will seek to create a number of different programs using artificial intelligence "which will learn how to play" poker and possibly other games, likely leading to new PokerStars products. Recently published advertisements suggest an international recruitment effort hiring for roles in both the company's London and Dublin offices. The vacancies, which are available at different levels such as "Poker AI Research Engineer" and "Graduate Poker AI Research Engineer," offer potential staff the "challenge of researching the application of AI in one of the largest gaming communities in the world.

" Interested candidates can apply for any of the roles online here. This addictive free paperclip game is also a terrifying lesson in how artificial intelligence will make us unnecessary. I've made over 700,000,000 paperclips. 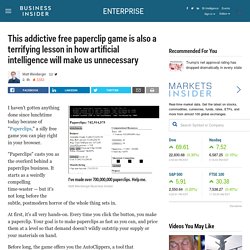 Help me. Matt Weinberger/Business Insider I haven't gotten anything done since lunchtime today because of "Paperclips," a silly free game you can play right in your browser. "Paperclips" casts you as the overlord behind a paperclips business. It starts as a weirdly compelling time-waster — but it's not long before the subtle, postmodern horror of the whole thing sets in. At first, it's all very hands-on. Before long, the game offers you the AutoClippers, a tool that automatically makes paperclips without your having to push the button.

And it keeps going from there, to hilarious levels: Eventually, your paperclip making machine will offer you the ability to hypnotize your customers into buying more paperclips, generate a catchy new advertising slogan, and even automatically invest in the stock market. At a certain point, the game basically plays itself. Thales to set up artificial intelligence research centre in Montreal - 1310 NEWS.

OTTAWA – The President of the Ottawa Police Association is calling the mayor’s response to the unsanctioned injection site operating in Lowertown hypocritical. 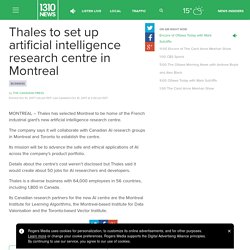 He says calls about the site aren’t even dispatched to police, and officers are very subtly being told to stand down regarding issues pertaining to the tent. Matt Skof told the Carol Anne Meehan Show, “He’s made comments stating that this is a criminal issue and in the realms of the police. And the police have made it very clear that they are awaiting direction from the City. We all know that the City has not provided that direction … To suggest this is a police matter but not provide direction for the police – that’s hypocrisy.”