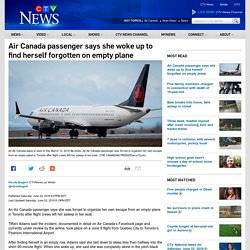 Tiffani Adams said the incident, documented in detail on Air Canada’s Facebook page and currently under review by the airline, took place on a June 9 flight from Quebec City to Toronto’s Pearson International Airport. 'Appalling treatment': Couple in wheelchairs left alone for almost 12 hours at Vancouver airport. NP View: The wounded Liberals are now importing U.S. abortion anxiety to Canada. Mike Pence, vice president of the United States, was in Ottawa this week for a quick visit with Canadian officials. 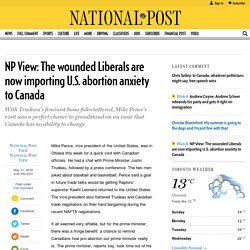 He had a chat with Prime Minister Justin Trudeau, followed by a press conference. The two men joked about baseball and basketball; Pence said a goal in future trade talks would be getting Raptors’ superstar Kawhi Leonard returned to the United States. The vice president also flattered Trudeau and Canadian trade negotiators on their hard bargaining during the recent NAFTA negotiations. It all seemed very affable, but for the prime minister, there was a fringe benefit: a chance to remind Canadians how pro-abortion our prime minister really is. The prime minister, reports say, took time out of his otherwise affable meeting to express Canada’s concern over recent developments in the U.S. A Murder Trial Years in the Making: 3 Deaths, an Alleged Serial Killer and the Chilling Reason Ashton Kutcher's Knock Went Unanswered. 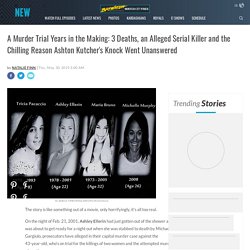 Washington is first state to allow composting of human bodies as environmental alternative. SEATTLE — Ashes to ashes, guts to dirt. 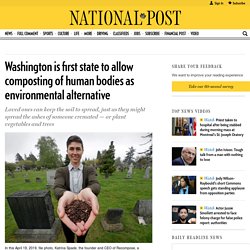 Gov. Scientists discover China has been secretly emitting banned ozone-depleting gas. A chemical banned around the globe for the last 30 years has made an unfortunate resurgence. 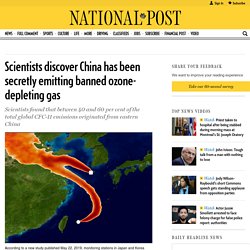 And all signs, in a new study, point to China as the culprit. In the 1980s, countries came together to sign The Montreal Protocol on Substances that Deplete the Ozone Layer, a landmark treaty designed to halt and reduce the production of chlorofluorocarbons (CFC), chemicals used in fridges and foams that had the side effect of tearing through the Earth’s ozone layer. The Montreal Protocol has been signed by 197 countries around the world, including Canada, the U.S., and China. HuffPost is now a part of Oath. For 12 years during the Cold War, the United States ― locked in a fierce nuclear arms race with the Soviet Union ― laid waste to parts of the Marshall Islands with a series of devastating atomic bomb tests. 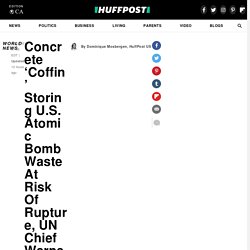 The U.S. detonated a total of 67 nuclear and atmospheric bombs on the Marshallese atolls of Enewetak and Bikini between 1946 and 1958 ― forcing many islanders to abandon their ancestral homes and leaving behind a staggering amount of radioactive soil and ash that continues to threaten the region and its people today. U.N. Secretary General Antonio Guterreswarned last week that a concrete “coffin” built decades ago on an Enewetak island to contain U.S. nuclear waste is at serious risk of cracking open and spilling its toxic contents into the Pacific Ocean. 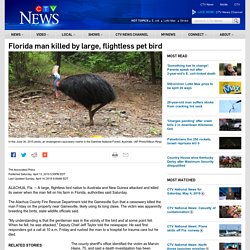 The Alachua County Fire Rescue Department told the Gainesville Sun that a cassowary killed the man Friday on the property near Gainesville, likely using its long claws. The victim was apparently breeding the birds, state wildlife officials said. Cockroaches, ‘thick accumulation’ of rodent excrement found in kitchen at centre of ‘rat soup’ video: inspectors. Tourist busted trying to smuggle drugged orangutan out of Indonesia in suitcase. A Russian tourist was arrested after attempting to smuggle a two-year-old orangutan found drugged and stuffed into a suitcase at an airport in Indonesia, authorities said. 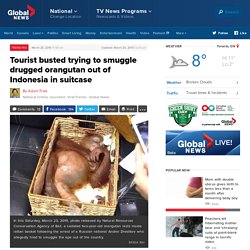 The tourist, identified as Andrei Zhestkov, was arrested Friday at Ngurah Rai International Airport in Bali after an X-ray revealed the male orangutan was inside a basket stuffed in some luggage, the Jakarta Post reported. According to Agence France-Presse (AFP), authorities opened the suitcase to find the animal asleep in the basket. Mom with double uterus gives birth to twins less than a month after delivering baby boy. Air Canada flight attendants’ union says crew don’t want to be forced to fly on Boeing 737 MAX 8. The union representing Air Canada flight attendants says its members don’t want to be forced to fly on Boeing 737 MAX 8 jets amid growing safety concerns surrounding the aircraft in the wake of Sunday’s crash of an Ethiopian Airlines passenger plane. 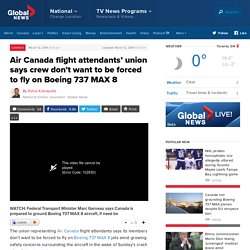 In a statement, the Air Canada Component of CUPE said the union is asking Air Canada to prioritize the safety of passengers and crew. “Air Canada flight attendants have safety concerns following Ethiopian Airlines Flight 302 crash. 'And then he was raping me': Victim goes public about shocking attack to reveal justice system flaws. Warning to readers, this story includes graphic content. 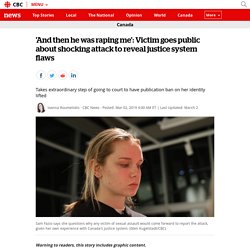 There is no mistaking Sam Fazio's vulnerability, or her reluctance. The 20-year-old is a sexual assault survivor who came of age in the #MeToo era. She's an emerging warrior, and yet often feels nothing like one. ‘We need to get ready’: RCMP planning for return of Canadian ISIS members. The RCMP is preparing for the return of at least a dozen Canadians detained in Syria amidst the collapse of the so-called Islamic State, a senior law enforcement official has told Global News. The capture of suspected Canadian ISIS members, and uncertainty over their fate due to a planned U.S. troop withdrawal from Syria, has prompted the RCMP to ramp up preparations for their possible arrival.

As part of a national strategy now being put in place, police are working with prosecutors to prepare charges and peace bonds against the detainees, and speaking with allies to manage their return to Canada. “We need to get ready in case they come back sooner than what we had expected,” Deputy Commissioner Gilles Michaud, who heads the RCMP’s federal policing branch, said in an interview Wednesday. READ MORE: Canadian captured in Syria admits to role in gruesome ISIS execution videos While many of the Canadians in ISIS are believed to have died, Global News revealed last October that the U.S. Hidden-camera footage reveals overstretched nursing home staff struggling to care for residents.

Marie Harris's mother died alone, after calling out for help from her bed in a long-term care home in Markham, Ont. She was found the next morning, her body slumped half off of her bed, pointed toward the chair where her call bell — a button used to signal the nurses when a patient is in distress — sat out of her reach. Bruce McArthur’s victims: A look at the eight lives lost. All but one of Bruce McArthur’s eight victims were marginalized, vulnerable men. Six of them were refugees or immigrants. They had limited financial means. They didn’t have family support or their relatives were newcomers with a poor grasp of English. Four had drinking or drug problems. Manitoba semi driver dashcam records road rage.

'Troubling allegations' prompt Health Canada review of studies used to approve popular weed-killer. Conrad Black: Canadians don’t see the Kavanaugh episode for what it is. Some readers lightly chastised me last week for not commenting on the fracas in the United States about the nomination of Judge Brett Kavanaugh to the Supreme Court of that country. I write for the National Review Online (New York) and the American Greatness site in Arizona, whence I am widely posted on and often reprinted in RealClearPolitics and the New York Sun, and Canadian readers interested in my views on American affairs can find them there. The disturbing record behind one of B.C.’s top billing doctors. Why a water-gulping Wisconsin plant is a wake-up call for Canada. Read Story Transcript Canadians should be worried about the ecological impact of an enormous industrial plant planned for Wisconsin, a leading voice on water conservation says.

Bob Sandford, the EPCOR Chair for Water and Climate Security at the United Nations University Institute for Water, Environment and Health, warned that while Canada seems to enjoy an abundance of water resources, the supply isn't limitless and needs to be protected. 14.7 million visitors to U.S. could face social media screening. Nearly all applicants for a visa to enter the United States — an estimated 14.7 million people a year — will be asked to submit their social-media user names for the past five years, under proposed rules that the State Department issued Friday.

World unprepared for next major volcanic eruption, researchers say ‘death tolls could reach millions’ The next major volcanic eruption is capable of wiping out an entire city, killing millions of people and bringing global financial markets to a halt, according to a group of scientists. Toad without a head found hopping around forest, leaves scientists stumped. Some guy grabbed & stroked my calf (??) as I walked by on the plane, so I took his picture. Not gonna post it, but I hope he's freaked out.

Artist defends eyeball tattoo that left Ottawa woman with partial vision loss - Ottawa. The artist who left an Ottawa woman with vision loss in one eye after a tattoo injection went wrong is defending his actions, saying he didn't make any mistakes during the procedure. California woman frames her husband's ex-fiancee and send her to jail for MONTHS. The Arctic is full of toxic mercury, and climate change is going to release it. We already knew that thawing Arctic permafrost would release powerful greenhouse gases. Library and Archives finally releases 98-year-old document on sick First Nations children - CBC News.

Disappearing deposits: What happens when banks lose your money - Toronto. Forty years ago, she pioneered Canada’s space weather programs. Now, they might prevent another stone age. Yellowstone supervolcano may erupt sooner than thought, potentially wiping out life. Why old-fashioned bank drafts could leave you on the hook for big bucks. Main Street business locks doors after several incidents with suspected meth users - Manitoba. Russian website streaming hundreds of cameras in Canada, experts warn your connected devices could be at risk. Six-year-old Ryan makes millions every year reviewing toys on YouTube. How ‘flawed’ B.C. court rulings tore 4 kids away from their dad for 5 years and counting. Powerful video warns of the danger of autonomous ‘slaughterbot’ drone swarms. Workers stitched pleas for help into clothes sold by Zara. More than 15,000 scientists from 184 countries issue 'warning to humanity' - Technology & Science.