Joey Ortega started his investigative career early at the age of 18 working as an apprentice investigator for local detectives. He started out doing insurance fraud investigations and background investigations. Proving adept in the areas surveillance and information gathering, Joey continued to seek further investigative challenges. From there he went on to do internal investigations for a number of companies that include; Sears, Roebuck Co., Saks Fifth Avenue, and K-mart. He was largely responsible for investigating issues of internal theft, embezzlement, workers comp fraud, and crime ring investigations. His success eventually earned him a position as a national investigator for a cellular chain, investigating crime rings on a national level. Trained in the Reid technique (interviewing/interrogation), Joey was able to gain confessions consistently without a single prosecution ever being challenged in court. Throughout his career as an internal investigator Joey continued to work for various private investigative agencies. Moving away from insurance fraud, Joey began developing his skills in the areas of defense investigation, fidelity investigation, missing person’s investigations, and stalker investigations. It was the area of stalker investigations that Joey began to discover his passion for computer crime investigations. Having to learn quickly how to trace harassing and threatening emails, Joey began see that this is where the future of crime and justice was heading and decided to throw himself deeply into the subject. As a result, Joey’s clientele began to include those who were victims of internet fraud and cyber attacks. One of Joey’s methods of tracking down E-bay fraudsters was featured in PI Magazine In June of 2005. Joey also hosts a weekly radio show Behind The Yellow Tape on Blogtalkradio. The show investigates cold cases, serial crime and discusses forensic and investigative issues and innovations.

SecureNinjaTV RSA 2013 Subbu Iyer - Zscaler's ZAP. Fabricated Terrorists, Chechen-Jewish Family in Moscow Is under Threat of Murder Their Son. Mansur Edilbiev, 26, a football player, who lived in Moscow all his life, was abducted by the FSB agents, tortured in a secret cell to plead guilty in attempted blow-up a luxury train; then, a staged court trial sentenced him to 16 years in high security colony. 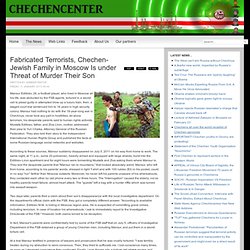 Mansur had nothing to do with the 18-year-long war in Chechnya, never took any part in hostilities, let alone terrorism, his desperate parents said to human rights activists. Mustafa Edilbiev, father, and Ziva Liron, mother, addressed their plea to Yuri Chaika, Attorney General of the Russian Federation. They also told their story to the Independent International Human Rights Group and published the facts at some Russian-language social networks and websites. Photos du journal.

Trolled by @Th3j35t3r [Explicit]: Z0ph0kl3z: Official Music. Free Music Online - Internet Radio. Music - Trolled by @Th3j35t3r - Single by Z0ph0kl3z. The Boston Bombing and Terrorism Discussion 04/19 by Joey Ortega. Featured follow Call in to speak with the host To if we discuss the Boston tragedy and what we now know about this case and those responsible. 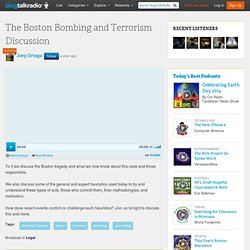 We also discuss some of the general and expert heuristics used today to try and understand these types of acts, those who commit them, thier methodologies, and motivation. How dose recent events confirm or challenge such heuristics? Tags: Dzhokhar Tsarnaev Boston Terrorism Bombings Joey Ortega h:193619s:4723327archived. Behind The Yellow Tape Online Radio by Joey Ortega. The Boston Marathon Bombing: Case Closed? Like many of you, I had little to no idea where Chechnya was, let alone its political structure and place in the larger global political narrative. 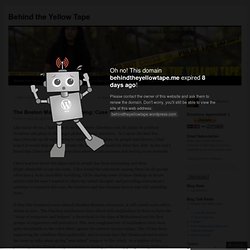 As I spent the bast few days, literally up all night trying to understand the place, its people and history, I had hoped it would help me understand why these boys would do what they did? In the end I found that I have more questions than answers and ominous sick feeling in my stomach. I have learned about this place and its people has been fascinating and their plight admirable to say the least. I also found the extremists among them (as all groups often have), to be incredibly terrifying. I’ll be sharing some of these findings in future articles but for now I wanted to share my initial thoughts and pervading concerns as I continue to research this case, the bombers and the Chechen history and still unfolding story.

If they (the bombers) were indeed Chechen Muslim extremists, it still would seem odd to attack us now. Like this: Download Trolled by @Th3j35t3r (Instrumental) by Z0ph0kl3z. Terrorism, The Internet, Organized Crime Discussion 04/26 by Joey Ortega. At What Price, Fame: The High Cost of Re-Victimization and the Steubenville Rape Case. **This post has been revised to include vital information specifically related to Facebook Private Messages shared between Joey Ortega and Alexandria “Prinnie” Goddard. 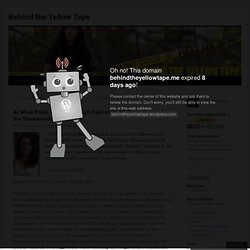 All messages are reposted with permission of their original recipient and respondent, Joey Ortega. ~by Amy Lynn Burch published on April 29, 2013 @ 10:29pm (EST) With the verdict decided and justice served, I sit here at my computer some six weeks later contemplating the potential aftermath of the Steubenville Rape case. Although, I am satisfied that the correct judgment was rendered I cannot help but wonder how much damage was done to the case and all parties involved due to social media manipulation and the meddlesome behavior of those claiming to be members of the hacktivist group “Anonymous”. JΞSTΞRS COURT – OFFICIAL BLOG. Freedom of Speech Doesn’t Sit So Well With Those Who Have Misused It. ~by Amy Lynn Burch published on May 1, 2013 @ 10:34pm (EST) I’ve been accused lately of misrepresenting myself as a registered private investigator. 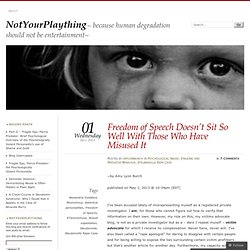 Freedom of Speech Doesn’t Sit So Well With Those Who Have Misused It ~by Amy Lynn Burch. I’ve been accused lately of misrepresenting myself as a registered private investigator. 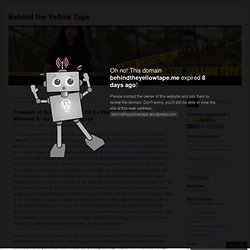 I am one, for those who cannot figure out how to verify that information on their own. Anonymous, Islamist Hackers Plan Major Assault for Tuesday. UPDATED 1 p.m. 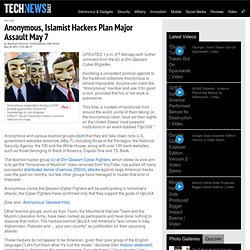 ET Monday with further comment from the Izz al-Din Qassam Cyber Brigades. Ascribing a consistent political agenda to the hacktivist collective Anonymous is almost impossible. Anyone can claim the "Anonymous" moniker and use it for good or evil, provided that his or her work is subversive. This time, a number of hacktivists from around the world, some of them taking on the Anonymous label, have set their sights on the United States' most powerful institutions in an event dubbed "OpUSA. " Anonymous and various Islamist groups claim that they will take down nine U.S. government websites tomorrow (May 7), including those of the Pentagon, the National Security Agency, the FBI and the White House, along with over 130 bank websites, such as those belonging to Bank of America, Capital One and TD Bank.

Anonymous claims the Qassam Cyber Fighters will be participating in tomorrow's attacks; the Cyber Fighters have confirmed only that they support the goals of OpUSA.