The 50 best apps for children. When Apple unveiled its iPad in January 2010, the idea of handing over a touchscreen gadget costing at least £429 to a sticky-fingered child seemed ridiculous. 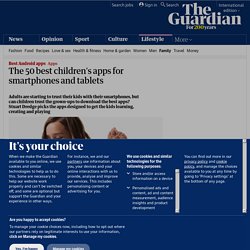 Two years later, tablets – and smartphones – are now well established as pass-on devices, with an increasing number of apps available for children of all ages. In July, Disney commissioned a survey of 2,000 British parents who owned an app-capable device and found that 75% share them with their children; 56% said they had downloaded an app at the request of their kids; and 37% considered apps to be an "integral" part of their family life. iPad Applications In Bloom’s Taxonomy. This has bubbled up in my feeds not once, but several times now. It’s an interesting graphic that actually places example iPad applications into Bloom’s levels of performance in the cognitive domain. Focussed around students, and not really workplace learning, but interesting nonetheless. 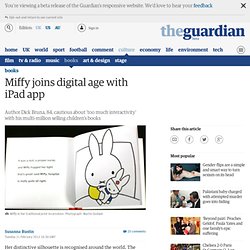 The classic children's books about her have sold tens of millions of copies and in the Netherlands she has her own museum. But as Miffy the rabbit joins the digital age with the launch of her first app on Wednesday, her 84-year old Dutch creator Dick Bruna says children should start with old-fashioned board and paper books before they move on to tablets. "I think babies and toddlers need to get used to books first, feeling the covers and turning the pages, this is part of their learning," he said.

#edpad. #edpad. The Ultimate Guide To Using iPads In The Classroom. How Students Benefit From Using Social Media 14.60K Views 0 Likes A lot of criticism has been leveled at social media and the effect it has on the way students process and retain information, as well as how distracting it can be. However, social media offers plenty of opportunities for learning and interactivity, and if you take a moment to think about it, it's not too hard to see how students benefit from using social media. 100 Web 2.0 Tools Every Teacher Should Know About 44.24K Views 0 Likes We're always trying to figure out the best tools for teachers, trends in the education technology industry, and generally doing our darnedest to bring you new and exciting ways to enhance the classroom.

5 Apps for Creating Interactive Books and ePubs on your iPad. 50 Must-Have Educational Apps. It’s time for holiday road trips and you know what that means: driving, flying, cranky kids, and… teaching opportunities! 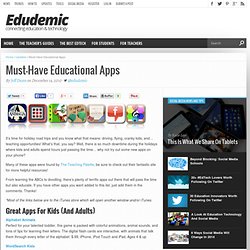 What’s that, you say? Well, there is so much downtime during the holidays where kids and adults spend hours just passing the time… why not try out some new apps on your phone? Many of these apps were found by The Teaching Palette, be sure to check out their fantastic site for more helpful resources! From learning the ABCs to doodling, there’s plenty of terrific apps out there that will pass the time but also educate. If you have other apps you want added to this list, just add them in the comments. *Most of the links below are to the iTunes store which will open another window and/or iTunes. 20 Great Classroom iPad Apps to add to your Collection (1-5) Over the last year and a half I have really enjoyed exploring the types of iPad apps that can be used in the classroom and so I thought I would begin to draw together some of my favourites and share them with you here. 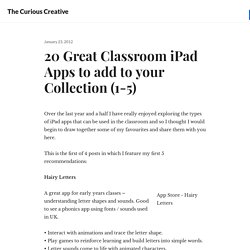 This is the first of 4 posts in which I feature my first 5 recommendations: Hairy Letters A great app for early years classes – understanding letter shapes and sounds. Good to see a phonics app using fonts / sounds used in UK. • Interact with animations and trace the letter shape. • Play games to reinforce learning and build letters into simple words. • Letter sounds come to life with animated characters. • Learn to form each letter shape with your finger. • Play games to blend letter sounds into first words. iTunes Link £1.99 Paint Sparkles A lovely free paint application that sparkles when you use it.

iTunes Link FREE Toca Store I was shown this at the Taipei European School by Glenn Malcolm – a great little app for developing role play areas in class. iTunes Link £1.49. Apps Resources. iPads and Tablets in Education. iPad for Teaching & Learning. iPad for Teaching & Learning. Brushes Gallery – iPhone/iPad Art. Top 5 iPad Apps for the Art Teacher. For Christmas I got an iPad! 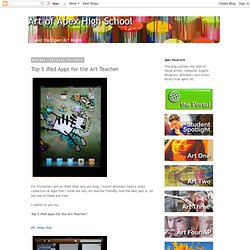 How very exciting, I know! Already I have a small collection of apps that I think are very art teacher friendly. And the best part is, all but one of these are free! I submit to you my.. Top 5 iPad Apps for the Art Teacher! #5. Note Hub lets you create a single place to store information about a project. Here is an example. Now when i need to review anything about the conference I simply open the project. iPad Apps for Primary. Some of the apps we use in school : Kenninghall Community Primary School.