(120) Prickly Pineapples: from farm to fork. (120) Crunchy Peppers: from farm to fork. Dutch courage: The little Kiwi cheese taking on the world. Since 1981, a pioneering Dutch immigrant has been developing a distinctive New Zealand style of cheese, and now the world is starting to sit up and take notice. 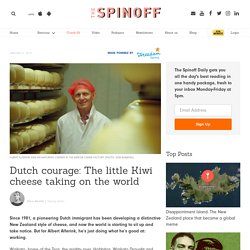 But for Albert Alferink, he’s just doing what he’s good at: working. Waikato: home of the Tron, the mighty river, Hobbiton, Waikato Draught and Jacinda Ardern. The region is also home, of course, to acre upon acre of lush green grass that’s munched by cows who produce milk that is, or so we’re told, the backbone of the nation. Yes, dairying. But put Fonterra and Big Dairy out of your mind for a minute. Video: José Barbosa The most lauded of Alferink’s cheese was until recently known as vintage gouda. (22) Whitestone Cheese - Making It New Zealand - EPISODE 24.

How can yogurt make electricity? Responsibility Feb 10, 2016 • By Grant Moos The boom in Greek yogurt has also led to a dramatic increase in waste. 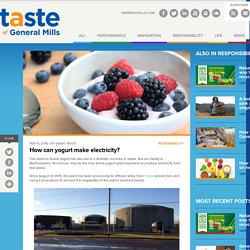 But our facility in Murfreesboro, Tennessee, may be the only Greek yogurt plant anywhere to produce electricity from that waste. Since August of 2015, the plant has been processing its leftover whey from Yoplait Greek lines and using it to produce 10 percent (1.6 megawatts) of the plant’s electrical needs. The large “anaerobic digester” on the far right is filled with Greek yogurt whey, which serves as food for self-renewing bacteria. In addition, excess heat from its biogas generator has reduced the plant’s natural gas needs by an additional 10 percent. “This is a win-win for everyone involved – from the community to General Mills,” says David Tincher, plant manager. How does it work? Greek yogurt is made from milk which has had its cream and whey separated to achieve the right protein and density. That creates the problem of significant leftover Greek whey. Favorite Veggie Burgers Recipe. Never miss a recipe. 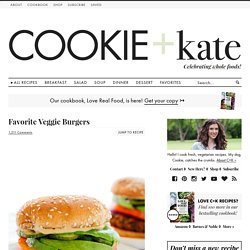 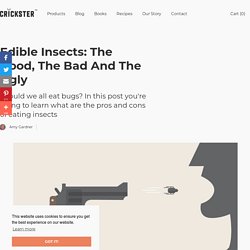 “Insects edible?” You ask. “Maybe for some people. But not for me.” It’s definitely hard to overcome our innate aversion to creepy crawly things. Insects are repulsive. Well, turns out that 80% of the world’s population would disagree with you on that. [1] The inhabitants of most parts of Asia and Africa, and even South and Central America, have included insects as a staple of their diet for generations. Despite this, relatively little is known about insects as a food source. But are they really safe to eat? Eating insects. Presenter: Every resort town in the US has a candy store, but one store in Pismo Beach, California, goes beyond the usual taffy and caramel apples. 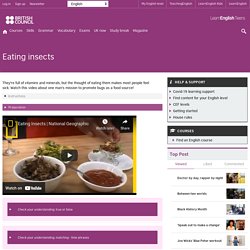 UK's favourite food to eat on Christmas Day revealed. Britain's favourite Christmas dinner ingredient has been revealed - and it's not the turkey. 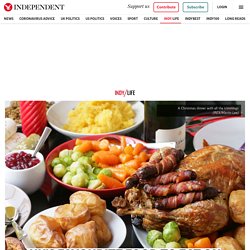 When it comes to the festive meal, most families opt for turkey with all the trimmings, followed by a mountain of Christmas pud and a good old family row. But, according to a survey of 2,000 Asda customers, the festive bird doesn’t take the top spot. Wading in at number one is perhaps the most humble of merry munchies – the traditional roast potato. Carrots took second place followed turkey, gravy, stuffing, ‘pigs in blankets’, parsnips, sprouts, Christmas pud and Yorkshire pudding.

At the bottom of the list is avocado while kale, spinach, chips and nut roast saunter slightly ahead. The survey, which marks the launch of Asda’s Christmas TV advert this week, also highlighted the 10 days of Christmas, and pointing out that December 5 is the day most of us put up our tree, decorations and watch our very first Christmas-themed movie. 7 traditional British dishes you need to try. Are you looking to try some local cuisine whilst you are studying English in the UK? 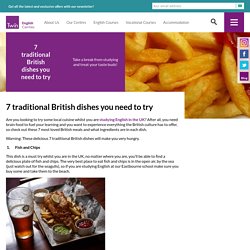 After all, you need brain food to fuel your learning and you want to experience everything the British culture has to offer, so check out these 7 most loved British meals and what ingredients are in each dish. Warning: These delicious 7 traditional British dishes will make you very hungry. 1. Fish and Chips. Scottish Food & Drink - Discover Scotland's cuisine. You are what you eat. Traditional European Food from 14 Different Countries. Europe is so much more than just ancient history, kings and queens, castles and churches. 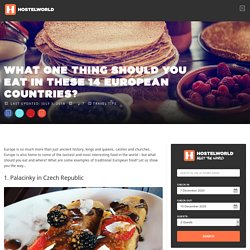 Europe is also home to some of the tastiest and most interesting food in the world – but what should you eat and where? What are some examples of traditional European food? Let us show you the way… 1. Palacinky in Czech Republic ? The Czech Republic is probably most famous for its great variety of pilsner beers, but the country also serves up some tasty Czech foods to soak up all that alcohol. Quick & Easy International Food Recipes.