Hours of Service for Motor Carriers of Passengers. The hours-of-service rules for drivers of passenger-carrying commercial motor vehicles (CMVs) are different from the rules for property-carrying CMVs. 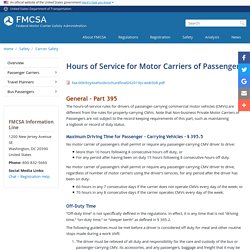 On-Duty Time – § 395.2 Travel Time – § 395.1(j) Relief Drivers. Motor Coach Canada - Hours of Service. Unplanned Stops and Special Detours: What You Should Know About Canadian Hours of Service Rules For your safety…and that of other road users, your motor coach driver’s hours of service are strictly regulated by Federal and Provincial laws. 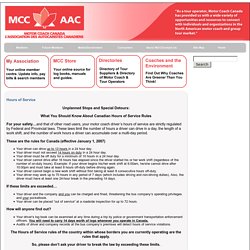 These laws limit the number of hours a driver can drive in a day, the length of a work shift, and the number of work hours a driver can accumulate over a multi-day period. These are the rules for Canada (effective January 1, 2007) Your driver can drive up to 13 hours in a 24 hour day. If these limits are exceeded… Your driver and the company and you can be charged and fined, threatening the bus company’s operating privileges and your pocketbook. How will anyone find out? Your driver’s log book can be examined at any time during a trip by police or government transportation enforcement officers.

The Hours of Service rules of the country within whose borders you are currently operating are the rules that apply. Schengen Area. Area of 26 European states without mutual border controls The Schengen Area () is an area comprising 26 European states that have officially abolished all passport and all other types of border control at their mutual borders. 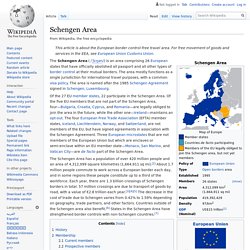 The area mostly functions as a single jurisdiction for international travel purposes, with a common visa policy. The area is named after the 1985 Schengen Agreement signed in Schengen, Luxembourg. Of the 27 EU member states, 22 participate in the Schengen Area. Of the five EU members that are not part of the Schengen Area, four—Bulgaria, Croatia, Cyprus, and Romania—are legally obliged to join the area in the future, while the other one—Ireland—maintains an opt-out. 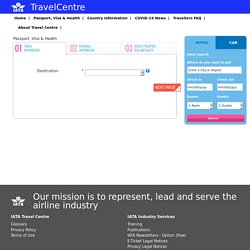 Check in Check out. Grand Tour. Journey around Europe for cultural education The custom — which flourished from about 1660 until the advent of large-scale rail transport in the 1840s and was associated with a standard itinerary — served as an educational rite of passage. 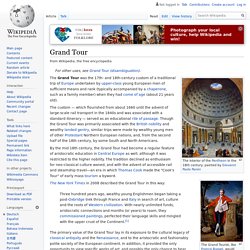 Though the Grand Tour was primarily associated with the British nobility and wealthy landed gentry, similar trips were made by wealthy young men of other Protestant Northern European nations, and, from the second half of the 18th century, by some South and North Americans. By the mid 18th century, the Grand Tour had become a regular feature of aristocratic education in Central Europe as well, although it was restricted to the higher nobility. The tradition declined as enthusiasm for neo-classical culture waned, and with the advent of accessible rail and steamship travel—an era in which Thomas Cook made the "Cook's Tour" of early mass tourism a byword. The New York Times in 2008 described the Grand Tour in this way: History[edit] Typical itinerary[edit] 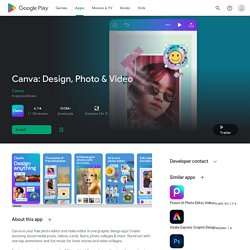