Why Some Schools Are Selling All Their iPads 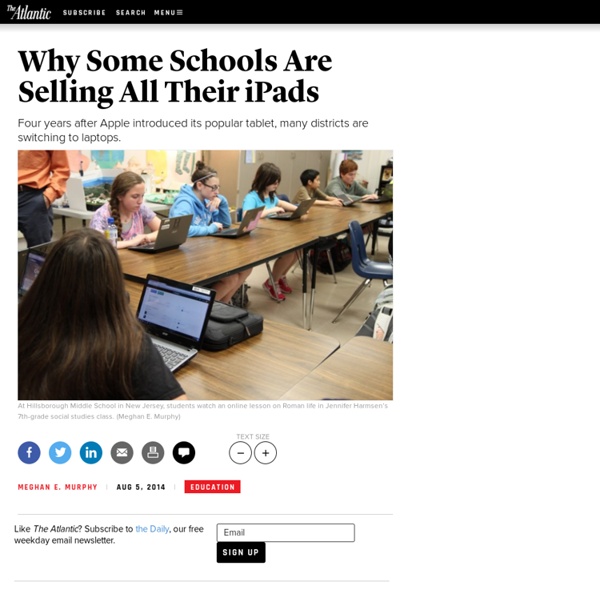 For an entire school year Hillsborough, New Jersey, educators undertook an experiment, asking: Is the iPad really the best device for interactive learning? It’s a question that has been on many minds since 2010, when Apple released the iPad and schools began experimenting with it. The devices came along at a time when many school reformers were advocating to replace textbooks with online curricula and add creative apps to lessons. Four years later, however, it's still unclear whether the iPad is the device best suited to the classroom. Meanwhile, the cost of equipment is going down, software is improving, and state policies are driving expectations for technology access. iPads have so far been a gadget of choice at both ends of the economic spectrum: in wealthier schools with ample resources and demand from parents, and in low-income schools that receive federal grants to improve student success rates. However, the L.A. district quickly recalled about 2,100 iPads from students.

How BYOD/T is Getting Easier, How it’s Getting Harder I’ve written more posts on BYOD/BYOT (Bring Your Own Device/Technology) than Sylvia Plath penned woebegone prose, so I’m going to put all of you out of your misery and promise you this is the last one. It’s been just over five school years now that I’ve invited students to bring their own wifi enabled devices into the classroom to use for learning. The first couple of years were a whirlwind of learning for everyone involved, but I can say fairly that the dust has settled quite a bit in the time since. Has it gotten easier or harder, you ask? And another thing: “easier” and “harder” aren’t exactly the most appropriate words here, but they’re as correct as one can get. Equity My experience doing BYOD has always been in relatively affluent public school communities. Stakeholder Support In the first few years of this initiative, my part-time job was as communicator and, unfortunately, evangelist for why BYOD should at least be allowed in a classroom. Apps and Software Focus and Attention

Background of the Issue - Tablets vs. Textbooks - ProCon.org (click to enlarge image) Summary of reader attitudes towards print books and e-books. Source: Pew Research Center's Internet & American Life Reading Habits Survey, "The Rise of E-Reading," libraries.pewinternet.org, Apr. 4, 2012 Publishing for the K-12 school market is an $8 billion industry, with three companies - McGraw-Hill, Pearson, and Houghton Mifflin Harcourt - capturing about 85% of this market. Proponents of tablets say that they are supported by most teachers and students, are much lighter than print textbooks, and improve standardized test scores. Opponents of tablets say that they are expensive, too distracting for students, easy to break, and costly/time-consuming to fix. 2012 marked the first time that more people accessed the Internet via smartphones and tablets than desktop or laptop computers. Students using tablets in the classroom. 43% of Americans read online books, magazines, or newspapers. Drawing of a child carrying an overstuffed backpack.

The future is here: New ed tech targets the brain Measuring and even changing a student’s brain activity was once a science fiction concept. But technology advances are pushing to market more products that use attention levels and plasticity of the mind to raise academic achievement. “I think it’s the direction we have to go in,” says Tom Kelchner, director of special education at Goose Creek CISD in Texas, a district of 22,000 students outside Houston. “We have to look at innovative approaches based on research to do something different for students who have reading and math deficits, and we feel these cognitive development programs are part of the answer.” Over the summer, the district began implementing the program Cogmed Working Memory Training from Pearson in special education classrooms. Measuring attention At the end of the study session, students can see where their attention was highest and lowest, and go back to the exact place where attention dropped. Tapping neuroplasticity

Low education makes the brain age faster Education and mental gymnastics seem to keep the brain from developing early signs of ageing, new Danish research shows. (Photo: Shutterstock) Growing old isn’t fun. Our joints and muscles get weaker and our brain and mental capacities get slower. But this happens faster for some than for others. That’s the conclusion of a new Danish study that found that people with little lose mental and cognitive abilities much faster than those who do more years at school. When the scientists looked at the participants’ educational backgrounds and lines of work and compared them with how their cognitive performances deteriorated over the years they found a considerable difference. “It seems that challenging the intellect daily counters the wear and tear of the brain brought on by ageing,” says Eigil Rostrup, consultant doctor at Glostrup Hospital and senior researcher behind the study which was recently published in the journal Human Brain Mapping. An unhealthy lifestyle isn’t the reason

Should tablets replace textbooks in K-12 schools? - Tablets vs. Textbooks - ProCon.org "Last week, Education Secretary Arne Duncan declared a war on paper textbooks. 'Over the next few years,' he said in a speech at the National Press Club, 'textbooks should be obsolete.' In their place would come a variety of digital-learning technologies, like e-readers and multimedia Web sites... ... ...With strength and durability that could last thousands of years, paper can preserve information without the troubles we find when our most cherished knowledge is stuck on an unreadable floppy disk or lost deep in the 'cloud.' The digitization of information offers important benefits, including instant transmission, easy searchability and broad distribution.

You will soon be able to run any Windows application on a Chromebook Google, VMware, and NVIDIA were on hand at VMworld 2014 to show off a collaborative effort utilizing VMware Blast Performance and NVIDIA GRID vGPU technology. The result will be high performance virtual desktops and workstation-class graphics for Chromebooks. Imagine getting hardware-accelerated graphics, and at the same time, enjoying the flexibility of a virtual environment. With the flexibility of the Chromebook, manufacturers can design complex 3D models and share them with engineers around the globe. “We are breaking down traditional barriers to adopting virtual desktops and offering new economics for the delivery of graphics-intensive applications through the power of the cloud,” said Sanjay Poonen, executive vice president and general manager, End-User Computing, VMware. Chromebooks featuring NVIDIA Tegra K1-processors will be among the first ones to get access to this technology. What do you guys think? source: VMware » See more articles by Robert Nazarian

Why Poor Schools Can’t Win at Standardized Testing You hear a lot nowadays about the magic of big data. Getting hold of the right numbers can increase revenue, improve decision-making, or help you find a mate—or so the thinking goes. In 2009, U.S. This is a story about what happened when I tried to use big data to help repair my local public schools. A few years ago, I started having trouble helping my son with his first-grade homework. “I need to write down natural resources,” he told me. “Air, water, oil, gas, coal,” I replied. “I already put down air and water,” he said. “Of course they are,” I said. “But they weren’t on the list the teacher gave in class.” I knew my son would start taking standardized tests in third grade. In essence, I tried to game the third-grade Pennsylvania System of School Assessment (PSSA), the standardized test for my state. After six months of this, I discovered that the test can be gamed. When a problem exists in Philadelphia schools, it generally exists in other large urban schools across the nation.

Tablets vs. Textbooks - ProCon.org Tablets help students learn more material faster. Technology-based instruction can reduce the time students take to reach a learning objective by 30-80%, according to the US Department of Education and studies by the National Training and Simulation Association. 81% of K-12 teachers believe that "tablets enrich classroom education." Tablets can hold hundreds of textbooks on one device, plus homework, quizzes, and other files, eliminating the need for physical storage of books and classroom materials. E-textbooks on tablets cost on average 50-60% less than print textbooks. Tablets help to improve student achievement on standardized tests. Tablets contain many technological features that cannot be found in print textbooks. Print textbooks are heavy and cause injuries, while a tablet only weighs 1-2 pounds. Tablets help students better prepare for a world immersed in technology. On a tablet, e-textbooks can be updated instantly to get new editions or information.

6 Entertaining Games Made Entirely in Microsoft Excel Excel — your friendly (and perhaps most dreaded) office tool. But it's not just for spreadsheets anymore. Believe it or not, you can turn the data-analyzing, number-cruncher into one unbelievably cool game. The Microsoft software has a few secrets up its sleeve; many people have managed to design new games or recreate classics like Monopoly from its offerings. Below, we've highlighted six games made entirely in Microsoft Excel. Note: For most of these games, you'll need to enable macros. You may have heard of the addicting game 2048 by Gabriele Cirulli. In 2048 two tiles of the same number can merge into a new tile that equals the total value of the two. The geniuses at Spreadsheet1.com built an Excel version that allows you to play the game, and track your moves to help analyze your strategy. But what if you want to play this game and be discrete at work? To download this sneaky version, click here. 2. In four days, Canadian accountant Cary Walkin created Candy Number Crunch Saga. 3. 5.

The Summer's Most Unread Book Is… - WSJ Track & Rate Skills Directly in Google Drive Track & Rate Skills Directly in Google Drive One of my favorite tools for providing feedback in Google Drive is Kaizena, which allows you to leave voice comments on documents. Today Kaizena launches an enhanced feature: tags. Here is a summary of what these new features in Kaizena can do: Track and rate skills - tags can be rubric criteria, common core standards, your local state, region, or country’s standards, learning objectives or outcomes…anything. Voice comments saved educators time while enabling better student outcomes, and tags continue this legacy: Better student outcomes Knowledge of strengths and weaknesses is a prerequisite for improvementTransparency: showing the evidence behind a rubric score builds trust between educators and students Save time Re-use your feedbackGet rubric criteria out of your head as you read Like this: Like Loading... About Jennifer Carey My name is Jennifer Carey and I am a student and educator of the human condition.