30 Profound Quotes From Eckhart Tolle That Will Change the Way You Spend Your Life - The Power of Ideas. Eckhart Tolle is a famous spiritual teacher promoting mindfulness and living in the now. 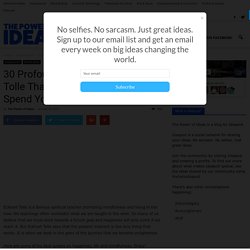 His teachings often contradict what we are taught in the west. So many of us believe that we must work towards a future goal and happiness will only come if we reach it. But Eckhart Tolle says that the present moment is the only thing that exists. It is when we bask in the glory of the journey that we become enlightened. Here are some of his best quotes on happiness, life and mindfulness. On The Present Moment “The past has no power over the present moment.” “Life will give you whatever experience is most helpful for the evolution of your consciousness. “Realize deeply that the present moment is all you have. “Time isn’t precious at all, because it is an illusion. “Always say “yes” to the present moment. On Change “Some changes look negative on the surface but you will soon realize that space is being created in your life for something new to emerge.”

On Unhappiness On Who You Are On Letting Go. Anxiety Took Over My Life. It started at the beginning of my junior year of high school in a warm, loud classroom. 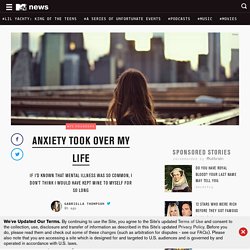 It was at that notorious point in our high school careers when it was clear that our days were numbered and the question “What are your plans for the future?” Kept banging on our doors. Like many others, I usually avoided answering that question. I thought I was doing so because I didn’t know what I wanted, but that wasn’t really true. Truthfully, I felt in the pit of my stomach that something was wrong. And then one day, I suddenly figured out what it was. I tried to ignore the uncertainty as much as I could.

I was diagnosed with depression that winter, but I tried not to let it affect me. A couple months later, I was sexually assaulted by someone I once cared for. Is There a Link Between Bipolar Disorder and Lying? Bipolar disorder is a mental illness marked by cycles of mania and depression. 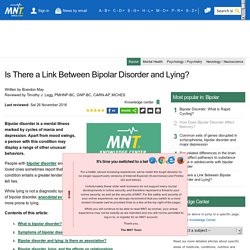 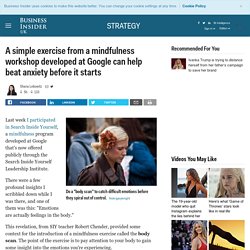 There were a few profound insights I scribbled down while I was there, and one of them was this: "Emotions are actually feelings in the body. " This revelation, from SIY teacher Robert Chender, provided some context for the introduction of a mindfulness exercise called the body scan. The point of the exercise is to pay attention to your body to gain some insight into the emotions you're experiencing.

Here's how it works: Starting at the top of your head, check in with every part of your body and notice how it feels. This might seem like kindergarten stuff — everyone over the age of five knows what anger and anxiety feel like. Think Better on Your Feet: How to Improve Your Working Memory – EXTRA JOSS. Whether you’re answering hard questions, making impromptu remarks, analyzing a situation, or synthesizing a bunch of data points into a cohesive and convincing presentation, the ability to think and process multiple pieces of information quickly and effectively is a vital skill to have. 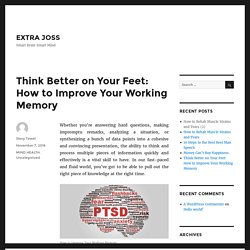 In our fast-paced and fluid world, you’ve got to be able to pull out the right piece of knowledge at the right time. Your working memory is what allows you to do that. While it was once thought that the capacity of each individual’s working memory was something they were simply born with, research from the worlds of cognitive science and psychology are showing that we can actually train it to become stronger and faster.

If you’re ready to upgrade your working memory from “six guinea pig power” to eight cylinder efficacy, today’s your lucky day. What Is Working Memory and Why Is It Important? Whenever we perform tasks that require reasoning, comprehension, and learning, we use our working memory. Fisher Wallace. The Brain Stimulator tDCS - Affordable tDCS devices.