New material converts CO2 into clean fuel with unprecedented efficiency. A new material made from microscopic layers of cobalt can convert carbon dioxide gas into formate - a fuel that can be burned with no toxic byproducts and used as a clean energy source. 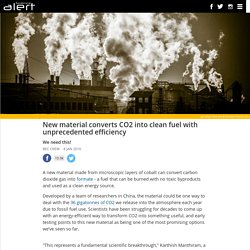 Developed by a team of researchers in China, the material could be one way to deal with the 36 gigatonnes of CO2 we release into the atmosphere each year due to fossil fuel use. Scientists have been struggling for decades to come up with an energy-efficient way to transform CO2 into something useful, and early testing points to this new material as being one of the most promising options we’ve seen so far. "This represents a fundamental scientific breakthrough," Karthish Manthiram, a chemical engineer from the California Institute of Technology who was not involved in the research, told William Herkewitz at Popular Mechanics. "Certainly it will be a years-long process before this is worked into a successful, commercial device. Sea Mollusk Sees With Hundreds Of Armored Eyes. Operation Krill - Blackmores Petition - Home. Does Water Go Bad? 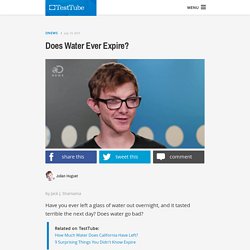 Shamama Have you ever left a glass of water out overnight, and it tasted terrible the next day? Does water go bad? Related on TestTube:How Much Water Does California Have Left? 9 Surprising Things You Didn't Know Expire Have you ever left a glass of water out and noticed it tasted different the next day? The small dip in pH doesn't present a health risk. Learn More: Shellfish Face An Uncertain Future In High Carbon Dioxide World (Science Daily)"Scientists have now discovered another serious threat to these valuable filter feeders -- rising levels of atmospheric carbon dioxide that contribute to the acidification of open ocean, coastal and estuarine waters. " Personal Preparation and Storage of Safe Water (CDC)"After an emergency, such as a flood, hurricane, or earthquake, drinking water may not be available or safe to drink.

Algae. Ocean Geology. Animation Shows 550 Million Years Of Human Evolution In Seconds. How Many Fish Are In The Ocean? By Jack J. 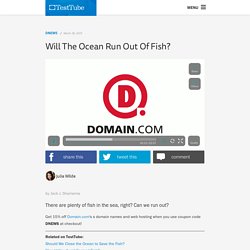 Shamama Get 15% off Domain.com's s domain names and web hosting when you use coupon code DNEWS at checkout! Related on TestTube: Should We Close the Ocean to Save the Fish? Should You Avoid Farmed Fish? "There are plenty of fish in the sea" is an idea so engrained in our minds that it's a cliché. Cod are just one of many fish populations that have been decimated by overfishing. What do you think are the best ways to prevent overfishing? Learn More: West Coast Scientists Fishing For Solutions To Bluefin Tuna Overfishing (CBS)"In the San Francisco Bay Area, no matter how you slice it, we're wild about raw fish. " Mysteries of the Oceans Remain Vast and Deep (Live Science)"June has been declared National Oceans Month, via a writ from the White House a few days ago, and this week communities around the planet will mark World Oceans Day.

" Why Packaging And Fallout Shelters Should Take Design Cues From Seashells.

Ocean chem. Cnidaria. Porifera. Top 10 Free Online Mind Mapping Tools. As the name, mind mapping means that to draw your mind or ideas as a map, which are well-known for brainstorm, exploring your brain for many ideas. 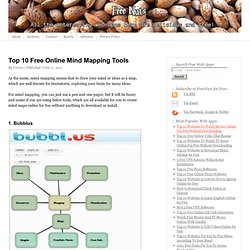 For mind mapping, you can just use a pen and one paper, but it will be funny and easier if you are using below tools, which are all available for you to create mind maps online for free without anything to download or install. 1. Bubblus Bubblus is very simple and easy to use, you just need to enter and drag. The mind maps can be exported as image, XML or HXML files, and you can also share the mind maps with your friends or embed them into your blogs. Go to Bubblus 2. The mind mapping tool Mindomo lets you search YouTube videos, add images, videos or audio with the exist URLs, upload attachment, and add a lot of symbols.

You can export the mind map as PDF, Image, RTF and some other format files. Go to Mindomo 3. You can add many interesting icons on the Mind Map with MindMeister easily. Go to MindMeister 4. Go to Mind42 5. Go to Dabbleboard 6. 7. 8. 9. 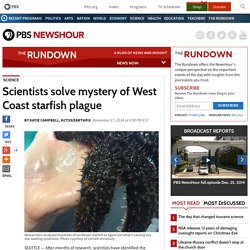 Photo courtesy of Cornell University SEATTLE — After months of research, scientists have identified the pathogen at the heart of the wasting disease that’s been killing starfish by the millions along the Pacific shores of North America, according to research published Monday. They said it’s a virus that’s different from all other known viruses infecting marine organisms. They’ve dubbed it “sea star associated densovirus.”

“When you look on a scale of hundreds and hundreds of animals, which we did, it’s very clear that the virus is associated with symptomatic sea stars,” said Ian Hewson, a microbiologist at Cornell University and lead author of the study published in the Proceedings of the National Academy of Sciences. Figuring out what brings on marine diseases is rare, especially among invertebrates. And sure enough it did.