Global politics. Excusing the men who ran away. Why do women still earn a lot less than men? The Equality of Opportunity Project. By Karen Christensen Five characteristics that impact an individual’s upward mobility. 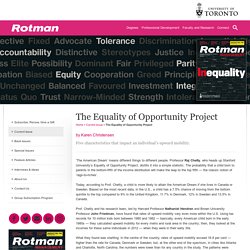 ‘The American Dream’ means different things to different people. Professor Raj Chetty, who heads up Stanford University’s Equality of Opportunity Project, distills it into a simple statistic: The probability that a child born to parents in the bottom-fifth of the income distribution will make the leap to the top fifth — the classic notion of ‘rags-to-riches’. Today, according to Prof. Chetty, a child is more likely to attain the American Dream if she lives in Canada or Sweden. Prof. What they found was startling: In the centre of the country, rates of upward mobility exceed 16.8 per cent — higher than the rate for Canada, Denmark or Sweden; but, at the other end of the spectrum, in cities like Atlanta and Charlotte, North Carolina, the numbers were lower than for any country in the study.

Saudi oil filling a New Brunswick refinery – what kind of a domestic energy policy is that? A Calgary based oil trader wishing to remain anonymous recently went on record to say that Irving Oil has “fixed the 299,235t Kamakshi Prem to ship crude on January 21 from Ras Tanura, Saudi Arabia to its 300,000 b/d refinery in St. 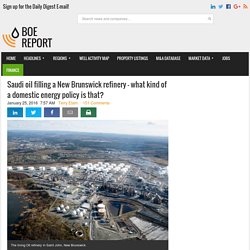 John, NB in Canada.” Yes you read that right, Canada’s largest refinery, the Irving Oil New Brunswick facility, imports oil from Saudi Arabia. Why It Takes 75 Elements To Make Your Cell Phone - Seeker - Video. That smartphone in your pocket is an incredibly complex little rectangle. 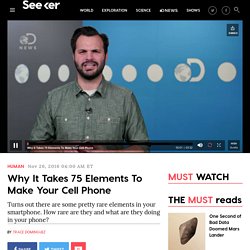 The various components required to make a cell phone work come from all over the world. In fact, the typical modern smartphone uses 75 of the 118 base elements on the periodic table. By comparison, the human body only needs about 30 functional elements. Phones need a good deal of silicon in the microchips, of course, plus aluminum in the casing and lithium in the batteries. They also require several several rare earth elements, which are notoriously difficult to mine and have led to exploitative industry practices.

Forrest: A disproportional emphasis on upstream oil and gas is not a solution for reducing GHGs. Hey, Leonardo DiCaprio: true climate champions don’t fight against urban density [Updated] From Trump to Brexit: Trust in Government Is Collapsing Around the World. On Wednesday, Facebook made an announcement that you’d think would only matter to Facebook users and publishers: It will modify its News Feed algorithm to favor content posted by a user’s friends and family over content posted by media outlets. 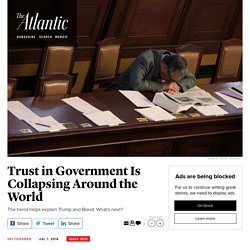 The company said the move was not about privileging certain sources over others, but about better “connecting people and ideas.” But Richard Edelman, the head of the communications marketing firm Edelman, sees something more significant in the change: proof of a new “world of self-reference” that, once you notice it, helps explain everything from Donald Trump’s appeal to Britain’s vote to exit the European Union. Elites used to possess outsized influence and authority, Edelman notes, but now they only have a monopoly on authority.

Influence largely rests with the broader population. People trust their peers much more than they trust their political leaders or news organizations. Trust in Institutions, by Income Level. Hypocrite! Leo takes private jet to collect environmental award. Leo DiCaprio picked up an environmental award in NYC this week — but hypocritically expanded his carbon footprint by 8,000 miles when he obtained the honor, by taking a private jet from Cannes, then flying straight back to France on another jet for a model-packed fund-raiser a night later. 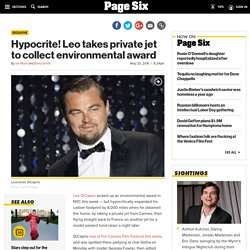 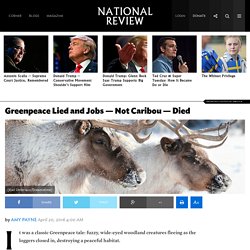 Except it wasn’t true — and this time, the lies have been exposed. What Would a Realist World Have Looked Like? Here’s a puzzle for all you students of U.S. foreign policy: Why is a distinguished and well-known approach to foreign policy confined to the margins of public discourse, especially in the pages of our leading newspapers, when its recent track record is arguably superior to the main alternatives? 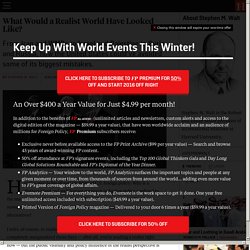 I refer, of course, to realism. I’m not suggesting that realism and realists are completely marginalized these days — after all, you’re reading a realist right now — but the public visibility and policy influence of the realist perspective is disproportionately small when compared either to liberal internationalism (among Democrats) or neoconservatism (in the GOP). Obama and the Wrong Side of History. Barack Obama has always evinced a fascination with history. 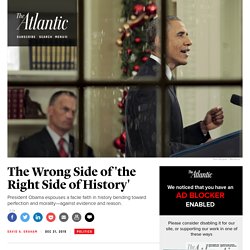 He announced his candidacy in Springfield, Illinois, recalling Abraham Lincoln. 'Wife bonuses' determined by their banker husbands. 11 etiquette rules to remember next time you fly. Bitch_this_sentence_construction_is_everywhere_why_is_it_so_powerful. Photo by Gabriel Bouys/AFP/Getty Images Here’s the setup for the one indelible line in the so-so Tina Fey–Amy Poehler comedy Baby Mama. 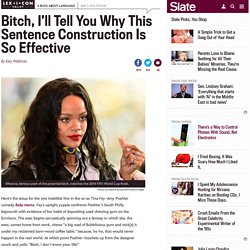