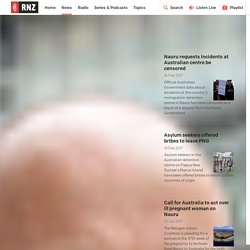 John James Te Moananui, a detainee in Perth who signed up for the legal action, said his phone was his "lifeline", but he feared ultimately they would lose the fight and that could spark trouble. Before that, he had two spells totalling five months in detention on Christmas Island where cellphones were banned after a riot 18 months ago. Asylum seekers detained in Australia can keep phones for now, court rules. Refugee advocates say about 80 asylum seekers won’t lose their mobile phones following an injunction stopping Australian Border Force staff confiscating them. 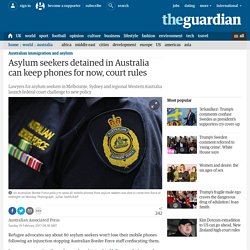 Lawyers representing the asylum seekers detained in Melbourne, Sydney and regional Western Australia had launched a federal court challenge to the ABF’s new policy of seizing all detainees’ phones. It was set to come into effect at midnight on Monday but the injunction granted on Sunday afternoon will allow asylum seekers to keep their phones until the case can be heard properly. The Refugee Action Coalition called the decision a “great relief”. Refugee advocate Pamela Curr said male asylum seekers in Melbourne had been “very anxious and distressed” at the thought of being forced to give up their phones.

“Border Force are making it harder and harder for people in detention to have contact with the outside,” she said. Detention centre land lines were difficult to access because of the language barrier and the need for a phone card. Junk Explained: Why Is Australia Is Locking Up Record Numbers Of New Zealanders? - Junkee. The number of deportations has increased ten fold since Peter Dutton took over. 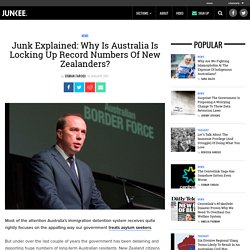 Most of the attention Australia’s immigration detention system receives quite rightly focuses on the appalling way our government treats asylum seekers. But under over the last couple of years the government has been detaining and deporting huge numbers of long-term Australian residents. New Zealand citizens currently make up the largest group being deported. Australia’s hardline approach has been criticised by the New Zealand government. The former Prime Minister of New Zealand, John Key, raised the issue with Malcolm Turnbull back in 2015 and the country’s Labour opposition has called on the government to take the issue even more seriously. 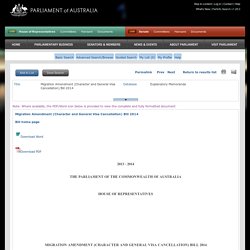 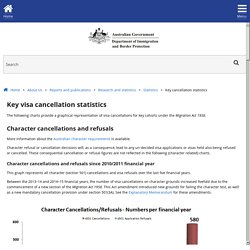 Fact Sheet - The Character Requirement. ​Everyone who wants to enter or stay in Australia must satisfy the character requirement as set out in Section 501 of the Migration Act 1958 (the Act). 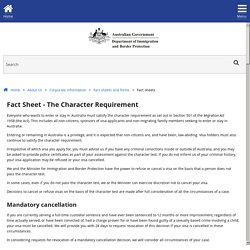 This includes all non-citizens, sponsors of visa applicants and non-migrating family members seeking to enter or stay in Australia. Entering or remaining in Australia is a privilege, and it is expected that non-citizens are, and have been, law-abiding. Visa holders must also continue to satisfy the character requirement. Irrespective of which visa you apply for, you must advise us if you have any criminal convictions inside or outside of Australia, and you may be asked to provide police certificates as part of your assessment against the character test. Serco Guide by Leigh Josey. Sub 42. Key-Turnbull: How to get out from under the detention centre shadow. The New Zealanders languishing in Australian detention centres are a stone in the shoe of the first John Key-Malcolm Turnbull meeting this weekend, but there are face-saving ways Turnbull could cut Kiwis some slack When Malcolm Turnbull touches down in New Zealand tomorrow night for his first visit as Australian Prime Minister, there will be much back-slapping and bonhomie between two very similar politicians. 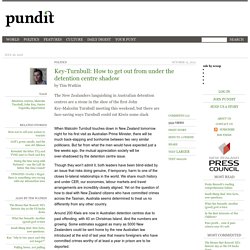 But far from what the men would have expected just a few weeks ago, the mutual appreciation society will be over-shadowed by the detention centre issue. Though they won't admit it, both leaders have been blind-sided by an issue that risks doing genuine, if temporary, harm to one of the closes bi-lateral relationships in the world. We share much history and under CER, our economies, labour markets and travel arrangements are incredibly closely aligned. Around 200 Kiwis are now in Australian detention centres due to past offending, with 40 on Christmas Island. 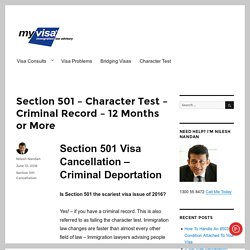 Yes! – if you have a criminal record. This is also referred to as failing the character test. Immigration law changes are faster than almost every other field of law – Immigration lawyers advising people with criminal records need to be very alert to recent changes and policies. Section-501-visa-cancellation-actions-by-minister.

How your Criminal Convictions can affect your Visa Application - Migration Downunder. Disclose! 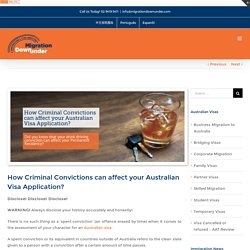 Disclose! Disclose! WARNING! Always disclose your history accurately and honestly! There is no such thing as a ‘spent conviction’ (an offence erased by time) when it comes to the assessment of your character for an Australian visa. A spent conviction or its equivalent in countries outside of Australia refers to the clean slate given to a person with a conviction after a certain amount of time passes. Typically after seven years a person is “taken” or ‘deemed’ not to have any convictions against their name if there have been no further offences proved. 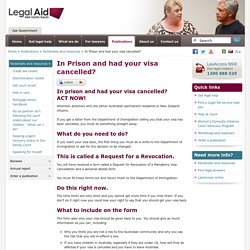 Peihopa is one a growing number of victims of Australia’s brutal immigration laws. Despite having lived in Australia for 27 years, Rob’s life came to an end inside the Villawood Immigration Detention Centre in Sydney. Several years ago, Rob was convicted for traffic offences following a police chase. Rob Peihopa’s tangi (funeral) in West Auckland, 14 April 2016. Speaking on Maori TV in October last year, Rob said immigration officials “told me 10 days out before my release that my visa had been cancelled, and the day of my release I was picked up by immigration.” Key-Turnbull: How to get out from under the detention centre shadow. Character Issues or Convicted of a Criminal Offence. The Department of Immigration can refuse your visa application or cancel your visa if they find that you fail the character test. You will fail the character test if you have committed a serious criminal act or have been involved in activities that reflect negatively on you as a person.

In July 2012, the Minister published new guidelines on character cases which make it easier for the Department to refuse visa applications or cancel visas on character grounds. This makes it even more important to seek expert advice and assistance if your character is an issue. Ease-a visa cancellation. Ease-a visa cancellation The process of obtaining a visa is lengthy, as is the process of cancellation. Having your visa cancelled, either by request or involuntarily by the Department of Immigration and Citizenship, is serious as it can mean detention and removal from Australia. Flood of Kiwi criminals expected to return home. Deporting Non-Citizens Who Commit Crimes. Visa Cancellation Criminal Conviction Character Grounds - Boyd Migration & Legal. The first step in the visa cancellation process is the issue of a Notice of Intention to Consider Cancellation (NOICC).

This is a procedural fairness instrument setting out the grounds for cancellation and inviting the visa holder to provide reasons why the visa should not be cancelled. Before a NOICC is issued, the visa holder will usually receive an email or letter requesting consent to be sent correspondence via email address. There will be a 5 day period given to respond to the email, failing which a letter will sent to a residential address on file. However, we have had clients who have received the consent email and then received the NOICC before the 5 day response period expires. We suspect that the DIBP will use email if that email has been used recently as a point of contact with DIBP. Manning Lawyers – Providing Quality, Cost Effective Legal Services – Status if an Australian Visa is cancelled.