Katehon think tank. Geopolitics & Tradition. It’s very fashionable nowadays for people to criticize the Kremlin for incompetency, and its recent history of controversial decisions coupled with... 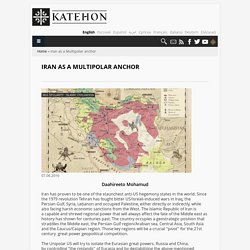 A historical explanation. The disease is the Western world, and the cure is called Russia, although not Yeltsin's Russia, but Putins. For Yeltsin was... Russia has announced its military presence in Iran for the first time since the end of World War II. 16.08.2016 Tu-22M3 Russian strategic bombers... Turkey crosses into Syria: Unipolar Conspiracy or Multipolar Coordination? - Fort Russ. August 24, 2016 - It’s very fashionable nowadays for people to criticize the Kremlin for incompetency, and its recent history of controversial decisions coupled with the suspected liberal fifth-and-six-column infiltration of key national institutions gives plenty of ground for this, but sometimes people jump the gun, such as when accusing Russia of being ‘duped’ by Turkey. 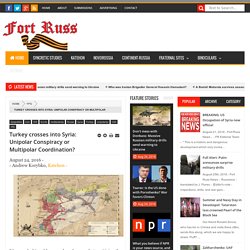 It’s interesting that no such criticisms are publicly leveled against Iran despite Tehran bending over backwards to Ankara during and after the failed pro-US coup attempt against Erdogan, but double standards are the norm when people engage in diatribes, and it’s always been the case that Russia has caught much more flak than anyone else whenever multipolar commentators critique their own camp. Mediatized Mendacity: 'Coup' de la Quatrieme Pouvoir? (with image) · SuaveBel. Right of Return: Neo-Ottoman Time Travelers (with image) · SuaveBel.

Mixed Sentiments - pt 3 - of The Myth of Capital (with images) · SuaveBel. Such a place is Lycia, an ancient territory part of the vast continuum of Anatolia civilization that stretches from the most distant recorded past through to the modern era. 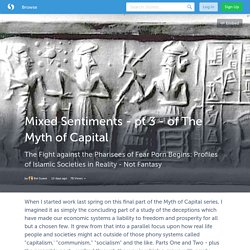 I have enjoyed time spent wandering in the part of the Taurus Mtn range here it mets both Caria and Phrygia, places of antiquity where the ruins of cities and temples abound, and close by to where renowned names such as Anaximander & Diogenes speculated upon our universe and its origins. For one curious to examine the alleged phenomena of ‘progress’ the vantage point is uniquely auspicious. In this unfrequented, out of the way part of what is now called Turkey, time seems to have stood unusually still.

Moral Sentiments - part one - The Myth of Capital (with images) · SuaveBel. Of course Smith was not alone in this project to redirect social values in a manner favorable to the interests of the commercial classes – a small but emerging part of European society which had designs of its own upon the power and privilege of the landed gentry. 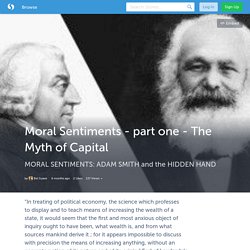 He was but part of a continuum of thinkers which from John Locke through to Hume, and then the Scottish Enlightenment circle of which he himself was a member, whose emphasis would be upon the connections between individual liberty, private property and the sanctity of both work and saving. Myth(s) of Capital(the preamble!) (with image) · SuaveBel. Yet, having given myself the task of following up on the last story with one titled "The Myth of Capital," I've spent the intervening time circling around it, like a matador testing the reflexes, gauging the strength of an angry and dangerous bull ... maintaining an appropriate distance. 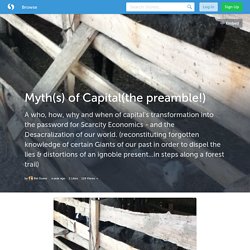 And I'll admit to feeling some trepidation about the task. Not for brazenly proposing it as the natural next step from looking in on the magical underpinnings of modern finance... I knew this one would be a stretch from the outset. Rather, it's more likely I'm feeling the weight of what it will mean to sunder ties with the form of addressing such topics. I've been happy to take on the role of "journalist" in many of the stories here so far - and done a credible job, I don't mind saying, of performing as such; appearing in the guise of a scholar has not intimidated me either, where necessary. The Devious Dervishes of Turkish Banking: part two (with images) · SuaveBel. While I could earn around 10% with my paper savings in a lira time deposit, to me it was important to be gradually switching all my fiat assets into some form of hard asset. 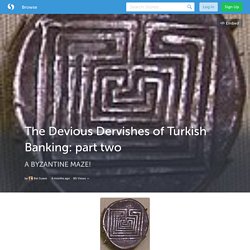 By buying the Meskuk and Ziynet coins produced by the State Mint I had a widely recognizable and easily convertible store of asset, with little premium over the cost of minting since the Turkish mint produces the largest number of gold coins in the world. The Ziynet has a more decorative function, often sold with an brass hook soldered on for threading onto a chain to make a bracelet. The ¼ Ziynet is a common gift for weddings and other occasions.

The Meskuk, derived from an Arabic word for coin, comes in four different sizes, from 1.8 to 36 grams, is issued with a year date that is based upon the year of the Republics’ founding, 1923. Both Meskuk and Ziynet are legal tender, though the face value is not recorded on the coin, and both have a purity of 91.66 or 22 karat. The Devious Dervishes of Banking: Part One (with image) · SuaveBel. The purposeful representation of emerging trends in geo-politics as a kind of WWW wrestling cage match has not to date undergone any careful inspection or critique. 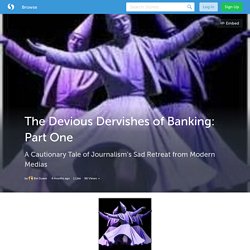 The Devious Dervishes of Banking: Part One (with image) · SuaveBel.