The Power of Words: How Words Affect Your Energy 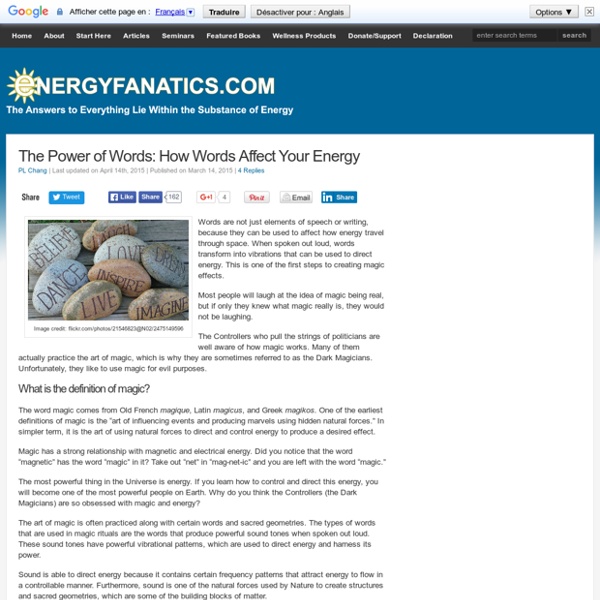 Image credit: flickr.com/photos/21546823@N02/2475149596 Words are not just elements of speech or writing, because they can be used to affect how energy travel through space. When spoken out loud, words transform into vibrations that can be used to direct energy. This is one of the first steps to creating magic effects. Most people will laugh at the idea of magic being real, but if only they knew what magic really is, they would not be laughing. The Controllers who pull the strings of politicians are well aware of how magic works. What is the definition of magic? The word magic comes from Old French magique, Latin magicus, and Greek magikos. Magic has a strong relationship with magnetic and electrical energy. The most powerful thing in the Universe is energy. The art of magic is often practiced along with certain words and sacred geometries. Sound is able to direct energy because it contains certain frequency patterns that attract energy to flow in a controllable manner. The power of words

Bone Breathing: Making Your Breath Reach the Bones “Remember to breathe. It is, after all, the secret of life.” ~ Gregory Maguire Prana or life force is the vital energy that keeps the body alive, 9 Mind-Bending Epiphanies That Turned My World Upside-Down Over the years I’ve learned dozens of little tricks and insights for making life more fulfilling. They’ve added up to a significant improvement in the ease and quality of my day-to-day life. But the major breakthroughs have come from a handful of insights that completely rocked my world and redefined reality forever. The world now seems to be a completely different one than the one I lived in about ten years ago, when I started looking into the mechanics of quality of life. It wasn’t the world (and its people) that changed really, it was how I thought of it. Maybe you’ve had some of the same insights.

9 Ways to Protect Yourself from Negative Energies 1. Crystals It is common for people to be skeptical about the healing power of crystals, but one should just turn to science and technology to find proof that crystals are objects of measurable effect. Crystals are used in many objects we use every day including silicon, which is used in all computers and mobile phones and LCD’s, and quartz, a silicate material used in watches and clocks to regulate time. When you consider all of these applications, the effect of crystals on outside energies is undeniable. Many crystals, especially darker colored ones such as black onyx, obsidian, amethyst, fluorite and tigers eye, repel negative energies and will cleanse your aura.

TheCarlaFoxBlog: Entanglements All humans entangle with others to some extent. It is a natural byproduct of our daily interactions, in addition to being a byproduct of life in physicality. We have dropped down in vibration to be here for our learning experience, and are living under the illusion that we are damaged, incomplete and out of touch with our divine essence. So what do we do when we feel that we don’t have the complete package, so to speak? We expect someone else to fill in our missing pieces. Mind Over Matter: Princeton & Russian Scientist Reveal The Secrets of Human Aura & Intentions – The Mind Unleashed A Russian scientist has been studying the human energy field and is claiming that people can change the world simply by using their own energy. While this idea is not new, not too many have taken the time to scientifically go about proving such ideas -although the field of quantum physics has shed some powerful light on the topic over the years. Dr. Konstantin Korotkov, professor of physics at St.

Human Farming And The Harvesting Of Human Energy Chevron’s motto “Human Energy” is a clue to the ultimate purpose of the NWO conspirators: to trawl the human farm for energy, using people like cattle. By Makia Freeman, contributor for ZenGardner.com Human Farming – Stefan Molyneux – The Story of Man’s Enslavement In many ways, living on Planet Earth is like living on a human farm. Meaning of Colors All living things are surrounded by an aura, which is an oval-shaped, colored band of sound, light and vibration. The human aura is also sometimes referred to as a psychic energy field. Each of the aura colors represent a person’s mood or physical health and also reflect the condition of their chakras. The major colors associated with the aura are red, orange, yellow, green, blue-indigo and violet. However, there are many variations on those colors. Some are more intense or less intense, or are deeper or lighter in color.

Time Might Only Exist in Your Head. And Everyone Else’s Past. Present. Future. In physics, they are all the same thing. But to you, me, and everyone else, time moves in one direction: from expectation, through experience, and into memory. This linearity is called the arrow of time, and some physicists believe it only progresses that way because humans, and other beings with similar neurological wiring, exist to observe its passing. The Forbidden Secrets of Water: How Water Can Raise Your Frequency Flickr Commons: Image provided by Frédéric Dupont Is there more to water than meets the eye? If you study water beyond conventional methods, you may realize that water is intelligent in nature and has its own way of communicating with other elements. Do you need proof of this? The YouTube video below will show you evidence that water isn’t a dead element, but it’s alive in its own ways and even has the ability to store memory! For something to be alive, it needs to have consciousness.