The Rescued Film Project. Photo: 1900 - 1939. Hidden Camera Used to Photograph Olso in the 1890s. These days, when it's so easy to sneak a hidden photo with your phone, we can forget just how unusual candid photography was during the 19th century. With technological limitation, our first photographs are mainly seated posed images that somehow give the impression that everyone in the 1800s was elegant and composed. But, thanks to one clever Norwegian student, we have a hidden glimpse of life in the 1890s. Carl Størmer (1874-1957) was a young student of mathematics when he purchased his first hidden camera. It was so small that the lens fit through the buttonhole in his vest with a cord that led down to his pocket, allowing him to secretly snap away. History Lovers Club. 53 Of The Most Powerful Images Of Women Protesters Of All Time.

Women have had hundreds upon hundreds of reasons to carry protest posters since the dawn of time, whether it was for voting rights, reproductive rights, or most recently, against sexual predators holding powerful positions. 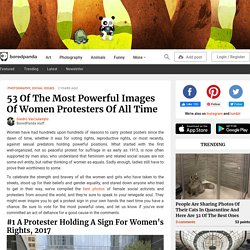 What started with the first well-organized, not so peaceful protest for suffrage in as early as 1913, is now often supported by men also, who understand that feminism and related social issues are not some evil entity, but rather thinking of women as equals. Sadly enough, ladies still have to prove their worthiness to some. To celebrate the strength and bravery of all the women and girls who have taken to the streets, stood up for their beliefs and gender equality, and stared down anyone who tried to get in their way, we've compiled the best photos of female social activists and protesters from around the world, and they're sure to speak to your renegade soul.

They might even inspire you to get a protest sign in your own hands the next time you have a chance. 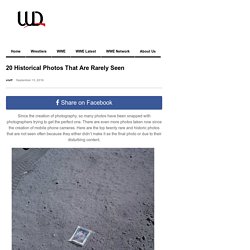 There are even more photos taken now since the creation of mobile phone cameras. Here are the top twenty rare and historic photos that are not seen often because they either didn’t make it as the final photo or due to their disturbing content. space.com 1.) Photo.sf.co.ua 2.) These 15 Rare Historical Photos Will Make You Yearn For The Days Of Yore. Attention history teachers everywhere: If you want to wake those sleeping kids, show them these 15 rare photos from the past. 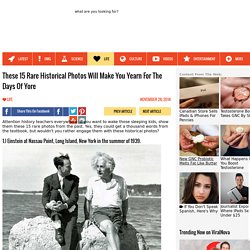 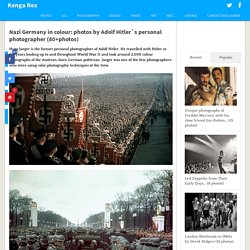 He travelled with Hitler in the years leading up to and throughout World War II and took around 2,000 colour photographs of the Austrian-born German politician. Vintage Colorized Photos (24 pics) Vintage Colorized Photos (24 pics) Ziegfeld Follies Beauties of the 1920s (26 photos) London Skinheads in 1980s by Derek Ridgers (16 photos) Photos by Stanley Kubrick for Look Magazine from the 1940s (21 photos) Shoe Shine Boys (Vendor) – 1947. 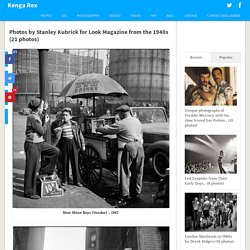 13 Great Cities Then and Now. The Flowering of the Hippie Movement (50+ photos) Historical Photos Vol.7. 20 Cities at War… (20 photos) End Of the Russian Empire: Photos Of The Romanovs’ Last Days (45 photos) 18 Odd and Weird Vintage Pictures. 29 rare photos of WWI. The Dark Side Of The Circus: 35 Photos of Vintage Freak-Show Performers. 15 Fake photos that virally fooled millions of people… Part 2 (31 pics) 30 Captivating Historical Photographs You Need to See. The best old photos are the ones you can look at for hours at a time. 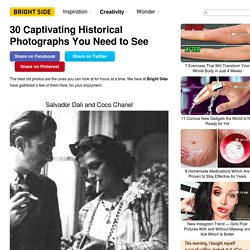 21 Rare Historical Photos You’ve Probably Never Seen. 1907-1915: Russia Before the Revolution, in Color. See the Faces of Immigrants in 1917 America. An expansive photo record of Native American life in the early 1900s. Born on a Wisconsin farm in 1868, Edward Sheriff Curtis grew up to become a commercial photographer in Seattle. 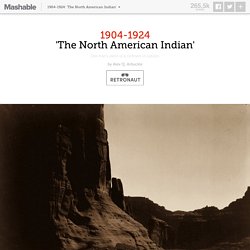 In 1895 he photographed Princess Angeline, the daughter of the Duwamish chief Seattle, for whom the city was named. That encounter sparked Curtis' lifelong fascination with the cultures and lives of Native American tribes. He soon joined expeditions to visit tribes in Alaska and Montana. In 1906, Curtis was approached by wealthy financier J.P. Morgan, who was interested in funding a documentary project on the indigenous people of the continent. With Morgan’s backing, Curtis spent more than 20 years crisscrossing North America, creating over 40,000 images of more than 80 different tribes.

In his efforts to capture and record what he saw as a vanishing way of life, Curtis sometimes meddled with the documentary authenticity of his images.