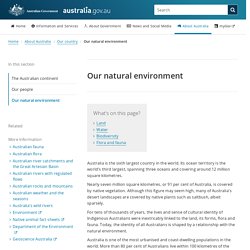 Its ocean territory is the world's third largest, spanning three oceans and covering around 12 million square kilometres. Nearly seven million square kilometres, or 91 per cent of Australia, is covered by native vegetation. Although this figure may seem high, many of Australia's desert landscapes are covered by native plants such as saltbush, albeit sparsely. For tens of thousands of years, the lives and sense of cultural identity of Indigenous Australians were inextricably linked to the land, its forms, flora and fauna. Today, the identity of all Australians is shaped by a relationship with the natural environment. Australia is one of the most urbanised and coast-dwelling populations in the world. 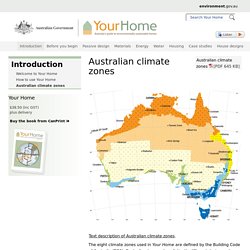 The eight climate zones used in Your Home are defined by the Building Code of Australia (BCA). Each climate zone has distinctly different design and construction requirements. Within each main zone are many regional sub-zones determined by local geographic features including wind patterns and height above sea level. The Nationwide House Energy Rating Scheme (NatHERS) identifies 69 of these sub-zones, which the BCA addresses and which can be called up by postcode. Source: Australian Building Codes Board A map of Australia shows eight climate zones as follows: China: climatic regions - Students. 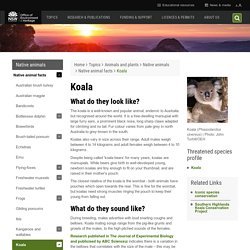 The koala is a well-known and popular animal, endemic to Australia but recognised around the world. It is a tree-dwelling marsupial with large furry ears, a prominent black nose, long sharp claws adapted for climbing and no tail. Fur colour varies from pale grey in north Australia to grey-brown in the south. Koalas also vary in size across their range. Adult males weigh between 4 to 14 kilograms and adult females weigh between 4 to 10 kilograms. Smithsonian's National Zoo. As few as 1,864 giant pandas live in their native habitat, while another 300 pandas live in zoos and breeding centers around the world. 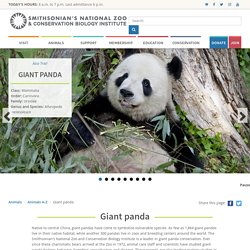 The largest threat to giant panda survival is habitat destruction. People in need of food and income have cleared forests for agriculture and timber. This logging has fragmented a once continuous habitat, leaving small groups of pandas isolated from each other. When populations become small, they are extremely susceptible to extinction due to environmental or genetic influences, such as drought or inbreeding. 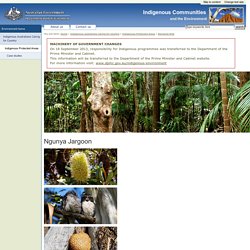 Stretching over 1,114 hectares of the Lower Richmond Valley on the northern coast of New South Wales, Ngunya Jargoon Indigenous Protected Area is a refuge for an extraordinary number of plants and animals. Part of the traditional homelands of the Bundjalung people of Ballina and Cabbage Tree Island, Ngunya Jargoon itself is of particular significance to the Nyangbul clan group. This natural oasis lies in a region suffering from fragmented habitat due to historic land clearing. It is the last remaining intact native area on the lower Richmond floodplain and contains heath and woodlands, rainforest and eucalyptus forest. Bingil Creek, flowing along the eastern side of the protected area, is in near-pristine condition.

More than 400 native plant species are found here, many of which the Bundjalung people used for food, medicine and tools. Download this page as the Ngunya Jargoon fact sheet (PDF - 1.18 MB) Introduction. The Australian Curriculum: Geography has themes for each stage of schooling. 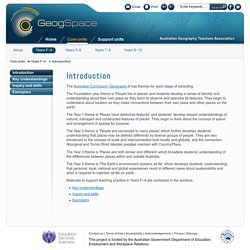 The Foundation year theme is 'People live in places' and students develop a sense of identity and understanding about their own place as they learn to observe and describe its features. They begin to understand about location as they make connections between their own place and other places on the earth. The Year 1 theme is ‘Places have distinctive features’ and students’ develop deeper understandings of natural, managed and constructed features of places. They begin to think about the concept of space and arrangement of spaces for purpose. The Year 2 theme is ‘People are connected to many places’ which further develops students’ understanding that places may be defined differently by diverse groups of people. Creately.