Scientists transform sunlight into a liquid fuel that can be stored for 18 years. It's hard to believe that we still use climate change-inducing fossil fuels when we have a sun that's bombarding our planet with plentiful, clean renewable energy on a daily basis. 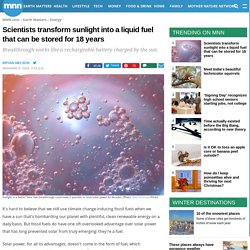 But fossil fuels do have one oft-overlooked advantage over solar power that has long prevented solar from truly emerging: they're a fuel. Solar power, for all its advantages, doesn't come in the form of fuel, which essentially means it can't be stored as easily. That could soon change, however, after a breakthrough development of a fuel capable of capturing and storing the sun's energy, and scientists are saying this fuel can store that energy for up to 18 years, reports NBC. Elon Musk's huge battery in South Australia made $1 million in profit in just a few days. In Brief The 100MW battery Tesla built in South Australia is proving to be profitable for its owner, Neoen, earning the company an estimated $800,000 over the course of just two days. 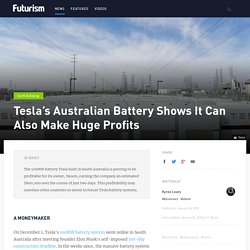 This profitability may convince other countries to invest in future Tesla battery systems. A Moneymaker On December 1, Tesla’s 100MW battery system went online in South Australia after meeting founder Elon Musk’s self-imposed 100-day construction deadline. In the weeks since, the massive battery system has seemingly lived up to its potential as a reliable source of clean energy. Now, the giant Australian battery has begun to prove its financial worth.

China homes in on hydrogen – cH2ange. How did you first get involved in hydrogen energy? 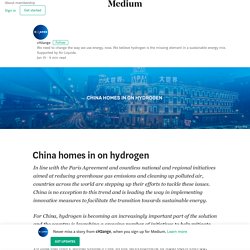 I first started working in nuclear chemistry for 19 years. But when I came back to China to join the Institute of Nuclear and New Energy, at Tsinghua University (INET) in 1993 after completing a doctorate in chemical engineering in the UK, the situation was very difficult. The leader of INET asked me to find a new direction for the Institute.

I spent three months of intensive hydrogen research and comparison, which confirmed that this new direction should be leading towards working on the field of future energy: hydrogen and fuel cells, which I’ve been working on for the past 24 years. How has your research changed over the years? At first, it was very difficult for me to conduct research because I was only able to secure a small research fund of 50,000 RMB ($7,700). There are two main ways that hydrogen is used to store energy. Can you tell us more about the UNDP-GEF-MOST project? Off Grid Saltwater Battery Can Power Home for 10 Years! Off Grid Salt Water Battery Aquion Energy has developed a non-toxic off-grid solar battery that can last a household over 10 years! 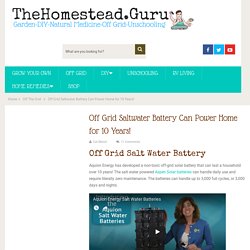 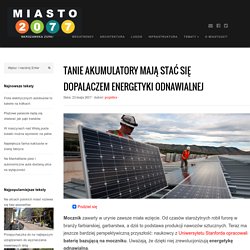 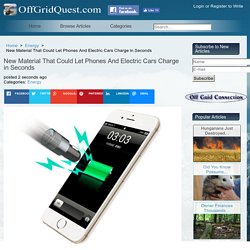 Their finding may lead to high energy density super-capacitors, making it possible to recharge mobile phones, laptops, and tablets in a matter of seconds. Super-capacitors are believed to be 1,000-10,000 times more powerful than the existing battery alternatives. New alternative would be safer, faster charging, and more efficient They could charge laptops, smartphones and tablets in seconds Tech could lead to electric cars which fully recharge in seconds New material has a higher energy density than any previous super-capacitor.

Harvard's Remarkable New Battery Can Run For More Than a Decade. In Brief. 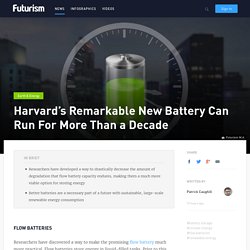 New approach for storing energy could make solar farms less costly. A visit to a commercial solar energy farm anywhere in the world reveals the need for matching the variable electric supply generated by the farm's solar panels to the electricity needs of different clients. 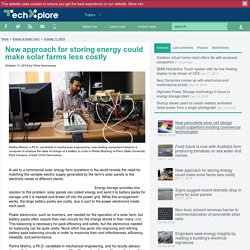 Energy storage provides one solution to this problem: solar panels can collect energy and send it to battery packs for storage until it is needed and drawn off into the power grid. While this arrangement works, the large battery packs are costly, due in part to the power electronics inside each pack. Power electronics, such as inverters, are needed for the operation of a solar farm, but battery packs often require their own circuits for the charge stored in their many cells. This balancing is necessary for pack efficiency and safety, but the electronics needed for balancing can be quite costly. Making high-performance batteries from junkyard scraps. Take some metal scraps from the junkyard; put them in a glass jar with a common household chemical; and, voilà, you have a high-performance battery. 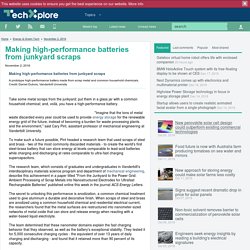 "Imagine that the tons of metal waste discarded every year could be used to provide energy storage for the renewable energy grid of the future, instead of becoming a burden for waste processing plants and the environment," said Cary Pint, assistant professor of mechanical engineering at Vanderbilt University. Researchers Develop a Cheap Battery to Power Your House—and It’s Organic. Here’s a dirty little secret about the batteries we increasingly rely on to power our emissions-free cars and store clean, green energy from the sun and wind: They contain metals that must be mined and can contaminate groundwater if they end up in landfills. 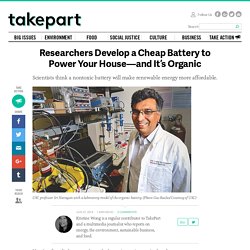 But an eco-friendly alternative could be coming soon. Researchers at the University of Southern California have developed a first-of-its-kind battery that replaces metal catalysts with quinone—an organic molecule that stores and transfers energy and can be found in fungi, bacteria, and even our bodies. What is the Tesla Powerwall? - dummies. By Ashley Watters, Abshier House The Tesla Powerwall is a battery pack designed for your home. This lithium-ion battery can be used as an alternative for powering your home. Depending on your needs and goals, you can utilize the Tesla Powerwall to power your home at night with built-up solar energy, use as a backup, or even develop a system to go off-grid.

Intended for daily cycle activities, the $3,000 Tesla Powerwall gives you options for powering your home. Each Powerwall battery is capable of storing 6.4 kWh of power. There are three options for using the Powerwall. These barrels collect water off the roof where it heats up warming the greenhouse in the winter. Home battery storage to 'revolutionise' solar industry in Australia: Climate Council report. Posted Categories: Energy For custom Web design needs, call Tech Distress (Click Here)! When trying to choose the best energy solution for your off grid home, it is important to look at what is available in the market and weigh all the options, we need to take on account many factors before buying any kind of unit or energy system, whether it will be solar or other.

Here is something that is being done in Australia that might be of interest to you. Off Grid Saltwater Battery Can Power Home for 10 Years! Posted Categories: Energy The batteries allow the user to have a more steady supply of solar power and to store all energy that comes in throughout the day, none of it to go to waste. The batteries provide power during storms and outages, and can weather almost any storm. Zedfactory.