The Infinite Jukebox. The 25 Highest Earning Youtube Stars. 2010s in music. Every Noise at Once - indietronica. Is Music Getting More Energetic Over Time? (This post originally appeared here.) 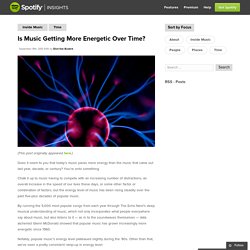 People Liked Their Music Fastest in the ‘80s. (This post originally appeared here.) 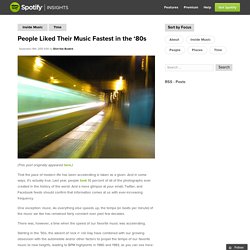 That the pace of modern life has been accelerating is taken as a given. And in some ways, it’s actually true. Acoustic Instruments: A Tale of Two Millennia. (This post originally appeared here.) 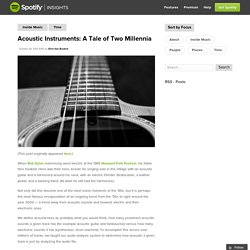 When Bob Dylan notoriously went electric at the 1965 Newport Folk Festival, his folkie fans freaked. Here was their hero, known for singing solo in the Village with an acoustic guitar and a harmonica around his neck, with an electric Fender Stratocaster, a leather jacket, and a backing band. (At least he still had the harmonica.) Not only did this become one of the most iconic moments of the ’60s, but it is perhaps the most famous encapsulation of an ongoing trend from the ’50s to right around the year 2000 — a trend away from acoustic sounds and towards electric and then electronic ones. As The Beat Goes On, It Gets More Accurate. 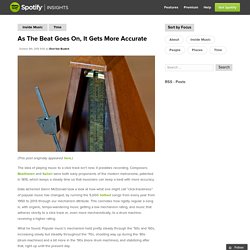 The idea of playing music to a click track isn’t new; it predates recording. Composers Beethoven and Salieri were both early proponents of the modern metronome, patented in 1815, which keeps a steady time so that musicians can keep a beat with more accuracy. How Pop Music’s Bounciness Has Shifted Since 1950. Is Your Band Name Taken? Find Out Here. (This post originally appeared here.) 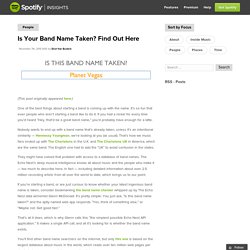 One of the best things about starting a band is coming up with the name. It’s so fun that even people who aren’t starting a band like to do it. Static.echonest.com/popcorn/ 7 Decades, 7 Musical Evolutions. (This post originally appeared here.) 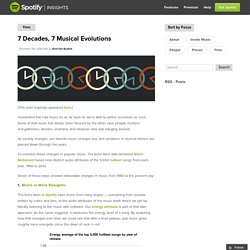 Humankind has had music for as far back as we’re able to define ourselves as such. Some of that music has always been favored by the other cave people, hunters-and-gatherers, farmers, shamans, and whoever else was hanging around. As society changes, our favorite music changes too, and variations in musical memes are passed down through the years. To examine these changes in popular music, The Echo Nest data alchemist Glenn McDonald traced nine distinct audio attributes of the 5,000 hottest songs from each year, 1950 to 2013.

Seven of those ways showed detectable changes in music from 1950 to the present day: 1. The Echo Nest at Spotify sees music from many angles — everything from reviews written by critics and fans, to the audio attributes of the music itself, which we get by literally listening to the music with software. Every Noise at Once. How Men and Women Differ as Music Fans: The Outliers. (This post originally appeared here.) 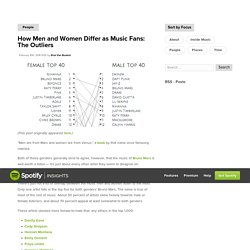 “Men are from Mars and women are from Venus,” a book by that name once famously claimed. Both of these genders generally tend to agree, however, that the music of Bruno Mars is well worth a listen — it’s just about every other artist they seem to disagree on. Here are some key findings: There’s just not a lot of overlap between the music men and women listen to the most. Only one artist falls in the top five for both genders: Bruno Mars. These artists skewed more female-to-male than any others in the top 1,000: These artists skewed more male-to-female than any others in the top 1,000: Accounting for gender bias in either direction, the most popular five artists across both of these groups are…

Exploring age-specific preferences in listening. Earlier this week we looked at how gender can affect music listening preferences. 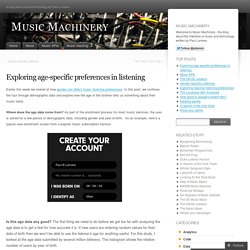 In this post, we continue the tour through demographic data and explore how the age of the listener tells us something about their music taste. Where does the age data come from? As part of the enrollment process for most music services, the user is asked for a few pieces of demographic data, including gender and year-of-birth. As an example, here’s a typical user-enrollment screen from a popular music subscription service: 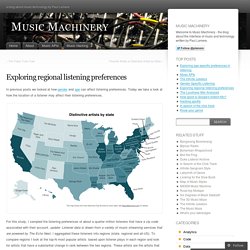 Today we take a look at how the location of a listener may affect their listening preferences. For this study, I sampled the listening preferences of about a quarter million listeners that have a zip code associated with their account. update: Listener data is drawn from a variety of music streaming services that are powered by The Echo Nest.

I aggregated these listeners into regions (state, regional and all-US). To compare regions I look at the top-N most popular artists based upon listener plays in each region and look for artists that have a substantial change in rank between the two regions. These artists are the artists that define the taste for the region. As an example let’s compare Tennessee to New England. The first artist, Hillsong United is the 97th most popular artist in Tennessee for our sample of listeners. New England tastes run to jam bands, indie and classic rock. Every Noise at Once - bulgarian rock. Every Place at Once. A Retromatic History of Music (or Love) Every Noise at Once. 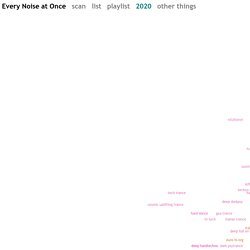 We Built This City. A blog about music technology by Paul Lamere. 4 Road Trip Playlists Data-Crunched from the Crowd. (This post originally appeared here.) We counted 111,690 Spotify playlists earlier this month with the words “road trip” or “roadtrip” in their titles — oodles of great music that Spotify users have chosen with long-distance driving specifically in mind. To channel that sea of music into four playlists you can listen to (below), we first identified the 500 most popular songs in Spotify road trip playlists. As interesting as it is to know that folks enjoy driving to these songs, this playlist is all over the place, musically speaking — Steppenwolf, Carrie Underwood, Iggy Pop, Taylor Swift, Nickelback, Steely Dan, Maroon 5, The Grateful Dead, Kid Rock, Incubus, Norah Jones, and other artists that probably don’t belong on the same playlist together.

That gave us a better playlist of 200 essential road trip songs — still over 12 hours of music, from a messy hodgepodge of genres. Where is the Drama? Anatomy of a Hit: How Mr Probz Came To America. Dutch rapper Mr Probz self-released his song ‘Waves’ late last year. Soon afterwards, German house producer Robin Schulz remixed the song on Soundcloud. Ultra Music and Sony Music Entertainment (SME) co-signed the track and it immediately topped charts in all major EU markets. To date, the track’s had 2.4 million downloads globally, and Mr Probz was streamed a million times a day on Spotify throughout summer, and has kept good momentum since. ‘Waves’ received considerable support from club DJs in Europe. But how did it break America, travelling across the Atlantic and straight into the US Spotify top 40 chart by early April? Careful interpretation of data from the months when ‘Waves’ first started to break out can explain. Put simply, the lean-back mechanism of curated playlists carried Mr Probz across borders that he otherwise would not have crossed.

Search: Finding Mr. Music Migration. Charts. The Distinct Sound of 51 Countries. Exploring music and how people listen to it through data. Sort Your Music. Top US Artists 2014. Top 40 Musical Universities in America: How Students Listen. (interactive map) This fall, millions of students are settling in at the universities where they’ll study, socialize, and prepare for their futures — and that includes discovering music they’ll listen to for the rest of their lives. Maybe it’s all the fresh sounds encountered just as they’re learning new things and working out who they are, but for whatever reason, people tend to establish their music taste at college, and for that matter, during the adolescent to young adult years. The classic rock girl might discover vintage jazz, or the EDM enthusiast gravitate towards hip-hop, and everyone is exposed to lots of new music, no matter where they’re coming from.