What is digital clothing? Fashion influencers live and die by their outfit posts. 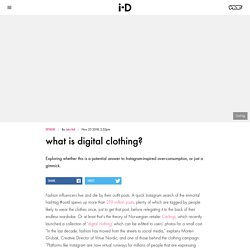 A quick Instagram search of the immortal hashtag #ootd spews up more than 219 million posts, plenty of which are tagged by people likely to wear the clothes once, just to get that post, before relegating it to the back of their endless wardrobe. Or at least that’s the theory of Norwegian retailer Carlings, which recently launched a collection of ‘digital clothing’ which can be e-fitted to users’ photos for a small cost. “In the last decade, fashion has moved from the streets to social media,” explains Morten Grubak, Creative Director of Virtue Nordic, and one of those behind the clothing campaign.

“Platforms like Instagram are now virtual runways for millions of people that are expressing themselves in the most unimaginable ways. [They’re] pushing fashion forward at the speed of light.” Naturally, the collection is custom-built for today’s digital age. Wear Once & Return - Outfit Of The Day. The Fashion Industry Is Getting More Intelligent With AI. As long as humans have started to wear clothes, we’d have the desire to express our own individuality, and one way to achieve that is through fashion. 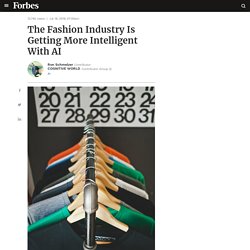 The fashion industry is one of the biggest in the world, estimated at about 3 trillion dollars as of 2018, representing 2 percent of global GDP. Much of brick-and-mortar traditional retail as well as online e-commerce is dedicated to the sale of clothing and fashion items. So much so that Amazon acquired shoe retailer Zappos for $1 Billion in 2010, and major retailers such as Walmart, Target, Amazon, and others have themselves entered into the fashion retail business through their own brands and brand partnerships.

Despite the established nature of the fashion industry, AI is fundamentally transforming the industry from the way that fashion companies manufacture their products to the way they are marketed and sold. AI helping to promote and sell fashion goods. Artificial Intelligence in Fashion Retail – The Fashion Retailer. Fashion Retail is adapting it´s business model at the pace of digitalization. 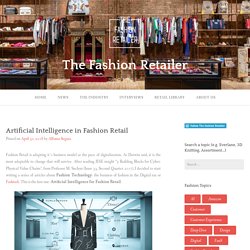 As Darwin said, it is the most adaptable to change that will survive. After reading IESE insight “5 Building Blocks for Cyber-Physical Value Chains”, from Professor M. Sachon (Issue 33, Second Quarter 2017), I decided to start writing a series of articles about Fashion Technology: the business of fashion in the Digital era or Fashtech. This is the first one: Artificial Intelligence for Fashion Retail. source: ai4living.com. Overconsumption of fashion a global phenomenon: Greenpeace Survey. A recent survey states overconsumption of fashion has become an international phenomenon. 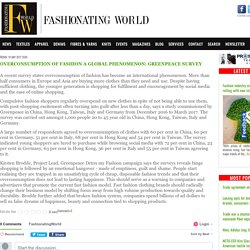 More than half consumers in Europe and Asia are buying more clothes than they need and use. Despite having sufficient clothing, the younger generation is shopping for fulfilment and encouragement by social media and the ease of online shopping. Compulsive fashion shoppers regularly overspend on new clothes in spite of not being able to use them, with post-shopping excitement often turning into guilt after less than a day, says a study commissioned by Greenpeace in China, Hong Kong, Taiwan, Italy and Germany from December 2016 to March 2017. The survey was carried out amongst 1,000 people 20 to 45 year old in China, Hong Kong, Taiwan, Italy and Germany. 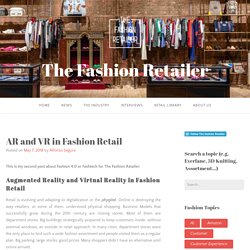 Online is destroying the way retailers, or some of them, understood physical shopping. Business Models that successfully grew during the 20th century are closing stores. Most of them are department stores: Big buildings strategically prepared to keep customers inside, without external windows, an outside-in retail approach.

But Retail Apocalypse doesn´t mean that customers won´t buy anymore in physical stores. Many fashion retail brands are investing in flagship stores but forget second-tier stores. Omnichannel shopping demands a totally different approach to the customer and the way products and services are delivered. Millennials and Generation Z values are different from Baby Boomers ones, and experience is what they want. But, what is Augmented Reality or Virtual Reality? Like this: