Chapter - One step closer to mainstream 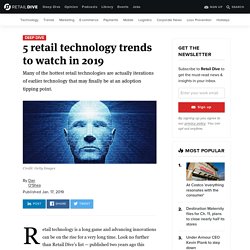 Look no further than Retail Dive's list — published two years ago this month — of the top five technologies we expected to reshape retail in 2017: Robotics; drone delivery; e-commerce anti-fraud tools; blockchain and bitcoin; and virtual/digital assistants. Many of those technologies have yet to see wide adoption. Robotics, for example, was one of the hottest technology topics in retail that year, as several retailers expanded their use in their supply chains. But, two years later retailer the use of robots can't be described as widespread, and is still evolving toward use in-store and for last-mile delivery. Meanwhile, the excitement over drone delivery entering 2017 fizzled out amid regulatory delays, but that doesn't mean the industry has heard the last of this technology.

Customization enabled by tech Get retail news like this in your inbox daily. BOPIS moves beyond mass market. A New Game Could Be Fashion's Farmville. Will People Pay to Play? NEW YORK, United States — A decade ago, if you had told fashion industry veteran Lucy Yeomans she would become a gamer, she would have laughed. 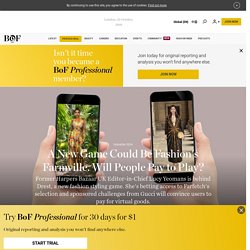 Yeomans spent 12 years as the editor-in-chief of Harper’s Bazaar UK, and was also the founding editor-in-chief of Porter, Net-a-Porter’s editorial arm, which she ran for seven years. The overlap between her readership and video game enthusiasts was likely small. But like countless others, Yeomans stumbled upon Farmville a few years ago. And while she was weeding virtual strawberry farms and caring for digital cattle, Yeomans began to ruminate on the idea of a game that could give users a similarly addictive window into the insular world of high fashion. “I had access to the top photographers, models, and locations ... but most people don’t get such a close look into fashion,” Yeomans said. Her mobile fashion game, Drest, launches October 8. A styling look inside Drest. | Courtesy Drest is launching at a time when the gaming industry is exploding.

How Artificial Intelligence Will Impact The Future Of Fashion. Sophie Hackford spends her time meeting rebel thinkers in remote labs and creative spaces around the globe. Her mission? To find out the technologies that are shaping the future. If the world is becoming a computer, how can the fashion industry use machines to its advantage, or rather, work with them as virtual teammates? “We are being observed and categorised by Artificial Intelligence in parts of our lives that weren’t previously watched,” Hackford begins. “As this great data generator gets closer to us, the only thing that will change is who owns the data and what control we have over it.”

Read more: Why Our Faces Are The New Social Currency Hackford questions whether we have created the “wrong” type of internet. "We will have our own bot, our own little agent, our own avatar to negotiate on our behalf – a sort of digital ambassador," she explained at the Condé International Luxury conference earlier this month. Read more: Apple HomePod: The Smart Home Future Has Arrived.

Why sustainability within fashion is crucial for brands - WGSN Insider. S consumer awareness around the climate crisis and fashion’s heavy impact on it increases, sustainability is a key word on everyone’s lips.

It’s crucial for brands to build this direction into their strategies, right from the start, in order to cater to a more knowledgeable and aware consumer. Vogue Spain’s Fashion Editor, María José Pérez, caught up with, WGSN’s Fashion Director, Francesca Muston, to discuss sustainability and why it’s a necessity within the fashion industry.

Sustainability is a huge topic in fashion right now. There are many actions that can be carried out, but which do you think the (luxury) companies will carry out in the short and medium term? Luxury businesses are able to introduce innovative sustainable materials which are often too pricey for brands operating at a lower price point. Luxury products are also seen as an investment purchase and so are a good counter to the industry’s issue with disposable fashion and throwaway culture. Hypebeast wtvox. With Drest, digital clothing is one step closer to mainstream. Key takeaways: Brands including Gucci, Louis Vuitton and Prada are partnering with tech companies that digitise physical clothing and accessory designs.The primary goal, for now, is testing how digital clothing performs and not making a profit.Long term, digital clothing could offer a more sustainable alternative to fast fashion. 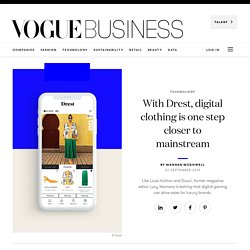 Digital versions of luxury clothing are appearing in apps and video games as brands test consumer appetite for virtual fashion. Drest, a gaming app unveiled by former Porter editor Lucy Yeomans on Monday, invites users to dress photo-realistic avatars in styling challenges, then buy physical versions of those garments on Farfetch. The 75-person startup recruited 100 brands, including Gucci, Prada, Stella McCartney, Valentino and Burberry. Six Italian luxury brands signed up within half an hour of her pitching them, Yeomans says.