Respected Professional. Every Mom-to-Be has a friend who’s “heard a great name” or a relative that’s hinted, “It would be nice if you remembered Grandpa when picking a name . . .” 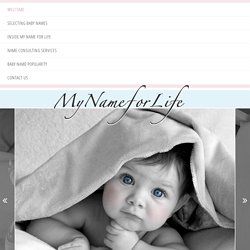 It may seem like the world is full of baby name consultants. My Name for Life is different. It is a personal, private, no-pressure way of getting honest advice and wonderful name suggestions from a respected baby naming professional with experience researching names, writing about names, selecting names and solving naming dilemmas. Articles by CNN, Reuters, The Wall Street Journal have cited the benefits of baby name consultants.

Baby nicknames that make even better names. Charlie is another example of a once-masculine nickname taking on a life of its own. 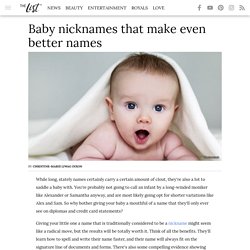 Originally a nickname for the name Charles, Charlie is also used for girls with names like Charlotte and Charlene. These days, the moniker is a popular name in its own right, although whether it's considered masculine or feminine seems to vary from country to country. In the United States, France, and the Netherlands, the name is unisex, but slightly more popular for girls than it is for boys. Smart Name Finder™ - Baby Name Generator. Ἰδιοσυγκρασία. IQ Basics. Graph drawn in Excel using the NORMDIST function. 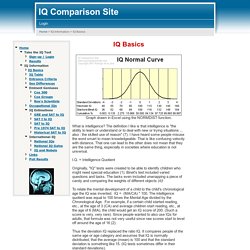 This is a quick explanation of IQ, put up due to popular demand. There are many books on psychology or intelligence that would provide a more rigorous explanation of IQ. What is intelligence? The definition I like is that intelligence is "the ability to learn or understand or to deal with new or trying situations ... also : the skilled use of reason" (7)*. I have heard some people misuse the word smart to mean knowledgeable. I.Q. = Intelligence Quotient Originally, "IQ" tests were created to be able to identify children who might need special education due to their retarded mental development (1).

To relate the mental development of a child to the child's chronological age the IQ was invented. Thus the deviation IQ replaced the ratio IQ. What is a standard deviation (SD)? With the standard deviation and a mean, you can calculate percentiles. There have been various classification systems for IQ. Intellectual Giftedness. Intellectual giftedness, often referred to as high IQ, is usually given short shrift when it comes to considerations of the special needs of exceptional people. 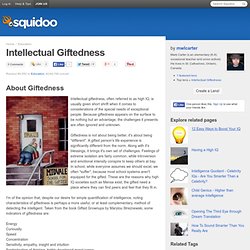 Because giftedness appears on the surface to be nothing but an advantage, the challenges it presents are often ignored and unknown. Giftedness is not about being better, it's about being *different*. A gifted person's life experience is significantly different from the norm. Along with it's blessings, it brings it's own set of challenges. Feelings of extreme isolation are fairly common, while introversion and emotional intensity conspire to keep others at bay. Exquisite Minds: Gifted and Creative Children « Support for Educators and Parents of Gifted and Creative Children "The problems that exist in the world today cannot be solved by the level of thinking that cr. It's alright Ma, I'm only Punding: Stimulants and Compulsions. This post by Johanna Ryan touches on the problems of compulsive gambling and other compulsive behaviors that are linked to Abilify, SSRIs and Dopamine Agonists and also to Dopamine Agonist Withdrawal Syndrome (DAWS). 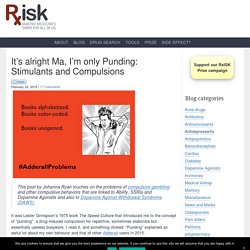 It was Lester Grinspoon’s 1975 book The Speed Culture that introduced me to the concept of “punding”: a drug-induced compulsion for repetitive, sometimes elaborate but essentially useless busywork. I read it, and something clicked: “Punding” explained an awful lot about my own behavior and that of other Adderall users in 2015. The word was coined by a Swedish forensic psychologist, G. Rylander, who studied chronic IV amphetamine abusers. Here’s one account of punding behaviors among “speed freaks” in the 1960’s, which often centered on taking apart and re-assembling objects: Smell sensitivity varies with circadian rhythm. It has always been apparent that some individuals have a better sense of smell than others, but a new study of 37 teens provides the first direct evidence that within each person, smell sensitivity varies over the course of each day. 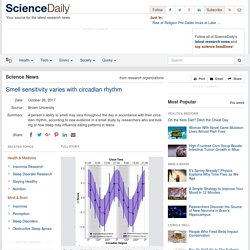 The pattern, according to the data, tracks with the body's internal day-night cycle, or circadian rhythm. "This finding is very important for olfactory perception science," said Rachel Herz, lead author of the study in Chemical Senses and an adjunct assistant professor of psychiatry and human behavior at the Warren Alpert Medical School of Brown University.

"This hadn't been known before and this is the first clear, direct evidence. " As one of the five senses, smell is an important ability, Herz noted, not only for experiencing and enjoying the world, but also for receiving information about danger, such as nearby fire or spoiled food, and for basic functions like eating. Changes in the sense during the day can affect all these capabilities. 28-hour 'days' Sound Sensitivity and Sensory Integration.